Themed on the concept of words’ power to have impact in a challenging world, the German Guest of Honor program has opened at Warsaw Book Fair, and continues this weekend.

‘Siła słów,’ or ‘Words Move,’ is the theme of Germany’s Guest of Honor program at Warsaw Book Fair.

The complete cultural program is here and includes events through Monday (May 22).

On Sunday (May 21), one of the centerpiece events of the collaboration will occur at 1:15 p.m. CEST when the two countries’ foreign ministers, Germany’s Sigmar Gabriel and Poland’s Witold Waszczykowski, will join author Yuri Andrukhovy in a timely panel discussion, “Moving Europe: How Can We Revive the European Idea?”

Under the combined sponsorship of Frankfurt Book Fair, the Goethe-Institut, Auswärtiges Amt, the program is titled Siła słów, or Words Move, in the sense of the power of words to impact current affairs and perspectives.

“At a time when Europe is increasingly under pressure, we want to take advantage of our participation as Guest of Honor to discuss topics that move us: Europe as a place many long to move to, the alarming right-wing populist tendencies in many countries, the effects of the financial crisis – but also questions about shared values and cultural identities.

“More than any other place, an international book fair must be committed to freedom of expression.

“Here, for just a few days, people from many countries come together who champion the dissemination of the written word with passion and expertise.

And in his opening message for the occasion, Gabriel, the German foreign minister, writes, in part, “For understanding to work, we need not just an interested and curious readership but also free and creative authors. Together they build bridges between the different cultures in our world, bridges we currently so urgently need given the many crises and conflicts around the world.”

Speaking for the Goethe-Institut, its Warsaw director, Christoph Bartmann, is quoted, saying that the Guest of Honor program “supports our efforts to establish an intense German-Polish cultural dialogue, even in politically difficult times. The names of the invited authors and the titles of the events reveal that, the wide variety of topics notwithstanding, freedom of expression will be a key topic.”

A 220-square meter German collective stand is in place to house the program, which includes the participation of 66 exhibitors and employees are traveling to the show from 23 publishers including Aufbau, Rowohlt, Suhrkamp, Kookbooks, Gabal and Loewe. 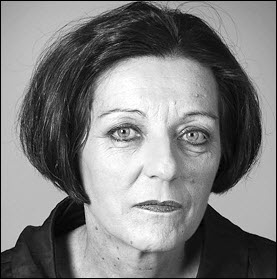 Among key attractions is a visit to the stand by Nobel laureate Herta Müller, whose experiences in a communist regime are highly influential in her work.

Müller’s writings are popular among Polish readers, and more of her books have been translated into Polish than into any other language.

The Romanian-German author is often positioned as an advocate for the defence of human rights., and her conversation with Polish journalist Adam Krzeminski on Thursday was titled “The Words of Every Language Have Different Eyes.”