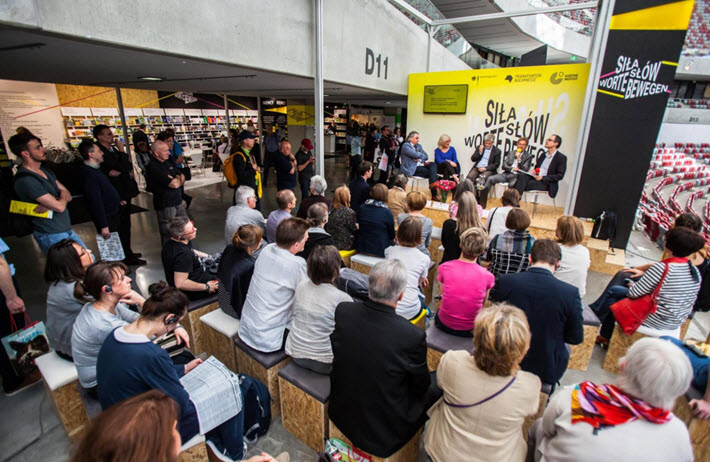 With a ‘shared goal’ of ‘a Europe in which free individuals can reach political consensus,’ Germany and Poland came together at Warsaw Book Fair last week. 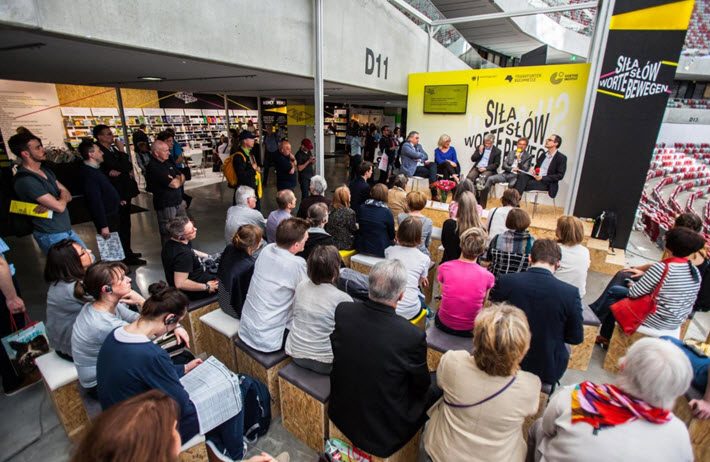 Warsaw Book Fair closed on Sunday (May 21) and with it Germany’s Guest of Honor program mounted in a cooperative effort between Frankfurt Book Fair, the Goethe-Institut, and Auswärtiges Amt der Bundesrepublik Deutschland.

Organizers report that some 2,000 visitors engaged in the events of the project, which was produced under the slogan Siła słów, or Words Move, in the sense of the power of words to impact current affairs and perspectives.

As expected issues of European integration and unity—European values—played a key part in many of the 25 sessions and events, which featured presentations and conversations with German and Polish writers, journalists, and specialists.

Twelve authors from Germany accepted the invitation from Frankfurter Buchmesse and the Goethe-Institut and presented their books in Warsaw, including the Nobel laureate Herta Müller, and Jakob Hein, Charlotte Link, Ulrike Draesner, Wolfgang Bauer, and Yuri Andrukhovych. 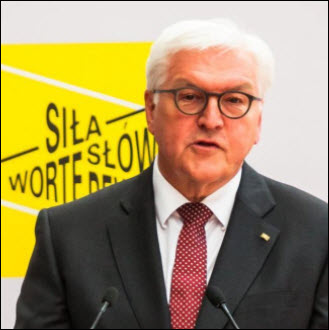 In his remarks at the opening of the German stand, the federal president, Frank-Walter Steinmeier, said, in part, “Our shared goal is a Europe in which free individuals can reach political consensus by using their faculty of reason.

“To enable this, art, and thereby also literature, must be protected from political interference.

“Art and literature are, after all, surprisingly strong when it comes to resisting any attempts at appropriation.”

During the course of the five-day program, Bärbel Becker, international projects director with Frankfurt Book Fair, commented, “It became clear that Germans and Poles are equally concerned about current topics such as how to deal with the question of refugees in Europe or the restriction of freedom of expression.”

And German Nobel laureate Herta Müller is quoted in a prepared statement, saying, “I find it highly questionable when people are overfed with nationalistic thinking and terms such as so-called patriotism or heroism.

“When I read about how many institutions are affected by these things and that people are constantly being replaced, it reminds me a lot of an ideology that is used for marching on through.” 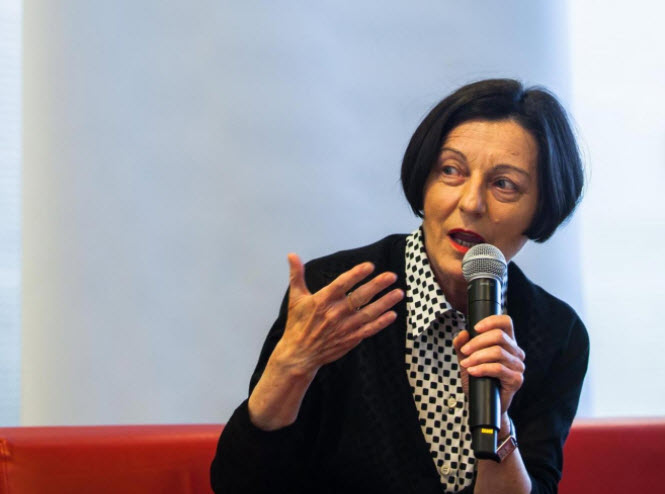 ‘Commitment to Literature and Culture’

Warsaw Book Fair, itself, is Poland’s largest and this year attracted some 75,000 visitors, 800 exhibitors from 32 countries, 1,500 events featuring roughly 1,000 authors. Sixty-six German institutions and publishers took advantage of the occasion to build up their contacts with Polish publishing houses.

Press materials provided by the organizers include the German Poland Institute’s Andrzej Kaluza, saying, “We saw Germany’s participation as Guest of Honor this year as an occasion to give visibility to the German Polish Institute’s commitment to the literature and culture of Poland.

“In addition, we wanted to introduce people to our project ‘Mobile Poland’, which has been running in German schools since 2015, transmitting basic knowledge of Polish language, literature and history to pupils of all ages and in all types of schools on one day.”

Kaluza’s organization was awarded the Prize for the Propagation and Promotion of Polish Literature from Fundacja Kultury Polskiej, the Polish Cultural Foundation.