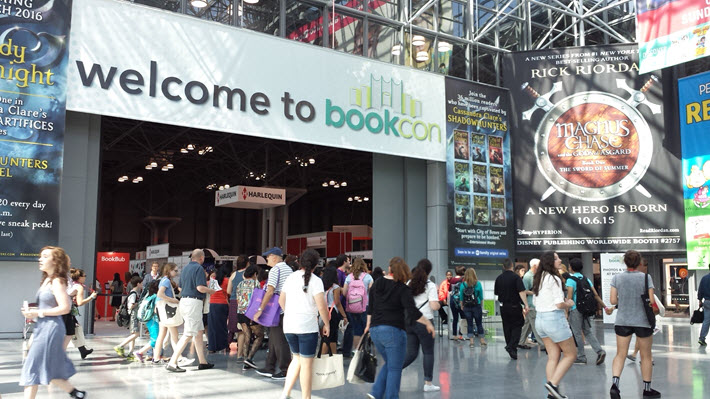 With more adult-content authors on the lineup and three years of experience in New York and Chicago, ReedPOP’s BookCon is gearing up for its annual exercise in book fandom.

Fans enter BookCon at the Javits Center the last time the event was in New York, in 2015. Image: Porter Anderson

Looking for a Wider Demographic

When BookCon was first held in 2014 on the Saturday and Sunday after BookExpo America at Jacob Javits Hall in New York City, it was a sight to behold. A torrent of YA fans—and some of their parents—came pouring onto the trade show floor and began working their way along the aisles on the southerly end of the building.

The fan-fest atmosphere produced by the experienced con-staging teams at ReedPOP, is infectious, exuberant, anything but the professional business setting that BookExpo is on its two industry trade-show days. This is deliberate and fortuitous: BookCon does the direct audience engagement work that BookExpo hasn’t been able to do nearly as well over the years, even when the public was invited to come in on a Saturday afternoon and look around, as wary publishers’ personnel eyed them from the booths.

In 2015, the second year BookCon was held at the Javits, attendance was reported by Rachel Deahl at Publishers Weekly to have jumped to 18,000 over the two days, an increase, she wrote, of 80 percent over 2015. The area of the floor open to the Con-goers had been expanded, too, by some 35 percent.

The key to the Con is star power. While many of the excited attendees at BookCon do know authors and follow them, others are drawn by the actors who appear in films made from popular books.

BookCon had a somewhat less busy welcome last year, when BookExpo and its con moved to Chicago. BookCon was held on one day, not two, and drew about 7,000, according to reports.

As at BookExpo, author autographs are a big draw at BookCon.

Queuing up for Crowd Control

This year, as the tradeshow and con events return to New York City, organizers have talked of wanting to widen the appeal a bit beyond the younger readership.

For the younger appeal, Rainbow Rowell is on the list, as are Cassandra Clare and Victoria Aveyard. One focused event brings together Scholastic authors on panels, one on Saturday and one on Sunday.

YouTubers, of course, have a lot of resonance for many fans, and Connor Franta will be there, ending a tour for his book, Note to Self (Simon and Schuster, April). 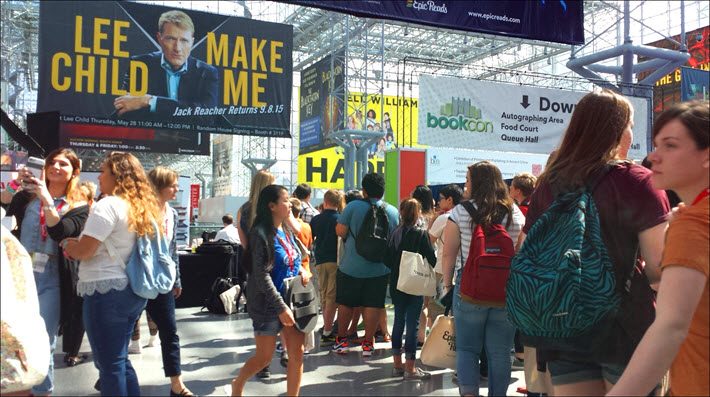 A full listing of those scheduled to appear is here—and they’re alphabetized by first name, not surname. (The BookCon site is easier to get around than BookExpo’s site, at least; no need to wait for each page to load, as happens at the main trade show site.) At this writing, roughly 168 speakers, all told, are being advertised for the two-day event, and adult tickets are currently going for $35 each for Saturday and $30 each for Sunday; kids aged 6 to 12 are offered tickets of $10 on either day. All tidkets must be ordered online, no phone orders.

ReedPOP’s Lance Fensterman has been a con-master for many years and applies what his company knows about fandom and wooing it from a wide array of non-bookish events: comic cons, Star Wars “celebrations,” toy-and-game conventions, you name it. The intent of these events is to bind the fans’ enthusiasm to the content and the artists who create it through a sense of access to those artists in an immersive, high-energy experience.

Here’s a quick and selective look at some of the Main Stage events of note to help you get the flavor of how this works. It’s worth looking at the BookCon Main Stage information page, too, if you haven’t seen BookCon underway in the past, to get a glimpse at just how much crowd control factors into everything that happens on Saturday and Sunday.

Useful sections of the info page, for example, include “Lining Up for the Panel You Want To See”; “Scanning Your Badge To Enter a Panel”; and “BookCon Will Once Again Clear the Main Stage After Each Panel”—meaning there’s no hanging on to that lovely seat you scored in one hour for the next hour. And read carefully the part about scanning your badge for events you want to see in the morning.

Full listings and details on BookCon are here.