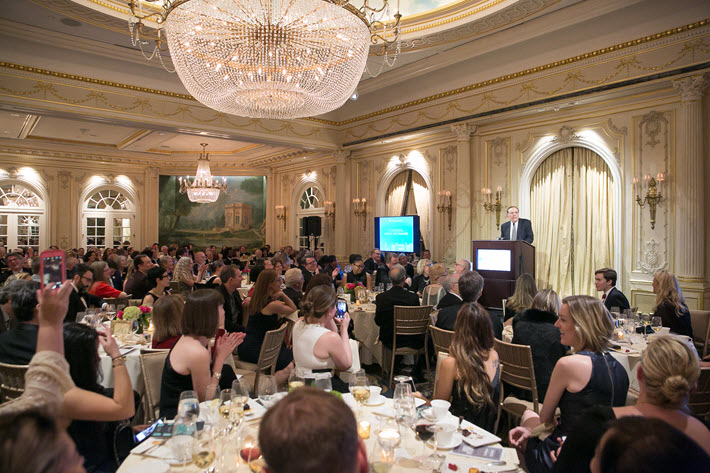 At the Authors Guild’s 25th annual gala in New York, traditional publishing stars and a self-publishing engine are applauded for distinguished service to writers. 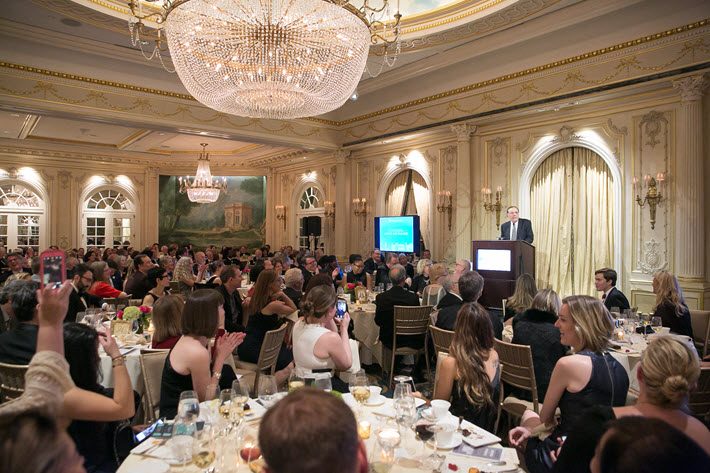 A singular moment in publishing’s development was reached last night (May 24) at the Authors Guild‘s 25th Annual Gala Dinner.

The 9,000-member advocacy organization for authors in the United States gave its Distinguished Service Awards to two iconic members of the traditional publishing industry—and to IngramSpark, a self-publishing platform.

It’s hard to think that this could have happened even four years ago, as IngramSpark was launched.

For most of its 105 years, the guild has been focused largely on the ambitions, needs, rights, and support of traditionally published authors. It was so rooted in that mission, in fact, that by the time self-publishing was becoming a robust, alternative pathway to publication, many authors in the States didn’t see the guild as their advocate.

Disgruntled authors would tell you the nonprofit organization was too cozy with publishers, a country club for blockbuster brand-name writers like one of last evening’s three honorees, James Patterson. And even in kinder moments, the guild was thought by many to be mainly intent on cheering such greats as Nobel laureate Toni Morrison, who also was awarded last evening.

As Roxana Robinson succeeded Scott Turow as president and then was succeeded, herself, by James Gleick—and as Mary Rasenberger stepped into the executive directorship—more membership availabilities were turning up on the guild’s Web site. Here’s an “emerging writer membership,” for example, no need to be published, probably undreamed of a decade ago.

As Rasenberger and her team rolled out its Fair Contract Initiative in 2015 and 2016—basically giving publishers hell for some of the backward and punitive elements of standard contracts—even critics in the indie author community were starting to take wide-eyed notice. The guild joined hands with the UK’s Society of Authors and other nations’ advocacy organizations, quiet no more about needed contract reform. Some of those battles still are being fought. 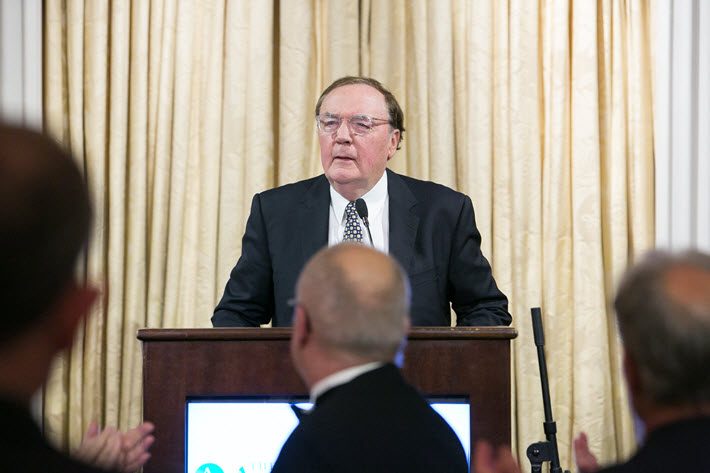 Credit Where It’s Due

There’s no question of the rationale for the honors lavished on Morrison and Patterson at last evening’s guild fundraiser, for “distinguished service to the literary community.”

These are both rightful and generous awards.

And last night’s award to Ingram Content Group’s four-year-old IngramSpark self-publishing platform stands out in a different context, a sign of a new era’s maturity in the guild and in the writerly community it serves. 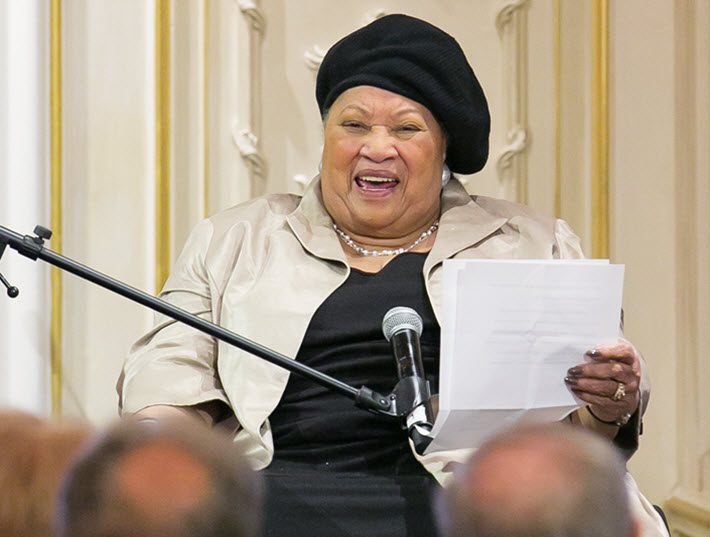 “IngramSpark, we’re really impressed with what they’re doing, opening up platforms a bit and making self-publishing easier for authors.”

And in the guild’s estimation, it may not be first-time, struggling authors who are the biggest guild beneficiaries of IngramSpark’s distribution-rich writer support. Instead, it might be accomplished traditionally published authors, who have a book their publishers aren’t buying or have had their rights reverted and need to publish their own backlist.

Many trade authors don’t know how to take their own work to market, and IngramSpark’s stress on quality—and its ability to make and distribute print books directly to stores through Ingram’s distribution apparatus—can keep those trade authors from falling prey to vanity presses. 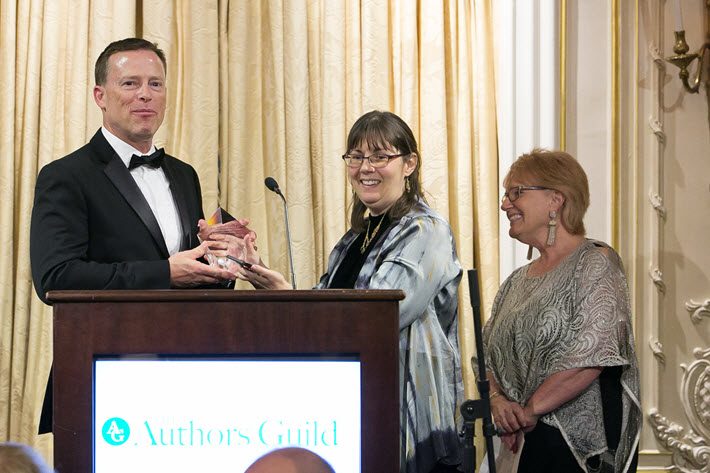 ‘Authors of All Shapes and Varieties’

“At IngramSpark, we’re here to serve authors of all shapes and varieties, from journalists to novelists to poets,”Robin Cutler, IngramSpark

Despite the logic of what Rasenberger is saying, you notice that the guild didn’t turn to the company that actually made self-publishing work a practical option for hundreds of thousands of writers: Amazon. As Rasenberger agrees in conversation, it’s the Kindle ecosystem and the Kindle Direct Publishing program that has made self-publishing fly so forcefully that most seasoned observers now believe the US alone is producing more than 1 million self-published titles per year—although Amazon’s sales-reporting practices are also the reason we don’t have actual numbers on that output.

Amazon’s relationship with the industry remains a bitter topic for many, and the guild’s most recent comment on the Seattle retailer (which just opened an innovative new data-driven set of bestseller lists), was a complaint about the much-debated adjustment to third-party vendors’ access to a book’s “buy box” at Amazon.com. “Amazon has already done enough damage in the book industry,” the guild’s article reads–ironic language for the retailer that’s sold more books than any other in history.

Years from now, it’ll be interesting to see how the industry’s stance on these issues holds up in retrospect. But few today might dispute the guild’s choice for an honoree of IngramSpark: it’s easily among the most highly regarded author-service operations on the international scene. 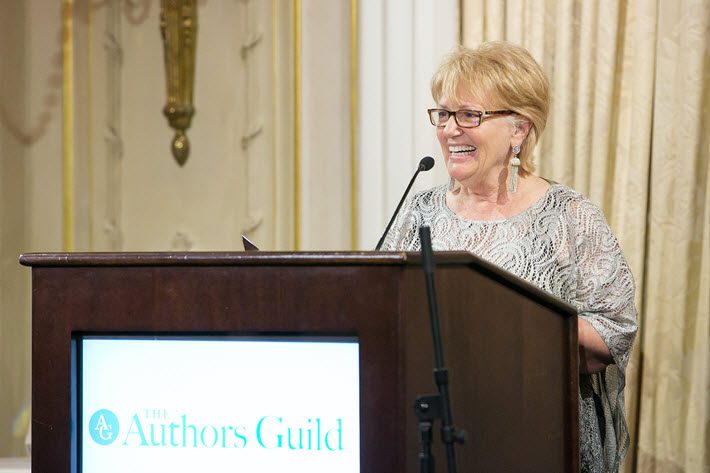 “What we want to do is remove the trash that authors have to go through and lower the hurdle of learning how to publish your own work.”Robin Cutler, IngramSpark

‘I’ve been shocked ever since I heard” about the award, says IngramSpark’s director, Robin Cutler. “Shocked and delighted at the same time.”

Publishing Perspectives had a chance to talk with Cutler shortly before she accepted the guild’s award last night, along with Ingram Content Group vice president Kelly Gallagher.

Cutler makes no secret of the pleasure and surprise with which the guild’s signal honor has come IngramSpark’s way. “For the guild to embrace a self-publishing platform like this is kind of astounding,” she says.

There’s logic here, though. There’s a crisp, businesslike seriousness to IngramSpark’s presentation of itself and its services to the author corps, not unlike that of the guild itself.

“We don’t coddle” authors and small publishers who use IngramSpark’s services, Cutler says. “But we are doing things to help in better ways. For example, we’re looking at file formatting being part of what you can do at IngramSpark. You can bring in a file, and once it’s edited and even designed, we’ll help make sure it’s print-ready and also can be distributed as an ebook. That’s where even the professionals struggle.”

That phrase “print file” means a lot to many indie authors operating on IngramSpark’s platform. Not only can the company supply authors and small publishers with print editions on an as-needed basis through its ubiquitous print-on-demand facilities, but a book printed and distributed through Ingram’s continent-jumping channels is also recognized by booksellers—while the reception can be a lot less welcoming for books coming from Amazon/CreateSpace.

And yet when asked how the arrival of IngramSpark on the scene played out for the company in 2013, Cutler says, “You know, we did a soft launch because we were really concerned about confusion with Lightning Source ,” Ingram’s B2B publisher-services platform.

“When an author is selling well into the channels, that’s what we want. We’re a distributor. We want to distribute your book and sell it through.”Robin Cutler, IngramSpark

Cutler says that while the company was taken aback by how many authors turned up ready to work with IngramSpark right away, “we did make a mistake at the beginning, something we quickly corrected. We launched Spark with an automatic trade discount applied on the print side.” That’s normally a 55-percent discount to retailers. It quickly clear that some authors didn’t want the standard bookstore trade discount applied automatically. “A lot of sales are made online now,” Cutler says. “To ‘put your book up with  a shorter discount, you now can put your book up with anything between a 30- and 55-percent discount.”

Cutler has made a key part of her job appearances at writing conferences, putting a face to the business, meeting and talking with authors in the straightforward, low-hype approach that IngramSpark brings to the field.

“And meeting Orna Ross,” the founding director of the Alliance of Independent Authors (ALLi) at an “indie fringe” event after London Book Fair 2015 at Foyles, she says, “has really gone a long way toward establishing us internationally.” ALLi counts 45 percent of its membership in the States and 46 percent in Europe, making much of its indie-advocacy work run parallel to the reach and scale of IngramSpark’s.

Cutler and the IngramSpark team are steadfastly pleasant, relaxed, and even-handed when referencing Amazon. Their demeanor in such a highly charged arena as self-publishing and its proliferating platforms, becomes an object lesson to authors, in itself.

“We’re a business,” Cutler says, echoing an insistence on professionalism that runs through many of the entries on IngramSpark’s blog for authors. “We work with every entity that has anything to do with publishing. Amazon is our biggest customer. We’re not about to alienate them. And it’s been revolutionary what Amazon has done” in leveraging the Kindle ecosystem for self-publishing.

“At IngramSpark, we’re here to serve authors of all shapes and varieties, from journalists to novelists to poets,” Cutler says. “I’m just thrilled that we do that. We’re agnostic, yes, but we enable anybody who wants to use our service to make their work widely available. That’s our purpose and we’re really clear on that. What we want to do is remove the trash that authors have to go through and lower the hurdle of learning how to publish your own work.”

And now the Authors Guild, barely into its second century, has stopped and honored the efforts of IngramSpark, which speaks the languages of both authors and publishers.

“When an author is successful,” Cutler says, “that’s when we benefit financially. When they’re selling well into the channels, that’s what we want. And that’s what we want our authors to do. Not just to be buying print services from us.

“We’re a distributor. We want to distribute your book and sell it through.” 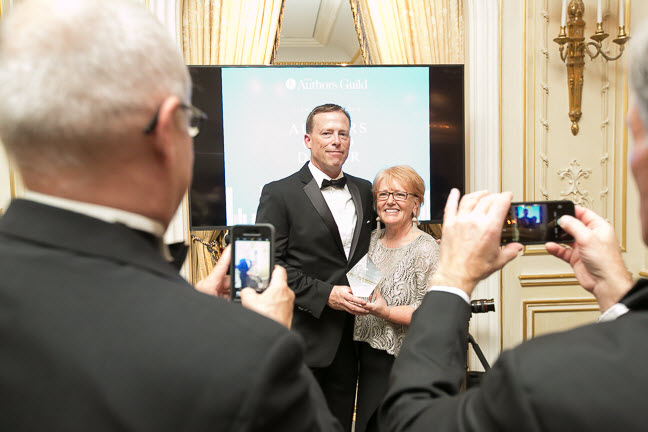