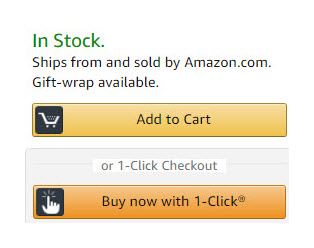 Author and publisher groups are raising the alarm over a change in Amazon’s third-party sales policy, which the retailer says simply brings books in line with ‘the rest of Amazon.’

The Authors Guild, late Monday (May 8) released a toughly worded statement on what it describes as “Amazon’s new policy of allowing third-party book re-sellers to claim featured status in the ‘buy boxes’ on Amazon.”

“This has the potential to decimate authors’ and publishers’ earnings.”Authors Guild

The development was described recently to Publishing Perspectives by a distributor in the industry. The effect is that when a consumer goes to a book’s sale page, the first option to buy in each format may not feature the book’s publisher’s offer, as has been the case in the past.

Below is a set of buy-option boxes chosen at random. They’re from the sales detail page for a recently published title from HarperCollins’ Ecco imprint.

Critics of Amazon’s new policy say that re-sellers, not an original publisher, may have their editions featured in buy-option boxes on books’ sales pages.

If a re-seller is getting a sale, the “ships and sold by” line on the buy button will change to that vendor’s name.

What the newly instituted Amazon approach may do, the Guild and others are saying, is promote one of the editions you normally see under a box (such as “35 New from $11.65”) into the featured spot.

That, in exchange would result in the “buy button” on the page taking the sale not to the publisher but to the third-party re-seller, presumably at a discount.

Publishing Perspectives’ own tests have not yet rendered a case in which the original publisher isn’t offered as the featured option.

The Independent Book Publishers Association (IBPA), however, cites a case in which a book by Cami Ostman, Second Wind: One Woman’s Midlife Quest To Run Seven Marathons on Seven Continents, had a buy button going to a vendor rather than to the original publisher, Seal Press.

In that case, the third-party re-seller is offering the paperback new for $3.23, while the Seal Press price was $10.62.

The buy box at Amazon.com for ‘Great Philosophers Who Failed at Love, May 9, 2017

In another instance provided by an industry observer to Publishing Perspectives—Andrew Shaffer’s Great Philosophers Who Failed at Love (2011, Harper Perennial)–the $6.98 new edition that’s the default on the buy button is from a third-party seller named Big River Books. 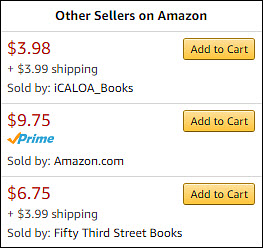 The ‘other sellers’ box at Amazon.com for ‘Great Philosophers Who Failed at Love,’ May 9, 2017

But looking below the buy button box to “Other Sellers on Amazon” reveals the $9.75 price asked for the same new paperback by the publisher. This is clearly a case in which the third-party re-seller’s offer is taking the lead in Amazon’s listings.

The new program is based on re-sellers vying for the featured spot on these buttons, as Publishers Weekly‘s Jim Milliot covers it.

In response to Publishing Perspectives‘ inquiry, a spokesperson for Amazon says:

“We have listed and sold books, both new and used, from third-party sellers for many years.

“The recent changes allow sellers of new books to be the ‘featured offer’ on a book’s detail page, which means that our bookstore now works like the rest of Amazon, where third party sellers compete with Amazon for the sale of new items.

“Only offers for new books are eligible to be featured.”

“The recent changes allow sellers of new books to be the ‘featured offer’ on a book’s detail page, which means that our bookstore now works like the rest of Amazon, where third party sellers compete with Amazon for the sale of new items.”Amazon Statetment

The Authors Guild article stresses what it sees as a distinct disadvantage to authors and publishers: “A secret algorithm–which reportedly weighs factors such as price, availability, and delivery time–will now decide which seller (i.e., Amazon or a third party re-seller) gets the buy box.

“Amazon’s new policy states that ‘eligible sellers will be able to compete for the buy box for books in new condition.’ What this means is that second-hand book distributors—who often sell at extremely steep discounts—will be able to claim that premium real estate if they can beat out the publishers’ copies under the algorithm.”

The financial issue here, as characterized in the Guild’s statement is fundamental: “The problem with this outcome from an author’s perspective is that neither the publisher nor the author gets a cent back from those third-party sales. Only Amazon and the reseller share in the profits. This has the potential to decimate authors’ and publishers’ earnings from many books, especially backlist books.”

In its statement, the IBPA writes, “When you buy a book, Amazon pays the publisher 45 percent of the list price. This means your purchase is supporting the entity that published the book, namely the publisher, and authors are making a profit (albeit small) every time you buy because the publisher is paying an author royalty for each sale.

“Now Amazon is giving that priority spot to third-party sellers, relegating the publisher button to a far less favorable position, below the landing page screen line, often last in a list of third-party sellers offering the book for a significantly lower cost in addition to free shipping.”

But one of the vexing elements of the situation for industry critics has to do with how “new” copies are available from second-hand sellers. The Guild writes:

“One might wonder how there can be ‘new’ copies offered by someone other than the publisher and how they can be sold for $.01 plus shipping (the high shipping costs are apparently where these sellers make their profit).

“The Authors Guild has spoken to several major publishers in the past year about where all these second-hand ‘new’ copies come from, and no one seems to really know. Some surmise that they are review copies, but there are far too many cut-rate ‘new’ copies for them all to be review copies.

“Could they be returns from bookstores that never made it back to the publisher? Did they fall off the back of a truck? We don’t know. What we do know is that the re-sellers must be acquiring them at cut-rate price and that there appear to be enough of these copies available that they could replace sales for the truly new copies—those that bring money to the publisher and royalties to the author.”

If the books offered by third-party re-sellers are actually new, then payment should have been made to a publisher, and thus to an author. That makes it difficult to be sure that a sale made by a third party of a new book on Amazon is, in fact, a complete loss of revenue to a publisher and author.

The Authors Guild further speculates that the new policy may be related to Amazon’s POD (print-on-demand) services offer, but sources Publishing Perspectives is in touch with at Amazon say that this is not the case. There is, they say, no link between opening the buy box to third-party new booksellers, and Amazon’s POD offerings.

And in a piece today (May 9) on the issue, Publisher’s Lunch’s Michael Cader writes, “Angry notes will not change the situation. People should be thinking about productive responses and solutions over complaints. To that end, Penguin Random House has according to an Amazon seller forum been emailing third-party Amazon booksellers since mid-April, asking ‘specifically how and from whom you are acquiring our books.'”