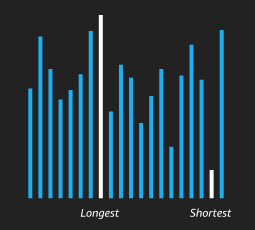 By tracking user activity, the retailer feeds its Amazon Charts with consumer data on what’s being read and listened to (in digital) and what’s being sold on a weekly basis. 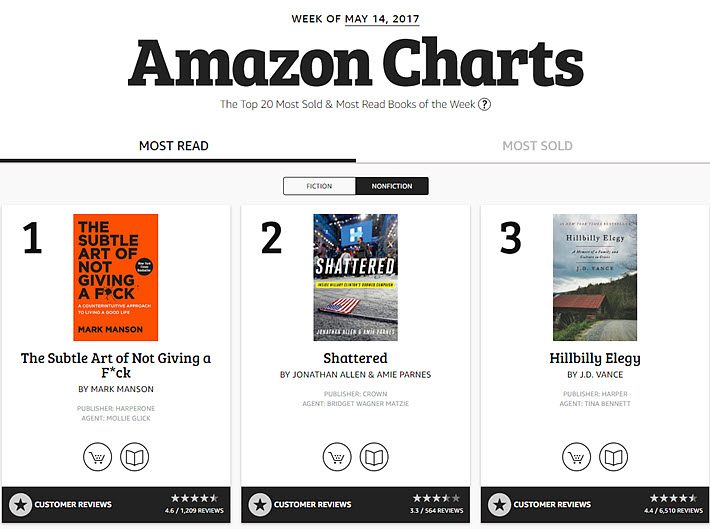 The inaugural Most Read nonfiction list at Amazon Charts is led by Mark Manson’s ‘The Subtle Art of Not Giving a F*ck’ from HarperOne and agent Mollie Glick. Image: Amazon Charts

‘Data Across All Reading Formats’

Even as we were publishing news about a “Consumer Centric Data” session coming at BookExpo, Amazon was launching a new demonstration of what that concept can mean: data-generated bestseller and best-read charts.

And the initial reaction to the advent of Amazon Charts is quite welcoming, for an industry that sometimes scoffs first and listens later when the word Amazon is in a phrase.

The response’s relative warmth may be partly due to the fact that Amazon—which is a technology company, after all—is doing something here that the rest of the industry simply cannot do. Only Seattle knows what Kindle and Audible consumer data can reveal about what’s being read and listened to. And, coming from the world’s largest seller of books by far, this is consumer-centric data of a kind that’s potentially both useful and fascinating.

Amazon Charts, which went live this morning (May 18), is termed by the retailer as “the first ever bestseller list to measure the books millions of Amazon.com customers are really reading and listening to.” It’s a weekly set of Top 20 bestseller rankings that’s created “by looking at the average number of daily Kindle readers and Audible listeners.” Adult and children’s listings are included, which is interesting in itself to those of us accustomed to heavily parsed listings.

Some explanatory copy from the press announcement: “The Top 20 Most Sold list ranks the most books sold, pre-ordered or borrowed each week from Amazon.com, Audible.com and Amazon Books.

“Amazon Charts include data across all reading formats—whether books are bought or borrowed, listened to or read–to accurately reflect how readers are really reading and buying books today.”

An element of the listings we like is that under a book’s cover art thumbnail you read not only the author and publisher’s name but also that of the book’s agent. It’s about time our literary agents were credited along with authors and publishers. 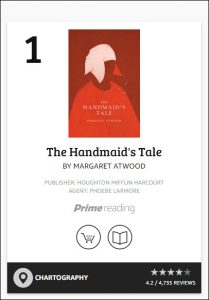 Let’s look a bit closer at these listings. Keep in mind that while Most Sold listings can include print editions as well as digital, the Most Read (and listened to) listings are based in digital formats. 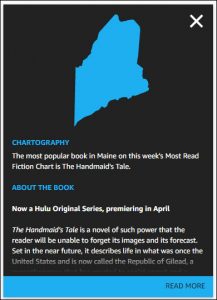 No. 1 under both Most Read and Most Sold this week in fiction is Margaret Atwood’s The Handmaid’s Tale from Houghton Mifflin and agent Phoebe Larmore. (See our two-part interview with the illustrators of the book’s beautiful Folio Society edition here and here.)

If you click on the “Chartography” link at the bottom of the listing, you get some additional information about the book. For example, on this title, we read, “The most popular book in Maine on this week’s Most Read Fiction Chart is The Handmaid’s Tale.”

Similarly, at No. 7, we find Paula Hawkins’ new Into the Water from Riverhead Books and agent Lizzy Kremer. Click on the “All Ears” note on the right, and you learn that “More readers listened to Into the Water on Audible than read the book on Kindle this week.”

Between the Most Read and Most Sold lists lie some interesting insights. For example, Jay Asher’s Thirteen Reasons Why (Razorbill, agent Laura Rennart) about teen suicide—a book that has caused some amount of controversy around its Netflix adaptation—is No. 13 on the Most Sold fiction list but does not figure into the Most Read list.

Not Based on Opinion

As David Naggar, Amazon vice president, says in a prepared statement, one of the things this set of bestseller lists does is take opinion out of the equation. He’s quoted saying, “Many well-known bestseller lists today add, remove, or re-rank books based on editorial considerations and customers have asked for a bestseller list that is based on reading engagement and sales data, rather than an opinion-based list of what books they should be paying attention to.”

There’s an irony there, of course, in that Amazon is the retailer whose development of consumer reviews has led the industry so far down that multi-starred path that we probably will never come back from the tyranny of Mr. and Ms. Shopper’s abundant opinions about absolutely everything.

Here, for once, Amazon is showing us another way it’s able to understand consumer action around the industry’s books. And those customer reviews and star rankings are right there on every Amazon Charts listing, fully clickable so you can commune with the Shopper Family to your heart’s content.

And of course, this is still based in the activity of the customer, that all-important player in the Amazon philosophy. What makes this different is that instead of flinging stars and diatribes at books, the customers are voting with their feet: this tracks how they’re spending their time (reading) and money (buying) books.

More cool information: No. 8 this week is the Dr. Seuss entry Oh, the Places You’ll Go! from Random House Books for Young Readers, and a click on “By the Numbers” tells you that this is “the shortest book on the Most Sold fiction chart this week; Beneath the Scarlet Sky is the longest.”

No. 19 on the Most Sold list, Winter Renshaw’s The Perfect Illusion, we learn, is finished faster by both readers and listeners “than similar books,” we learn in a tip called “Unputdownable.”

On any listing, click on the book icon and you’ll be taken to the book’s sample. And click on the shopping cart and–no, it doesn’t put the book into your cart, as most of us might expected. Instead, it helpfully takes you to the details page where you can sort out which format you’d like, as usual.

And for those of us who now count Alexa among our girlfriends, the Amazon Echo device’s voice-activated sweetheart will read the current Amazon Charts listings to you. Just ask her, “Alexa, what are the most popular books this week?” 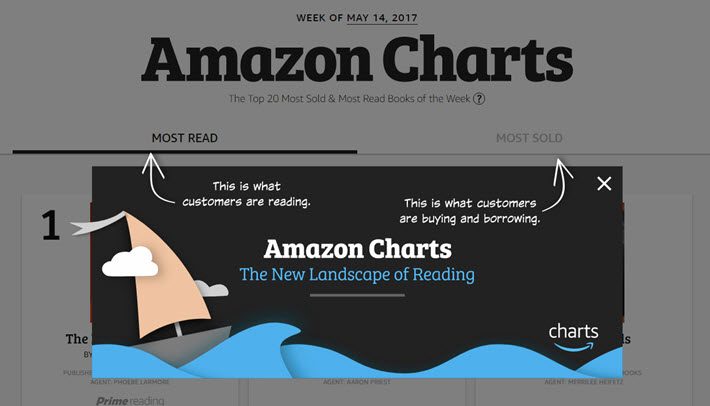 On your first arrival at Amazon Charts, this overlay points out to you the two major sides of the list, Most Read titles are the default display, and Most Sold (which include both sales and borrows) are the option you can toggle to. Image: Amazon Charts

Reactions in the Early Going

In his generally receptive writeup, Publishers Lunch’s Michael Cader does point out that the Amazonian interpretation of what’s “selling” includes the several lending and/or subscription options available on the platform. He writes, “On the downside, the ‘sold’ list still has Amazon’s own thumb on the scale, counting digital products ‘borrowed’ through subscription programs including Kindle Unlimited, Prime Reading and Audible as ‘sales.'”

Nevertheless, he also is right in indicating that you can tell when lending or subscription programs are contributing to a book’s performance. Look for the Kindle Unlimited or Prime Reading logo.

Those in the industry who monitor the self-publishing sector will be interested in this part of Cader’s commentary, too: “The inaugural Kindle fiction list has no self-published titles—17 books are traditionally published and the other three are from Amazon Publishing.” On the Most Sold side, however, there are two self-published title, he writes, selling for $1.99 and 99 cents respectively.

At Publishers Weekly, Jim Milliot clarifies that the list for a week ending each Sunday will be posted on Wednesday. He also reports that Naggar says some of the new Amazon Charts data will be used in those rapidly proliferating Amazon Books physical stores