‘How Can We Make Schools More Digital?’

Within the last year and a half, says Benjamin Wüstenhagen, the debate on digital education in Germany has intensified. “Because,” he says, “when you actually look at schools in Germany, there’s still not much digital stuff going on.”

Wüstenhagen is the co-founding managing director of K.lab Berlin, a six-year startup trying to blaze a trail of APIs to an edu-tech landscape in which publishers can better monetize their educational content. He speaks on Tuesday, the second day of Klopotek’s Publishers’ Forum conference in Berlin, in a session about getting publishers’ content into the digital infrastructure.

“You see schools here and there with iPad classes, but mostly you find out there’s no content,” Wüstenhagen says. “When you look at the big publishers, you see no one making considerable amounts of money with digital content. So the whole discussion here is, ‘How can we make the schools more digital?'”

“Plus there’s a huge discussion, as always in Germany,” Wüstenhagen says, “when it comes not only to copyright but also to data security and data privacy.

“So there’s a lot of discussion now, even though there’s not much digital in the classroom yet.”

And how does he approach the German educational market?

“Even in 2017, having a proper, fast-working wi-fi system in your school so every student and teacher can log on?—is rare.”Benjamin Wüstenhagen

“It’s not one market,” he says. “There are 16 markets here because every state is regulated differently: education is a state thing. Every state has its own data privacy” constraints, “a huge topic now,” which can cause such topics as adaptive learning or learning analytics to stall out in discussion. This, of course, does little to encourage publishers to work on creating new digital content that might one day generate substantial revenue.

And then there’s the infrastructure element of the issue. “Even in 2017,” Wüstenhagen says, “having a proper, fast-working wi-fi system in your school so every student and teacher can log on?—is rare.”

In an interesting divide that comes to light in Wüstenhagen’s work, he says, “Everything that’s content comes from the state” in the German system, while “everything that’s connected to the building, the chairs, the roof, the technology comes from where the school sits: the city, the county—so there’s no scalability there. You talk to a school in Munich and you talk to a school in Hamburg, it’s a completely different story.

The questions his team of some 30 K.lab staffers, then, wrestle continually with two questions that he phrases this way: “How are we going to introduce this? And who’s going to pay for it?”

In terms of the second question—who pays for it?—one of the most intriguing elements of K.lab’s progress is that schoolteachers are paying for the company’s main product, themselves, from personal funds, Wüstenhagen says.

K.lab’s meinUnterricht translates to “My Class.” In some cases, teachers use it to access content for their classes. But where electronic delivery to the classroom isn’t available, he says, “most of the teachers download the content as a PDF, print it out, and hand it to the students.

“So the whole question of deliverability of digital content just isn’t there yet,” Wüstenhagen tells Publishing Perspectives. “You can’t say that most teachers reach their students in a digital way.”

While it’s a compliment to K.lab that teachers think so highly of its offering that they’ll pay for it from their own pockets, Wüstenhagen notes that teachers in Germany are accustomed to paying for print subscriptions to magazines. “Many are willing and able to pay, although obviously the state should provide this.”

While some school systems are “opening up a little bit,” he says, to the idea of funding more digital capability, “it’s just not enough for a publisher can make much money” on producing digital content.

“We say to publishers, ‘You concentrate on creating content and we’ll do all the back-end and API work.’ That way, they can get to market quicker.”Benjamin Wüstenhagen

Ultimately, he says, the expanse of so many distinctive challenges in the K-12 market in Germany, these things he wrestles with daily, is what drives many companies to pivot “to higher education or to corporate learning.”

K.lab has two key approaches, then, to this multilayered marketplace: (a)  seeing teachers as the customer, Wüstenhagen says, and (b) making a market of publishers whose expertise isn’t in the realm of digital delivery. “We say to publishers, ‘You concentrate on creating content and we’ll do all the back-end and API work. That way, they can get to market quicker.

“But as long as the market isn’t there, not so many are doing this. You see smaller publishers going there some, but as a strategic thing for the future, not as something to do now to make money.” 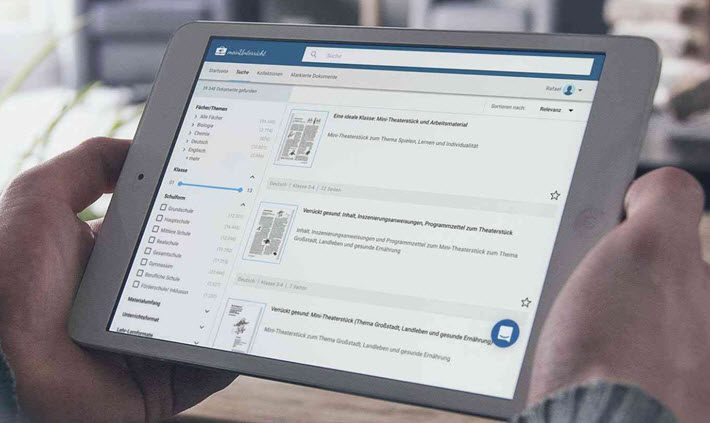 ‘Nobody Can Be Blamed’

It’s as if the whole issue is holding its breath. “What you don’t see here in Germany,” Benjamin Wüstenhagen says, “is early adoption.”

And the problem, in his analysis, is not resistance but the fractured nature of the system making it hard to see a way forward.

“Nobody’s trying to avoid it,” he says. “It’s more about how fast things are moving, the struggle between the federal government and the states, and the question of who’s adopting what—what can be decided on a higher level?—and what has to come from the teachers” in terms of what they want and can use efficiently.

“Also, you have to have IT support,” something everyone understands as a serious consideration in such issues, as is the question of how thoroughly a school may be equipped. “You’ll have 50 percent of the classrooms outfitted with a projector and 50 percent not. So we have to go school by school and teacher by teacher” at this point.

Benjamin Wüstenhagen has a resilient, upbeat outlook, something many longtime startup founders can admire, as he works to help develop the edtech context for Germany—in which publishers understand how APIs can make classrooms and teachers agnostic as to which publisher’s content they can use, and in which school authorities might pursue digital development more aggressively.

“Nobody can be blamed,” he says. And the effort goes on.