‘Writing and art are the kind of thing that’s going to bring us together,’ says Mohammed Hasan Alwan, 10th winner of the Arab world’s most sought-after literary award.

Filled with humility in interview, Saudi author Mohammed Hasan Alwan clearly is thrilled at the moment Tuesday in Abu Dhabi when it’s announced that he’s won the US$50,000 International Prize for Arabic Fiction backed by the Booker Prize Foundation. Image: IPAF, Kheridine Mabrouk

A ‘Symbol of the Traveler’

Not long after being named this year’s winner of the International Prize for Arabic Fiction, Saudi author Mohammed Hasan Alwan has moved to his hotel in Abu Dhabi to take a reporter’s call in quiet.

Long involved with the Arab world’s most prestigious literary award—not only as a former shortlisted writer but also as a writers’ workshop member and mentor to others—he’s a cordial, measured conversationalist who likes to get things right.

“I’m between Toronto and Riyadh,” Alwan says, correcting some reports that imply he lives only in Ontario now. The writer is, it turns out, a traveler like his latest lead character.

The subject of his novel, A Small Death, is the 12th-century Sufi master and poet Muhyiddin Ibn ‘Arabi, who, like Alwan, might have at times told people that he was between one place and another. While some might assume that the more challenging aspects of Sufism as Islamic mysticism would be the attraction for a contemporary writer, “It’s not the controversy that drew me to Ibn ‘Arabi,” Alwan tells Publishing Perspectives.

“It’s his passion for travel,” Alwan says, “that drew me. Every two or three years, he’d move to another place. ”

And this wasn’t related to any sort of Old World punitive pressures, but seemingly a wanderlust that was triggered when Ibn ‘Arabi’s family moved to Seville from Spain’s more southerly Murcia region. Having undertaken the Hajj, he lived in Mecca for three years and then set out on the itinerant life that Alwan finds so interesting.

Ibn ‘Arabi would live in many parts of the Middle East and Mediterranean world.

“He was never pushed to travel by any economic or political reason,” Alwan says. “It was his passion to move from one place to another. What could he possibly have seen in all these places? He’d been exposed to the political rule of four empires. I was thinking what must his memory hold?

“Some of the great travelers of the Islamic world that we know of, he had traveled more than them. He was known as the Sufi symbol of the traveler.”

“I find that it’s the responsibility of both the host and the guest to undertake the mission of mutual understanding. And you must keep asking the host for tolerance.”Mohammed Hasan Alwan

Alwan points out that today, Sufism is appreciated in some parts of the Islamic world, while in other places its practitioners are considered heretics. In general, he says, there’s no global position to be taken, as “Sufism is so many things,” he says, “and is looked at so differently.

“From my perspective, I see it as having great potential to be a kind of bridge. I’m not a Sufi, myself, but I think this represents a kind of separation—not between cultures but inside them.”

Alwan is talking about isolationism, xenophobia, the kind of populist contexts that seem to be proliferating in many parts of the world, tearing open chasms within societies. Hatred today, he says, can appear as an intra-cultural phenomenon “in ways we haven’t seen before”—in this case, at times meaning attack and persecution of a part of Islamic heritage from within its own cultural community.

“You wonder if this kind of division isn’t really human nature.” 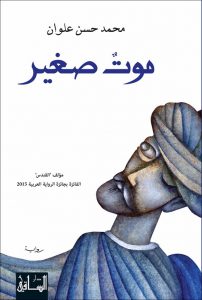 Mohammed Hasan Alwan’s ‘A Small Death’ is published in Arabic by Dar Al Saqi and will be translated into English thanks to its win of the International Prize for Arabic Fiction.

Alwan, by contrast, says he has warm feelings for his experiences as a Saudi Arabian Muslim in both Canada and the United States. Not only did he take his doctorate in Canada, but he was also in school for a time in Portland, Oregon.

“I like Canada,” he says, “there’s a lot of beliefs I share with the people. Of course, they’re very polite people. But the foundation of Canadian values, I find myself in harmony with them. I’ve never found myself a stranger in Canada.

“And the same for the States, when I lived in Oregon for two years to get my masters.”

Having taken his BA in computer information systems at King Saud University in Riyadh, he was at the University of Portland to take an MBA before taking his PhD in international marketing, at Ottawa’s Carleton University. With some background not only in business but also in journalism, Alwan has worked as a columnist at two newspapers, Alsharq and Alwatan, in Saudi Arabia.

Alwan pauses for a moment in the deepening nighttime of the Arabian Gulf. In real time, it’s been about three hours since he was named the IPAF winner.

While he has revealed nothing but the most unassuming winner’s bearing to this point, there’s suddenly a note of distinct pride in his voice when he speaks again. “I’m actually receiving those friends’ messages and emails right now,” he says, emphatic in his appreciation of the congratulations flying to him from thousands of miles and many time zones away.

Quickly collecting himself, he picks up his earlier thought. “I find that it’s the responsibility of both the host and the guest to undertake the mission of mutual understanding,” surely something Ibn ‘Arabi may have said to us in his day, too.

Clarity, Alwan says, of intent, of purpose, is extremely important, “and you must keep asking the host for tolerance”—a message many might like to see land well in Washington and London, Paris and Pyongyang, Ankara and Aleppo.

‘Who Else Builds Borders and Walls?’ 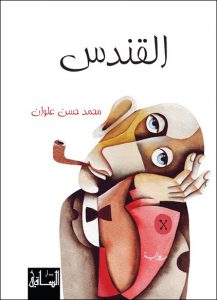 Mohammed Hasan Alwan’s ‘The Beaver’ has been translated into French and Norwegian. It was shortlisted in 2013 for the International Prize for Arabic Fiction.

Of all things, Alwan’s earlier novel shortlisted in 2013 for the International Prize for Arabic Fiction, The Beaver (Al-Qundus), “was written,” he says, “because of my studies in Oregon. While I was there, I saw a beaver for the first time in my life. It got my attention.

“I found myself, a year later, writing a novel about the social behavior of beavers. We know that the beaver isn’t the only animal that will destroy an entire forest just to build a home. They change their environment. Guess who else changes the environment.

“So I wrote this novel about a Saudi man going through a midlife crisis. He decides to travel, and he chooses to go to Portland, Oregon. There he meets the beaver and explores all commonalities between his own family and the beaver.”

While The Beaver has yet to be translated into English—and sounds like a kind of Arabic Animal Farm well worth exploring for translation by a publisher interested in this highly regarded work—it has, Alwan says, been translated into both French and Norwegian. In its French translation by Stéphanie Dujols, it won the Arab World Institute’s Prix de la Littérature Arabe, in 2015.

When asked if he ever writes in English, Alwan quickly demurs, saying that his conversational English should indicate that writing in English wouldn’t go well. You can get a sense for his literary voice in an excerpt from The Beaver at his site, a passage translated in a workshop led by Paul Starkey. From that excerpt:

“The very first time I saw the beaver, I felt a connection. He must have felt the same way too, or he wouldn’t have climbed up the rocky bank and started messing around with my basket and blanket…I greeted him with a glistening date which I’d picked out for him from the plastic container I always took with me to the river. His hard claws touching my fingers gave me the feeling that beneath them lurked a history of worry and equivocation. He snatched the date from my hand the way my father grabbed greedily at the fruits of life, forgetting that they grew again every year.”

As it turns out, he says, the French translation experience was a good one. The Norwegian translation, on the contrary, didn’t go as well, he says. It was a learning experience.

“It’s not the controversy that drew me to Ibn ‘Arabi. It’s his passion for travel that drew me.”Mohammed Hasan Alwan on his novel 'A Small Death'

His next work, still in the research stages, has to do with a five-generation work set in the Middle East of the 18th and 19th centuries. I want to show how events happened” that impact modern conditions. “It’s quite ambitious,” he says with a chuckle.

Having traveled and lived in far-flung locales, as did Ibn ‘Arabi, Alwan seems to keep close an idea of his work as part of that “bridge,” he mentioned: outreach, connection, understanding.

“I always think that writing and art in general are the kind of thing that’s going to bring us together,” he says as he finishes the conversation. “How we convey ourselves to each other.”

Our announcement story about Mohammed Hasan Alwan’s award is here.