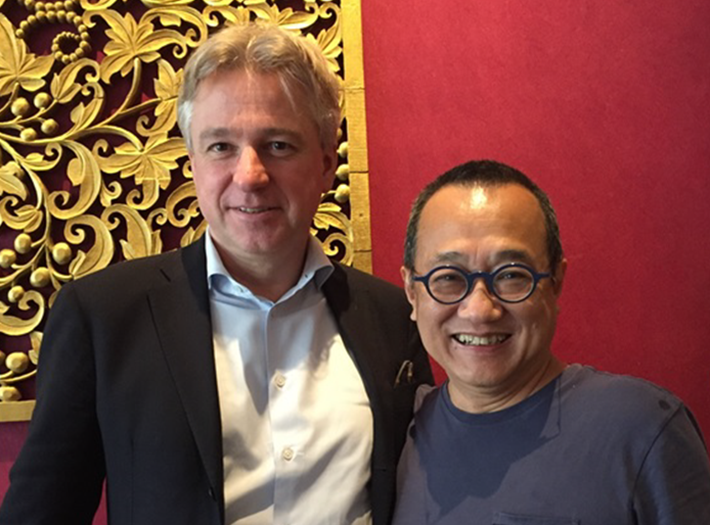 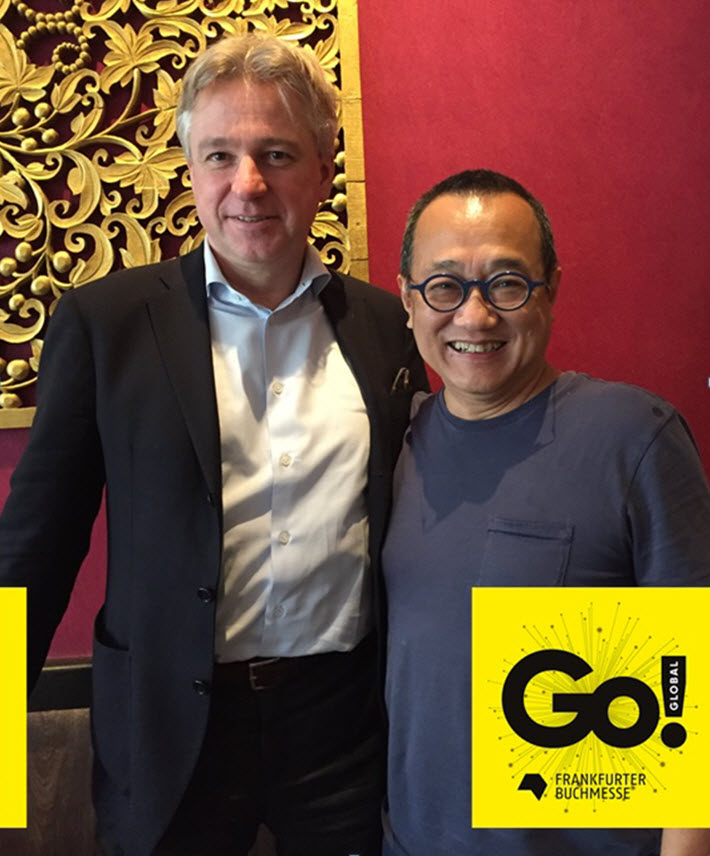 Promoting ‘a New Generation of Writers’

Among the publishing figures in Singapore, designer and publisher Edmund Wee is a standout and his Epigram Books may be the most widely known publishing company in the island nation. 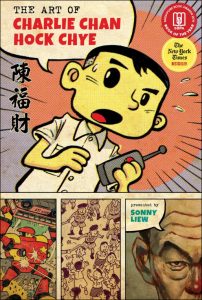 Juergen Boos: Edmund, you set up Epigram Books in 2011, as a division of the award-winning communications design firm Epigram. You publish works from young, aspiring talents, but also classic Singapore literature that’s been out of print for a while.

In an interview, you mentioned that in Singapore society, for a long while, being an author wasn’t as highly regarded professionally as say a doctor or lawyer. As a publisher, your self-proclaimed mission is to champion literature from Singapore. How do you go about that, and would you say that you’ve achieved some of your goals in the past six years?

Edmund Wee: Our goal is to publish good Singapore fiction for readers from all age groups—from the very young to adults. Initially, we are just doing this for Singaporean readers but eventually we want the world to read them, as well. Literature is one of the very few spaces left in Singapore for alternative thinking. And we want to champion that.

In the beginning, we looked for extant material—like plays, out-of-print titles, and titles in the other three official languages of Singapore: Chinese, Malay and Tamil. So we published playwrights, re-published the classics and brought out translated books.

Later, authors approached us with their manuscripts, and then we started commissioning titles in areas where we saw a gap in the market. In 2015, we launched Singapore’s richest literary prize, the Epigram Books Fiction Prize, to encourage writers to write novels instead of poetry and short stories, the more common literary forms in Singapore.

Our goal is, of course, not just to publish these stories—it’s to do them well.

Last year, we released 52 titles. This year, we expect to put out between 60 and 65. So we have a team of editors and designers in-house for this reason. In five short years, we’ve published more than 300 titles and nearly 100 first-time authors, translators, illustrators, and photographers.

The next challenge is to sell enough copies so that we can be financially stable. 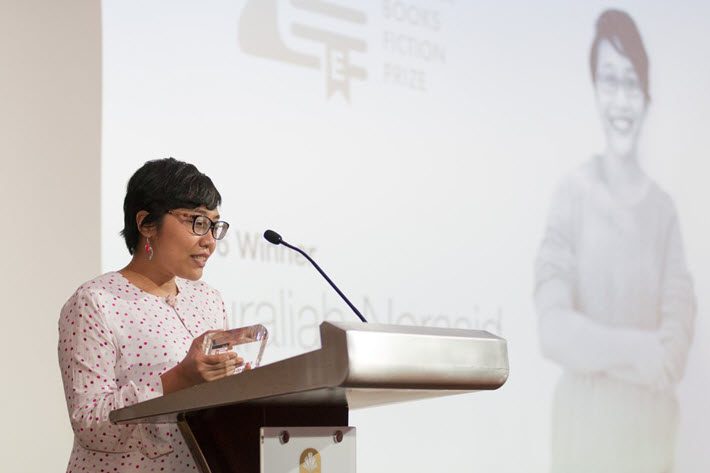 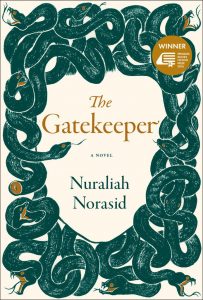 JB: Last year, Nuraliah Norsid, a research associate and first time writer, won the award for The Gatekeeper. Would you say that this prize challenges and entices a new generation of Singapore citizens to become authors?

EW: In the first year, we thought we’d be lucky if we got 10 to 20 entries. We received 69 manuscripts and eventually published seven of them—eight if we include a re-published novel from one of the finalists.

In the second year, we had fewer submissions, 52, but we expect to publish nine of them; giving us a 17-percent acceptance rate compared to the 10 percent of the first year.

I think a new generation of writers in Singapore had already started writing before this prize. The prize might have nudged some of them toward the long form and we’re pleased to have contributed in a small way toward helping writers make a living.

JB: At the award ceremony last year, you announced that you’re starting a publishing business in London, and your first UK book is coming out next month. What triggered that decision? How will your UK titles differ from the titles you publish for the local market in Singapore? 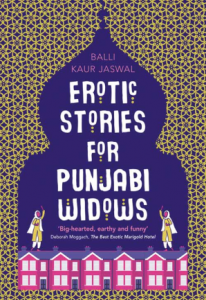 Since this novel was coming out, we felt that UK readers might be interested in her first two novels as well. So we incorporated a new company in London last November, Epigram Books Ltd. We’ll re-publish or co-publish 12 titles a year—two releases every two months—in the UK, starting with Balli Kaur Jaswal’s first novel, Inheritance, next month.

These are the same titles we’ve done or will do for the Singapore market. Apart from minor changes to the back cover blurbs for marketing purposes, the books will have the same covers and content.

JB: You’re an award-winning designer. Your company, Epigram Design, won the prestigious Red Dot Grand Prix for two consecutive years (2006 and 2007). In 2008, you were named Designer of the Year at the President’s Design Award.

The books you publish are beautifully designed and crafted. Do you find that your audience appreciates good design in books at a time when everything tends to be digital? And that they are willing to pay a higher prize for the books? 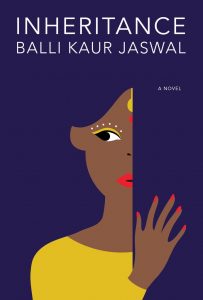 EW: I believe our readers do appreciate good design. They’ve frequently told us how good our books look. “How international,” is what some of them have said. That’s a reason why we’ve kept, so far, the same covers for our UK editions.

Whether the Singaporean readers will pay a premium for good design may be another matter altogether. The book market is price sensitive. Singapore is open and there are all kinds of books from the big overseas publishers and online sellers who can price their titles quite cheaply. So there’s a lot of pressure for Singaporean publishers to match the prices. I don’t think it has much to do with everything going digital.

JB: In five years, where do you see Epigram Books, and what are some of the goals you’re working on in the long term?

EW: Five years from now, we hope we can be financially stable. In Singapore, we publish fiction for all ages. So we hope in the long term, that the UK company can also expand beyond general fiction into the children’s and YA market as well.

And who knows, perhaps an opening will come for us to enter the bigger but more difficult US market.

Another area we’re working toward in the mid-term is to raise the profiles of Singaporean authors in non-English markets.

JB: You are a member of the executive committee of the Singapore Book Publishers Association. What are the strengths of publishing in Singapore? And what kind of challenges is the industry facing?

EW: Educational publishing has been one of the stars of the publishing industry in Singapore. These publishers have been able to export their titles, especially ones that concentrate on mathematics, all over the world.

The challenges are no different from those faced by publishers everywhere—mainly caused by digital disruption. For trade publishing, there are three main hurdles:

JB: Singapore’s publishers association has partnered with Frankfurt Book Fair to set up a new event, like a rights fair, but also with a cross-media aspect. In 2016, an initial StoryDrive Asia event was staged in Singapore, and you were a speaker. What did you think of it and where do you see cross-media business for publishers going?

EW: It was the first year for StoryDrive Asia in Singapore, and given the circumstances, I would say we had a good turnout.

Many of the participants reported having a fruitful time. But the cross-media business will take some time to grow, given the small market here. But if we look at the market as Asia, then the prospects are very positive.

JB: Last but not least, there was some noise about a book you published, The Art of Charlie Chan Hock Chye by Sonny Liew. Can you give us some background and what it means for you?

EW: We applied in late 2012 to Singapore’s National Arts Council for a grant to publish this graphic novel about comics artist Chan Hock Chye. We submitted the draft containing the copy and sketches. We got the grant of 8,000 Singapore dollars [US$5,693] which we gave to the author as part of his advance.

“If the Singapore government is looking for a breakthrough in Singapore literature, it’s ‘The Art of Charlie Chan Hock Chye‘. Alas, they think otherwise.”Edmund Wee

The novel was published in June 2015 and the council said it had violated the conditions of the grant in that the novel could “potentially undermine the authority of the government.” So the grant was withdrawn and we had to return the money. Copies of the first print run had to have a sticker pasted over the council’s logo on the imprint page.

Subsequent printings didn’t include the council’s logo. And the book has gone on to sell nearly 15,000 copies so far, where a print run of 1,000 is the norm for such literary titles in Singapore.

It has been published in the US/UK by Pantheon Books [a Penguin Random House imprint] and praised by critics in The New York Times, on National Public Radio, in Publisher’s Weekly and The Economist, amongst others. It was included as best-of-2016 titles in The Washington Post and The Economist.

If the Singapore government is looking for a breakthrough in Singapore literature, it’s The Art of Charlie Chan Hock Chye. Alas, they think otherwise.

Submissions for Singapore’s Epigram Books Fiction Prize are being accepted now, through August 31. Details and forms are here.