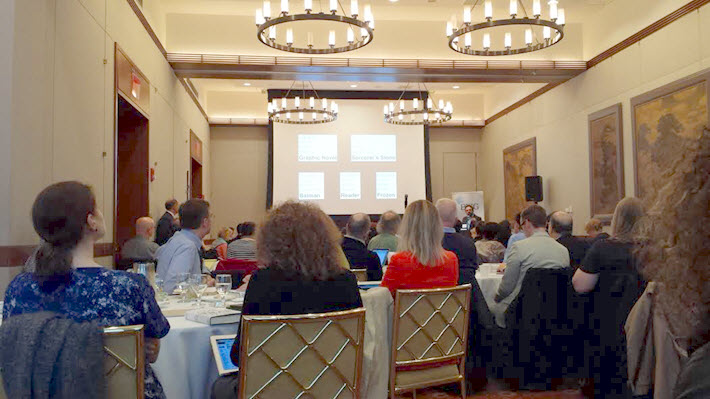 From data-charged business to a library centered on a community’s needs, BISG’s ‘Making Information Pay’ event looks at the data driving us all. 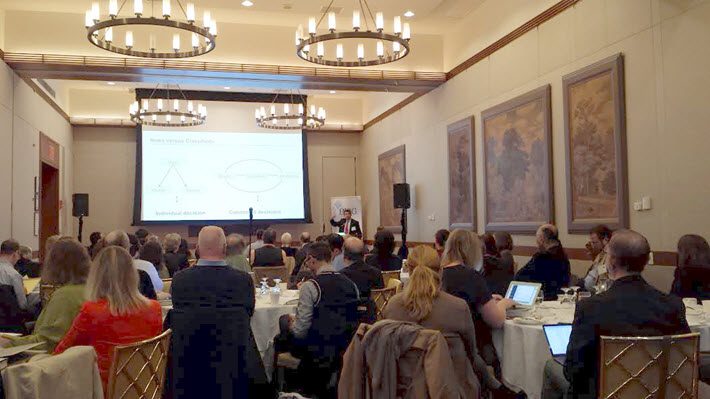 Having assumed the post of the Book Industry Study Group’s (BISG) executive director in October, Brian O’Leary has notably ramped up the service group’s activities. Daily emails arrive in inboxes about a steady round of webinars and other events and offerings.

And on Friday (April 21), the organization held a daylong conference at New York’s Harvard Club. As part of the group’s long-time “Making Information Pay” theme, the conference was specialized with a theme of “The Evolution of Delivery.”

So well attended that extra chairs had to be brought into the room, the day’s events spanned a wide swath of industry speakers, from Wattpad Studios’ Ashleigh Gardner to the Audio Publishers Association’s Michele Cobb, and from SAGE Publications’ Edward Moore to NPD Bookscan’s David Walter.

Reflecting a partnership with BISG, the market analysis firm Outsell was the first heard from, with the company’s chief analyst, Leigh Watson Healy, giving a day-opening session called “All Data, Nothing But Data.”

Uncertainty, Healy told the audience, is now the norm, surprises are to be expected—she referenced political surprises, of course, including the USA’s Trump election, the UK’s Brexit referendum, and France’s weekend first-round election. 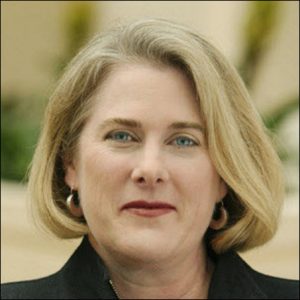 The position that Outsell is taking, she said, is that “the next UK” or user interface “is no UI.”

“A trend we’re looking at,” she said, “is the need for de-siloing data. Researchers need access to all searchable data. We have so much information that’s behind firewalls or in the dark Web. Ultimately, innovation is going to require opening up access,” as we see in the Open Access trend in academic publishing.

The difficult pivot for publishers in this, she said, is in “thinking about being in services to innovation.

“Ultimately, it’s going to come down to deciding whether to be a platform or be in a platform.”Leigh Watson Healy

“Which leads us to platforms. We see so many information organizations that are re-platforming. And ‘platform’…has to be defined around workflow, context, getting tasks done without requiring people to log in, log out…

“Ultimately, it’s going to come down to deciding whether to be a platform or be in a platform,” Healy said.

“All of this leads us to talent,” she said, at a time when many jobs are reportedly lost in the tech transition and yet many companies can find the skill labor it needs to work with data.

When thinking of “how to create a data-driven business,” she said, “harvesting what we know about consumers and creating a more customer-focused data” apparatus to better respond to challenges.

Following Healy’s remarks,  Harvard Business School’s Bharat Anand, author of The Content Trap: A Strategist’s Guide to Digital Change (Random House, 2016) spoke about the rise of “connected markets” and how critical they become in data-based commerce. 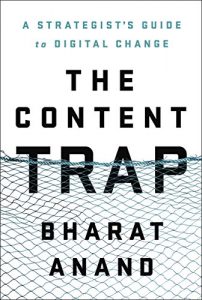 “You can actually create these kinds of communities, networks,” Anand told the audience. He used the example of the international media group Schibsted, which in 2010 capitalized on the eruption of the Icelandic volcano Eyjafjallajökull to create a new connected market. Schibsted noticed that with much of Europe’s air travel grounded, people were asking each other online, “How do I get from here to…” whatever destination they needed.

Schibsted the created a tool to facilitate these questions and answers, building on the demonstrated need created by the volcanic episode.

Publishers today, he said, “need to ask, ‘How can we help readers help each other?'” in order to begin thinking in terms of creating potentially lucrative and viable connected markets.

“Why do we get it wrong?” Anand asked. “Because we think in terms of product, not customer.” 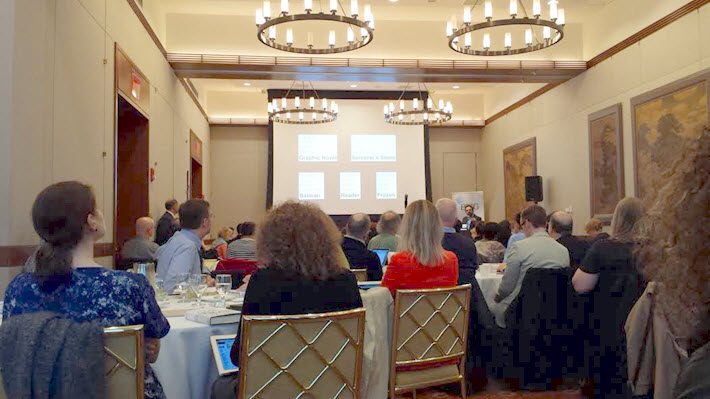 ‘Nobody Goes to Libraries Anymore’

And consumer-centric programming is what has driven Ann Arbor Public Library’s reinvention of itself as a community resource, as the library’s Eli Neiburger described it in a presentation called “The Missing Link: Connecting the Analog Past to the Digital Future at the Public Library.”

One of the things the Ann Arbor team has done, for example, is look at what services the community has lost in its local news media: arts criticism there, as in so many places, has all but dried up completely as local newspapers find it harder and harder to staff their newsrooms.

“The entire idea of a Web server is that you can distribute something to someone, yet still have it.”Eli Nieburger

Ann Arbor Public Library, Nieburger said, has responded by hiring a professional critic to provide the arts coverage that the newspaper no longer can field.

On a broader scale, the library has worked out a deal with the local paper to archive its many years of work with the provision that it can digitize and distribute any of the material requested by patrons.

“The entire idea of a Web server,” Neiburger said, “is that you can distribute something to someone, yet still have it.” The library’s arrangement doesn’t give it ownership of the newspaper’s content, but digitization and distribution rights.

This, he said, and many other services built in response to patron request—including a BISAC-based shelving system that’s friendlier to patrons than to librarians—has led to a rejuvenation of the library’s place and purpose in the community.

A few in the room appreciated Neiburger’s Berra-esque line: “Nobody goes to libraries anymore. They’re too crowded.”