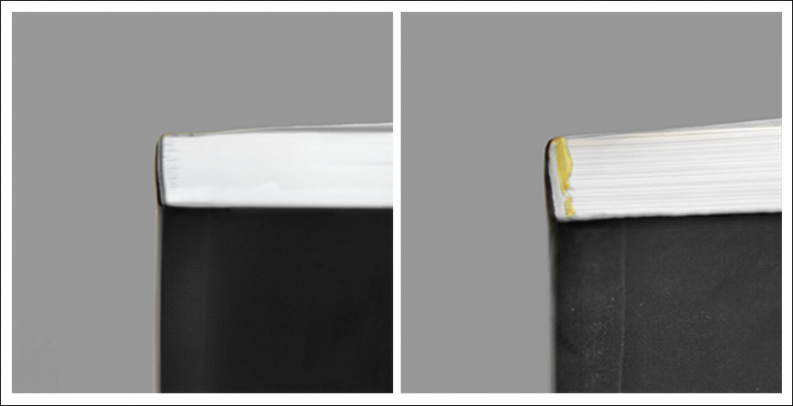 In an effort to combat counterfeit print textbooks, distributors partner with publishers on a protocol of inspection and alerts. 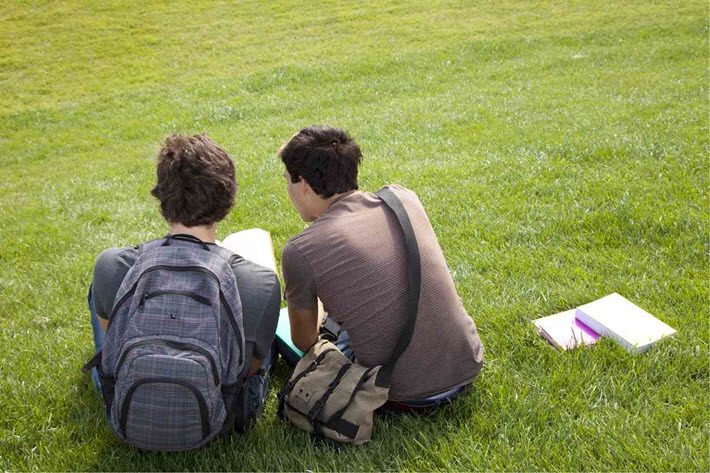 The site for the campaign encourages distributors to spot and stop the entry of counterfeit textbooks into the marketplace.

Publishers Cengage, McGraw-Hill Education, and Pearson have partnered with distributors Ingram and Chegg on distributor-facing list of “Anti-Counterfeit Best Practices”—this, in response to what publishers describe as a growing problem of counterfeit print textbooks.

Led by the slogan, “Counterfeit Textbooks Are Never Right,” the initiative has a website, which includes a quiz for distributors’ personnel to use in learning ways to spot counterfeit print textbooks.

Telltale signs might include a case-bound book’s “headband,” for example, if it appears frayed or the wrong color. Or the way that endsheets are bound to the cover can be another tip-off. Other things to watch for include color and alignment, trim size and bulk. 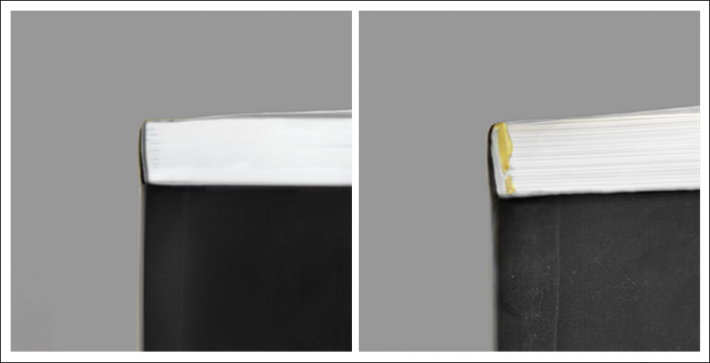 This illustration from an online quiz at StopCounterfeitBooks.com about counterfeit textbooks illustrates how inspecting the glue used in binding a book can be a tip-off to a volume that’s not legitimate.

“The education world has been plagued by an increase in counterfeit books in recent years,” according to a press statement released by Cengage, “resulting in poorer quality materials for students and reduced incentives for publishers to invest in new programs and instructional materials.”

The best-practices protocols outline a regimen that participating parties commit to. The stipulations have distributors inspect inventory that has a higher risk of being counterfeit and prevent it from infecting their inventory.

And when a distributor finds counterfeit books, there is agreement to share information about the materials and the supplier with the publishers so they can focus their enforcement efforts on those culprits.

Publishers: ‘We Will Not Rest’

In a prepared statement, Cengage’s CEO, Michael Hansen, is quoted, saying, “We are committed to fight piracy in all forms. Pirates enrich themselves at the expense of students, authors, our employees and shareholders.

“We will not rest until the market has been cleansed of all illegal materials.” 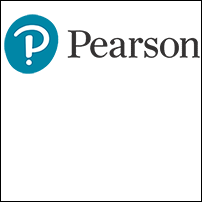 “We will continue to advocate for the integrity of high-quality courseware and are pleased to be working with distributors who share that commitment.

“We encourage others in the industry to join us in tackling this challenge.” 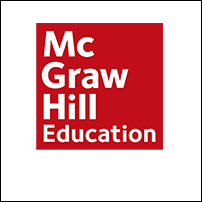 And David Levin speaks for McGraw-Hill, starting by praising the two distributors who have become the first to commit to observe the tenets of the best-practices guidance.

Levin is quoted saying, “McGraw-Hill is pleased to see Chegg and Ingram take this step, which reduces the serious threat posed by counterfeits to authors and benefits students and educators by incentivizing the development of new educational materials.

The program addresses distributors, and Ingram and Chegg reportedly are among the first to work with publishers on the problem.

“We will continue to work hand-in-hand with publishers to address the problem of counterfeit textbooks and encourage the rest of the industry to join us in making the marketplace a reliable one for students.”

And speaking for Chegg, CEO Dan Rosenweig is quoted, saying, “Because Chegg puts students first, our driving interest is in ensuring students get the genuine textbooks that they need, ordered and paid for.

“We share this goal with our partners and together we are working to put a stop to counterfeiting.”

The program has as one of its goals getting other publishers and distributors to sign on, eventually creating a unified front and barrier to counterfeit textbooks.

The statement issued by Cengage to Publishing Perspectives on behalf of the other publishers and distributors working together on the initiative now makes it seem that a corner has been turned in terms of this publishing sector’s willingness to work together.

“Publishers will pursue their legal rights,” the statement reads, “against anyone who is involved or who facilitates the distribution and sale of counterfeit textbooks, as well as those who engage in digital piracy.”