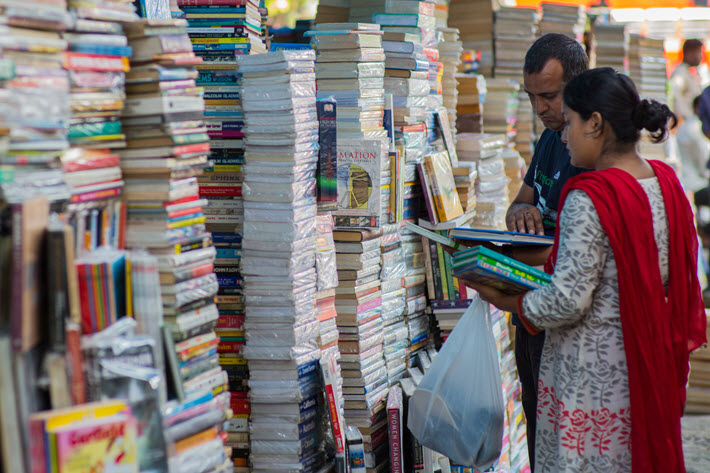 As in many other parts of the international marketplace, India’s longstanding book retail districts like Delhi’s Nai Sarak face growing competition from online retail. 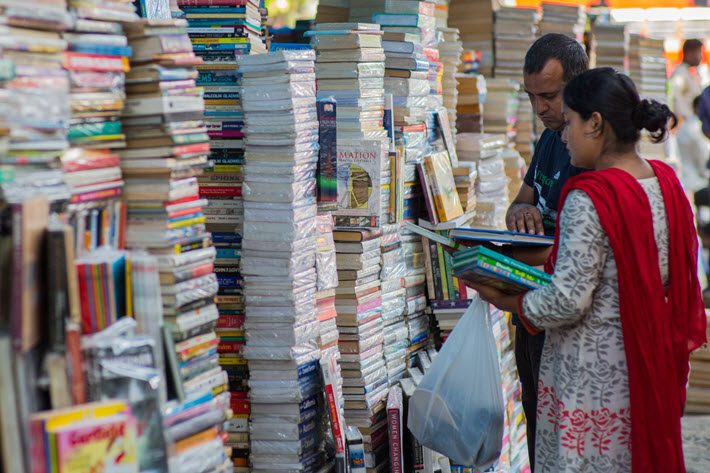 Book markets in India—this one is in Mumbai—are pressured today by many factors, starting with the competition of online sales. Image – iStockphoto: Jedraszak

He speaks with shop owner Parmod Verma, whose latest customer is from Afghanistan and has requested a book on accounting.

“People come to my shop from all across the country and abroad,” Verma says. “My family has been in the business for the past 80 years, but now I want to exit it. The growing congestion in this area and easy availability of books online have killed our business.”

This is Delhi’s oldest bookselling and publishing district, and it’s facing a wide array of challenges, Sharma reports.

The area’s shop owners have been there for decades, buying and selling old textbooks. The key complaint, of course, is online sales, which include second-hand books. They also cite a “rise in book piracy, a flourishing photocopy culture, and an increase in [the] number of foreign publishers setting up shop in India,” writes Sharma. The upshot of all that is that books are being sold more cheaply elsewhere.

The area became a center for bookselling shortly after Partition in 1947, when many publishers and booksellers from Lahore made it their home. But starting in the 1970s, many moved their offices to Daryaganj, which would became India’s biggest center for publishing by the 1990s. Now, even assurances that students can sell their used textbooks back for 50 percent of cost seem to be falling flat.

Osbeer Singh, who runs one of the longest running bookshops in the market, Public Book Depot, tells Sharma that the business was started by his father in 1948 after their family left Lahore for India. “We’ve been in the business since the 1920s,” he says, “but have never seen such bad times…“I think [students] are getting better deals online.”

On the other hand, Satish Gupta, who with his brother runs the Agarwal Book Center, tells Sharma that his business is down by 60 percent, and that it’s the fault of publishers: “They’ve been increasing the prices of textbooks, promoting piracy. People try to buy pirated books instead of coming here. The government should fix rates for textbooks,” he says, adding that he’s trying to “reinvent his business” by launching a Web site to make online sales.

“It’s an experiment to survive,” he says, “but I know I cannot compete with the likes of Amazon.”

Manoj Sharma’s full report at the Hindustan Times is here.