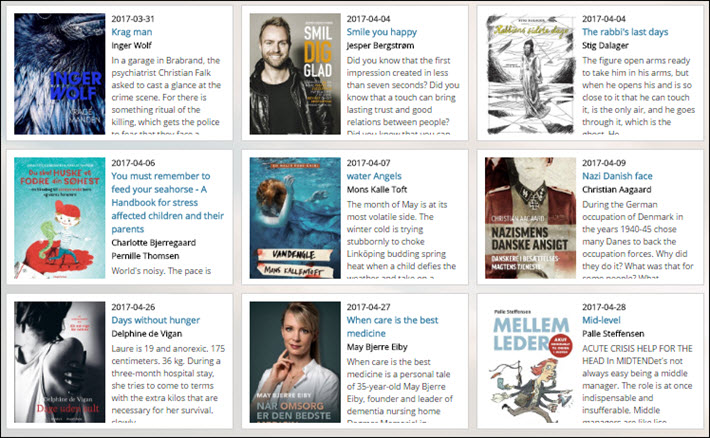 ‘Our digital services can easily be used as a platform for testing’ books, Morten Strunge tells Publishing Perspectives, on acquiring a new publisher. 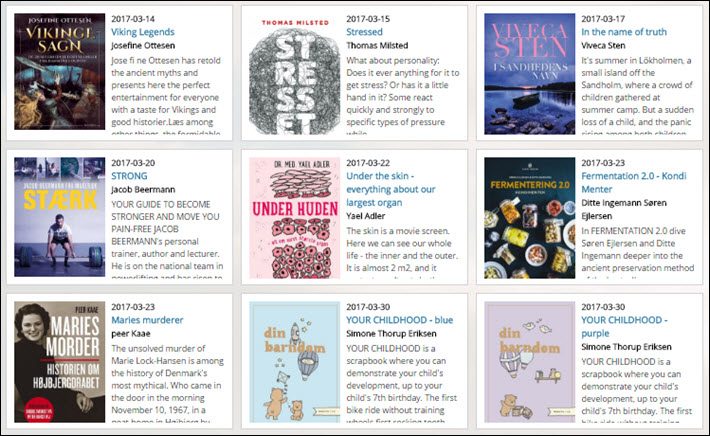 Titles listed as upcoming from Denmark’s People’s Press, now a part of Storytel

With this move, Storytel takes another step in the expansionist journey that has already seen its first incursion into Denmark with the acquisition of its former subscription competitor Mofibo last May, followed by its buy of the important Swedish publisher Norstedts in June.

People’s Press has 35 employees, all of whom will continue to hold their positions, according to press materials. The company produces around 100 books annually has has a backlist of more than 1,200 titles. Prior to Storytel’s buy, People’s Press has been part of People Group which includes media agencies and a national radio station in its portfolio.

As it happens, Storytel’s Mofibo now is to move its offices into the same building in Copenhagen with People’s Press. Fourth-quarter earnings report for Storytel’s own content (from publishers Norstedts and Massolit, as well as Storytel Original) accounted for more than 40 percent of books read or listened to on Storytel that quarter.

Publishing Perspectives has spoken with Storytel CCO Morten Strunge (who entered the company via Mofibo) about the People’s Press purchase and about its strategy in running both publishing houses and subscription services. 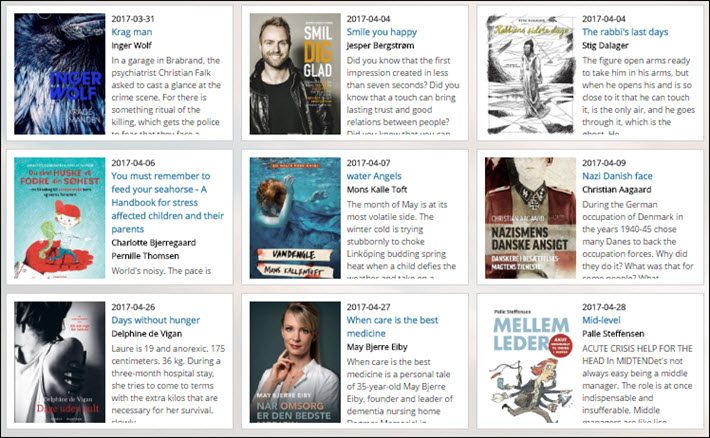 More titles listed as upcoming from Denmark’s People’sPress, now a part of Storytel

Publishing Perspectives: Compared to that 40 percent of Storytel’s Swedish action that your company produces, itself, what are your expectations for the performance of content from People’s Press in the Danish market? 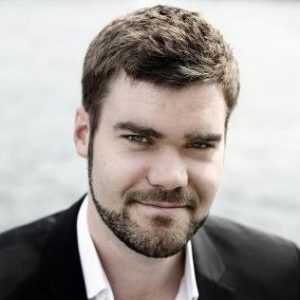 Morten Strunge: We’ll do what we can to expand the share of their titles, and we expect to succeed in doing that.

First, we’ll produce a lot more new titles as audiobooks as well, and we’ll publish them alongside the printed books.

We’re also looking at People’s Press’ backlist to identify relevant titles that can be sent out in audio format.

On top of that, we’re considering ways to establish a means of cooperating strategically.

PP: Which qualities of People’s Press look to you like the most valuable assets to Storytel?

MS: First and foremost, this is a very fine match of mindsets. We have, in many ways, the same mentality. Of course, their catalog of quality books and fiction also matches our target users well.

But when you buy a company, you also buy talent. We feel that we can sit down to shape the future with these people.

PP: With Storytel now owning publishing houses in both Sweden and Denmark, what are your thoughts about them joining forces and sharing knowledge?

“We see great potential in buying foreign rights together. By guaranteeing a bigger market, I expect that we can also negotiate better prices.”Morten Strunge

MS: One hope is that we can help authors reach new audiences more easily. We also see great potential in buying foreign rights together. By guaranteeing a bigger market, I expect that we can also negotiate better prices.

Furthermore, there must be a lot of experience and best practices to share between publishers that operate in different markets and thus don’t compete with each other.

I’m convinced that Norstedts does something better than everyone else does, and there will be some other field where People’s Press excels. Sharing this knowledge can prove to be highly valuable to both.

PP: Just like turning up the volume in People’s Press’ audio book production, could you imagining turning successful Storytel Originals into print titles to build on the digital-first approach?

MS: That’s definitely possible. Moreover, Our digital services can easily be used as a platform for testing material that the publishers are considering but not sure about. How well will a book catch on? Are we imagining the right target readers? I think we have a an exciting tool at our hands.

PP: How, if at all, will it affect the editorial profile of the Danish and Swedish publishers, that they’re now part of a group whose main business is book subscription services?

“Bringing everybody into the same family certainly lets us add a range of valuable opportunities on the top.”Morten Strunge

MS: I think we can encourage readers to read more books from our publishing houses.

We’re in a position to be smarter in our thinking around the books: We can follow a book from author to reader and thus gather a lot of information on the course of that journey. There could be new knowledge at each step along the way.

Whether this opportunity will result in changes in profile or acquisition policy will be up to the publishers themselves. They’re autonomously driven companies–very well driven, I should add and should remain as such.

Bringing everybody into the same family certainly lets us add a range of valuable opportunities on the top, and we look forward to developing this.