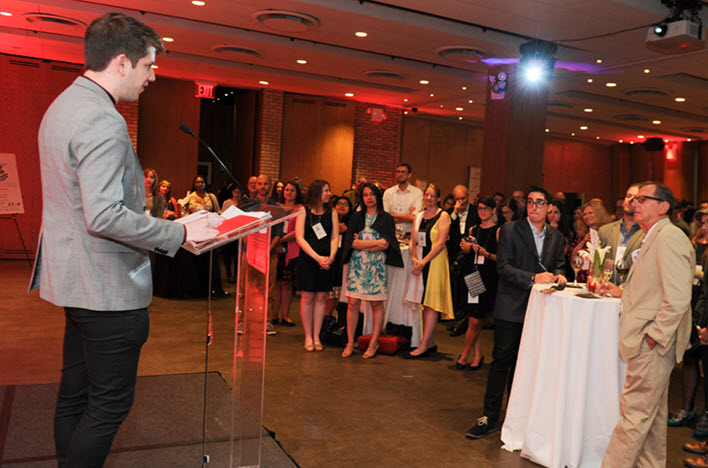 With an emphasis on internationalism, the PW Star Watch program provides its annual Superstar with a trip to Frankfurt Book Fair and a network of contacts in the world publishing industry.

In association with Frankfurt Book Fair, the Publishers Weekly Star Watch program has opened today (March 31) for nominations. The page on which to get more information about the program and to make nominations—of yourself or colleagues—is here. Nominations close on June 15.

“We all know on some level that publishing is a global business, but the reality and the scope of that hadn’t sunk in for me until I saw the whole world gathered inside the Frankfurt fairgrounds.”Andrew Harwell

The new round of PW Star Watch is expected to name 40 publishing professionals who’ll be featured in an editorial focus at Publishers Weekly, September 4. A panel of representatives of Publishers Weekly, Frankfurt Book Fair, and industry leaders choose the initial group of 40 and then a group of five finalists.

A “Superstar” chosen from the finalists will then be honored at an event in New York City. The Superstar will travel to Frankfurt Book Fair (October 11-15), all expenses paid.

In a news release, the program describes the criteria and intent this way: “Nominees can be from any area of the industry—publicity to production, bookselling to new technology—anyone who is making an impact on the publishing industry and is not yet in an executive role.  The goal of PW Star Watch is to shine a light on innovative members of the industry and provide them with additional mentorship, while also honoring their contributions.”

As covered by Publishing Perspectives, the 2016 Superstar was Andrew Harwell, a HarperCollins Children’s Books senior editor in middle-grade and YA fiction who appeared on two panels at Frankfurt while attending.

In a prepared statement, Harwell is quoted, saying, “We all know on some level that publishing is a global business, but the reality and the scope of that hadn’t sunk in for me until I saw the whole world gathered inside the Frankfurt fairgrounds.

“I’m deeply grateful to the Star Watch program for allowing me to contextualize my role as an acquiring editor within my role as a global citizen—that’s a gift I will cherish for a very long time.”

In announcing the opening of 2017 nominations, Publishers Weekly’s editorial director, Jim Milliot said, “Publishes Weekly is pleased to be working with Frankfurt Buchmesse in order to bring international recognition to emerging leaders and innovators in publishing. We look forward to welcoming new ‘stars’ of the industry for the third annual PW Star Watch.”