Having seen a bid for fixed book prices stall out before, the Polish publishers’ association is making its case again to legislators in hopes of improving the industry’s prospects.

Publishers and Booksellers, Looking for Relief

The Polish Books Chamber, Polska Izba Książki (PIK), has called on the country’s authorities to introduce a lower VAT rate on books, based on a similar measure used in Italy.

According to the industry association, the move would promote book readership in Poland by enabling local taxpayers to deduct their spending on books from the personal income tax.

Włodzimierz Albin, president of the PIK, says that the measure is at a “very early development phase” and under examination.

Albin, who is with Wolters Kluwer in Poland, is familiar to many Publishing Perspectives readers, having been part of the “Books From Poland” programs at both BookExpo America last year in Chicago (when Warsaw decided to ditch a fixed-price proposal) and at last week’s London Book Fair. In London, he spoke with publisher Sonia Draga, who was a key speaker in Frankfurt Book Fair’s The Markets conference in October. (The Markets this year is on October 10 at Frankfurt Book Fair’s Business Club.)

Albin says that a similar fiscal measure for Internet access was introduced in Poland several years ago, allowing taxpayers to deduct up to 760 zloty (US$192) per year for the costs of online access. But under current law, only local entrepreneurs can deduct their spending on trade books from their taxes.

The Polish ministry of culture now is considering the chamber’s initiative. Supporters of the idea say the measure wouldn’t be particularly burdensome on the state budget, as it would be partly compensated by an increase in revenues from the value-added tax (VAT). Print books are subject to a 5-percent VAT in Poland.

Fixed book prices “aren’t a novelty in Europe, as the majority of major European countries have implemented such rules that apply to books.”Włodzimierz Albin

For the PIK, the VAT reduction measure is part of a larger legislative package for which the association has lobbied.

It complements the organization’s long-standing proposal to introduce a fixed book price to combat the continuing decline of book sales in the Polish market. The country’s publishing industry, according to a report from the association this month, “is the only sector in which new products are typically sold with a 30-percent discount.”

What’s more, the report indicates that since the 1990s, the number of bookstores in Poland has declined from some 3,000 to only about 1,800.

Thus, the industry association claims that the fixed-price measure would lead to a stabilization of book prices, which would benefit small publishers and bookstores.

The PIK has drafted a bill which aims to introduce fixed prices for new book releases, and those fixed prices would then stay in force for 12 months after publication. The bill provides for an exemption for ebooks, which currently are subject to a higher VAT rate of 23 percent.

Article 4.2 of the draft bill states,  “The publisher and the importer are required to include the fixed books price and the information on the month and the year of the book’s introduction to the market in a permanent way on the book and in the publisher’s Internet catalog.”

Drafted With Support from the Börsenverein

“The draft bill on the fixed book price,”Albin says to Publishing Perspectives, “is not related to fiscal issues, but it introduces some changes to the rules that apply to the publishing market.

“It isn’t a novelty in Europe, as the majority of major European countries have implemented such rules that apply to books. And these countries represent more than 60 percent of the European Union’s population.

Referring to last year’s loss of the provision, he says, “In the previous term of the Polish parliament, the draft bill went through almost the entire legislative procedure, but it got stuck in the end of the term. As a result, it was not passed by the lawmakers.”

According to data from the PIK, the EU member states that have introduced such measures include France, Germany, Austria, Spain, Portugal, Italy, Greece and Croatia. Similar laws were passed in Norway and Switzerland, as well as in Japan, South Korea, Mexico and Argentina. In fact, the PIK says that fixed-price legislation for books is currently being developed in Canada and Brazil.

In Canada, this is not the case. A representative of the Association of Canadian Publishers says that while fixed book pricing was considered several years ago in Quebec, the regulation was not put into place and isn’t being considered at the moment in Canada.

The bill put forward in Warsaw, PIK officials say, was drafted with the support of experts at Germany’s Publishers and Booksellers Association, the Börsenverein des Deutschen Buchhandels.

Albin says that despite the obstacles encountered in parliament, work on the PIK’s proposal was resumed by the Polish ministry of culture after the draft bill was presented to culture minister Piotr Gliński.

Gliński “got familiar with our arguments,” Albin says, in the first effort, “and with the arguments of the bill’s opponents. He decided that the draft was worth undergoing further work.”

Established in September 1990, the PIK is headquartered in Warsaw. Currently, the chamber has about 240 members active in the Polish publishing industry. 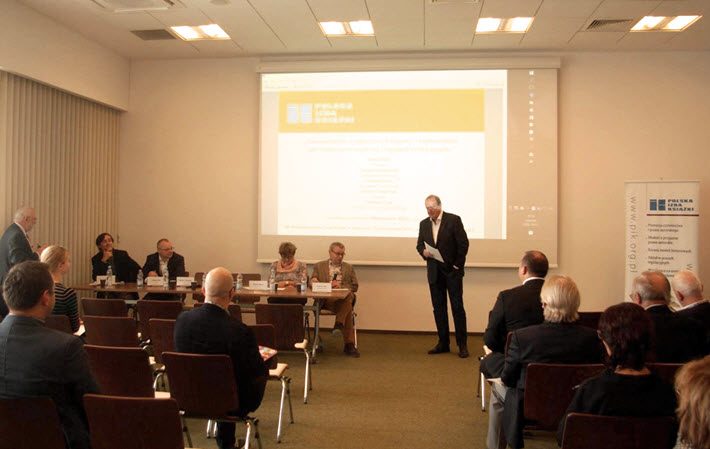 A meeting of the Polish Books Chamber, which has a legislative agenda in play in Warsaw. Image: PIK

Our thanks to Roger Tagholm for assistance on this story.