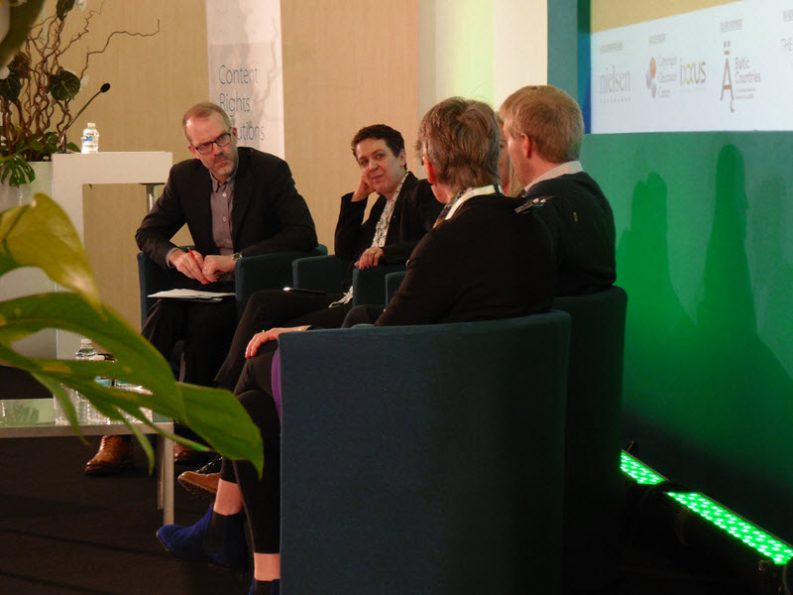 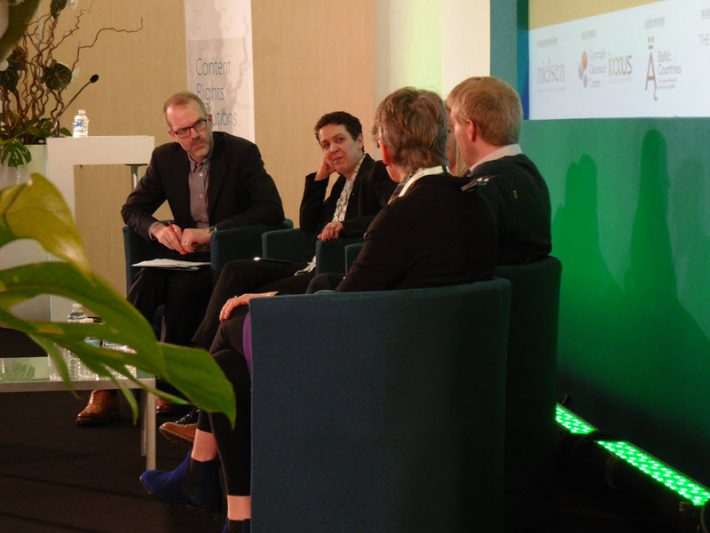 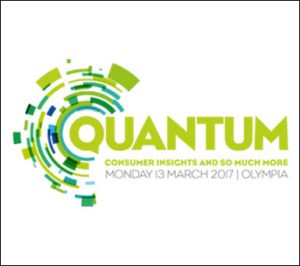 Publishers in the United Kingdom were given the kind of news on Monday (March 13) that can put a spring into their step as London Book Fair opens today: In 2016, British consumers bought more books in all formats—print, digital and audio—than in 2015. And they spent more money on them too.

The news came from Steve Bohme, who directs UK research at Nielsen Book. In its new partnership with the book fair’s Quantum Conference, Nielsen’s data and publishing’s digital developments lie in logical proximity to each other.

Some 360 million units were sold, Bohme reported, in 2016—up from 353 million in 2015, with value standing at £2.4 billion, up from £2.24 billion the previous year. Bohme’s material was drawn from the annual Nielsen Books & Consumers survey, which in the past fed the BookInsights conference.

“The book industry will be buoyed by these strong results and overall growth,” Bohme said.

“This year we’ve seen a range of bestsellers from a diverse selection of genres come to the fore—from Harry Potter and the Cursed Child to Ladybird Books for adults and Enid Blyton parodies and social media sensation Joe Wicks’ healthy cookbooks.

“And these key titles and series have contributed heavily toward this upward trajectory.

“It’s refreshing to see how books generally, and print books in particular, are still appealing to younger consumers, both male and female, despite so many other forms of entertainment and information competing for their attention.”

Bohme is known for giving his surveys a theme, and this year he took his inspiration from the late David Bowie, to allow his slides to chart the “ch-ch-ch-ch-changes” in the last year.

Indeed, probably one of Bohme’s most interesting presentation slides was titled just that and showed genres and categories in which Nielsen could detect UK “ebook share rising,” “print share rising,” and “audio share rising.” 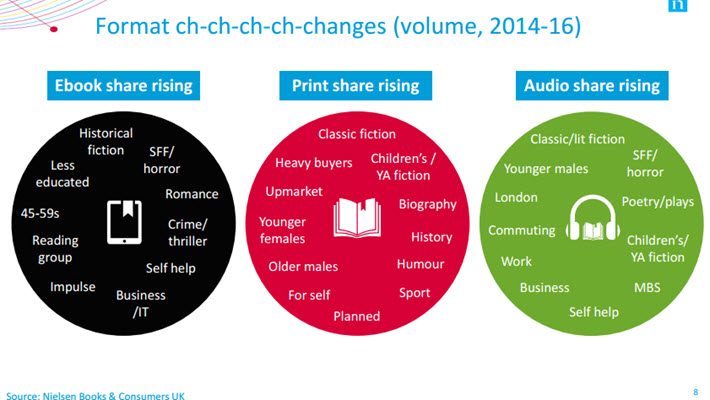 The survey work also confirmed the viability of print so widely discussed. In the UK, print books were up 4 percent in 2016, with ebooks down by the same amount. 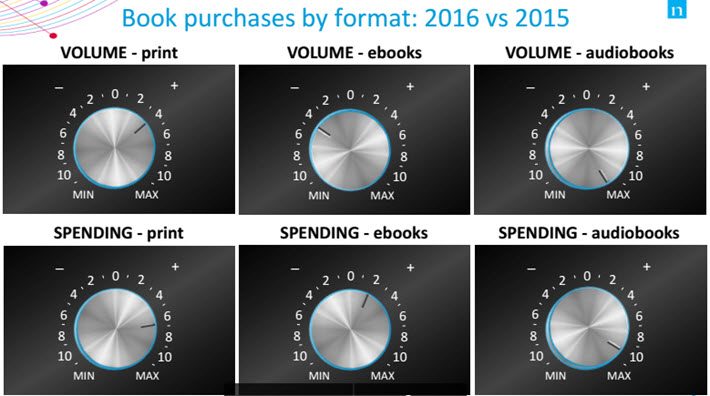 Bohme noted a widely observed decline in the popularity of e-readers and the rise of multi-function devices for reading ebooks.

Among other takeaways were a flattening of the sales of self-published ebooks because, said Bohme, “ebook prices increased faster than print.” Nonfiction and children’s print fueled growth in 2016,at 5 percent and 3 percent respectively.

The ebook drop meant the high street grew ahead of online, “although e-tailers still gained share in print” modestly, by 1 percent. 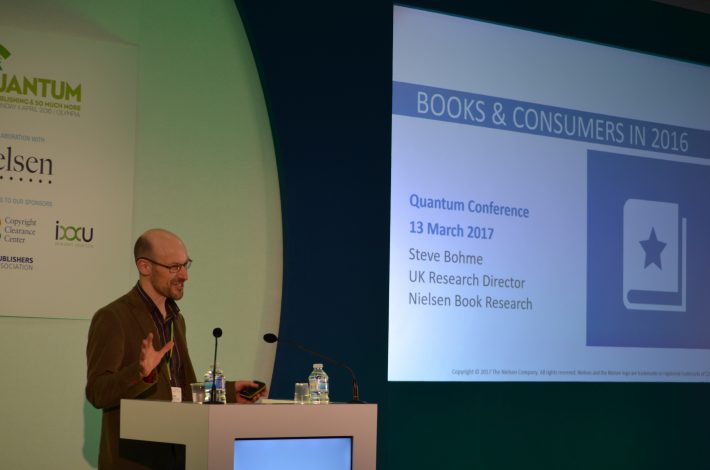 Nielsen has drilled down into why consumers make book purchases and had some interesting figures on the estimated 188 million reportedly unplanned purchases of 2016.

By far the main reason to buy—cited by some 31 percent of respondents—was simply browsing in physical book stores, as opposed to a 19-percent figure for browsing online.  That figure will be further good news for Waterstones managing director James Daunt, already on a high from recent positive figures, and will be welcomed by independent booksellers, too.

But the good news was tempered by warnings.

The number of people who told Nielsen that they read a book “daily” declined by 3 percent in the UK, per Nielsen’s findings. And there were corresponding increases between 3 and 5 percent, depending on the age group, for daily use of social media or video sites. 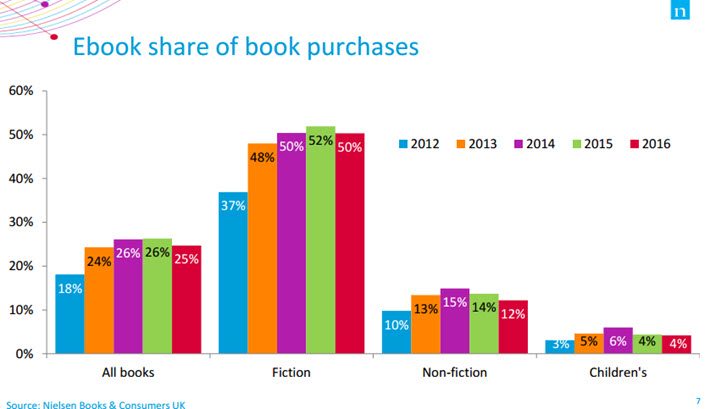 Bohme was followed by a panel exploring how to leverage data for “insightful publishing,” a discussion led by Nielsen’s Jo Henry.

This introduced delegates to at least one new word: “shop-along.” This is something with which Penguin Random House has been experimenting, explained the publisher’s consumer insights chief Louise Vinter. 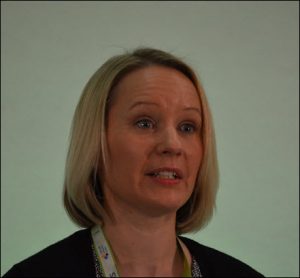 “Our staff actually go shopping with consumers,” Vinter said, “to try to step into their shoes.  We pick people who might not ordinarily go into bookshops because they find them intimidating and we always try to finish in a bookshop.  It’s interesting that non-book retail is growing—i.e. stores selling books that are not bookshops, which might appeal to those people who find bookshops intimidating.”

Vinter said that in other areas, a simpler, less clever approach to marketing often worked.

“We were developing a gifting recommendation tool and we developed something that we thought was very good.  That was the one our research panel of consumers hated.  They preferred the much simpler one.”

Lauren Romeo, scientific director with natural language processing (NLP) Tekstum—a Barcelona-based company that “identifies, measures and analyses the feelings of readers”—spoke about the “lexicology that is distinct to the publishing industry.”

She referred to mining social media data for those emotional words that can influence metadata and thus help book discovery and sales. “Discoverability is an ever-growing challenge,” Romeo said, “but rethinking metadata and using key words from social media can help.”

Conferences are always good for hearing about those ideas being explored in other industries that just might be applicable to the book industry.

Essentially, it knows when you’ve finished your drink, and sends a signal to the bar-staff who can then appear at your table with a refill.  Whether something similar can be inserted in series fiction when you near the end of the title you’re reading remains to be seen. 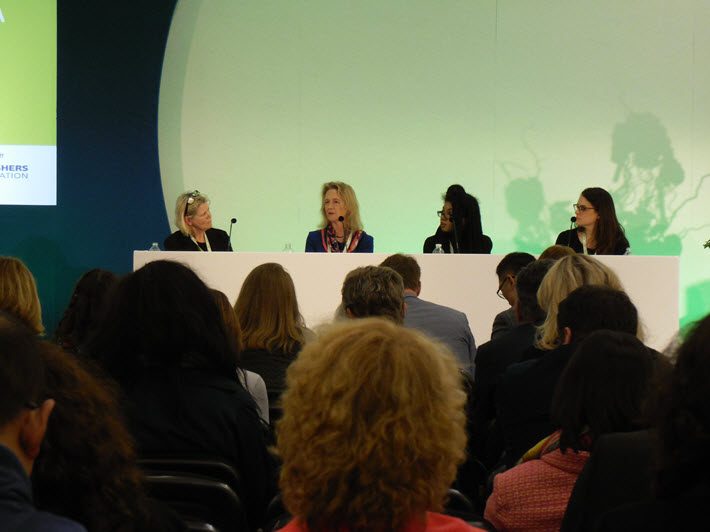 ‘Never Been a Generation More Literate’

“While we’re in a transition of digital” publishing, “we’re also in one about purchasing online.”Dominique Raccah

And if anything, the gulf that persists between some of the most successful companies in reading and writing was most evident in a panel on YA and fandom in the afternoon. Here, the contextual chasm between the Wattpad platform and traditional publishing was evident, the former being a place of reading and writing by users.

If much of what Wattpad writers and readers enjoy most starts as fan fiction, said Wattpad’s Ashleigh Gardner, “Almost everybody started out writing fan fiction” at one time or another—”It was just in their diaries.” And while diversity is keenly important to Wattpad readers, she said, they prefer stories with diverse characters, not about diversity, per se.

“There’s never been a generation more literate,” Gardner said, a comment that seemed to take some attendees by surprise. She speaks, of course, from a platform with some 45 million active users monthly, where writers are monetized by the loyalty of their readers, something that traditional publishers are still exploring. The new Wattpad Tap chat-story app is the latest new addition to a suite of features for primarily mobile readers. 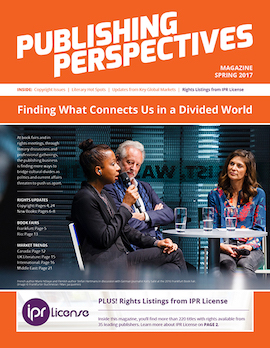 Raccah, whose company has just been named among the 10 major publishers in the States, made a careful distinction for the audience: “While we’re in a transition of digital” publishing, she said, “we’re also in one about purchasing online.” Without having named the biggest retailer in books, Amazon, Raccah had flagged one of publishing’s most persistent struggles, its fast-evolving pathways to sales.

And Newton, whose levity was a bright spot as the day waned, didn’t miss a beat when Thomas asked if he’d been able to see the digital disruption coming to publishing: “Yes, of course,” he said to loud laughter, “I saw it in its entirety, and we adapted our company accordingly.”

More seriously, Newton revealed that Bloomsbury in 2005 had considered manufacturing e-readers which had two screens working like facing pages of a book. Fortunately for the company, the plan was abandoned—two years later, Amazon would introduce its market-leading Kindle ecosystem and devices.

Adding that the “low barrier of entry” in publishing continues to make it a fine career choice, Newton was quickly back to his wry wink, as well: “My notes here say to be optimistic.”