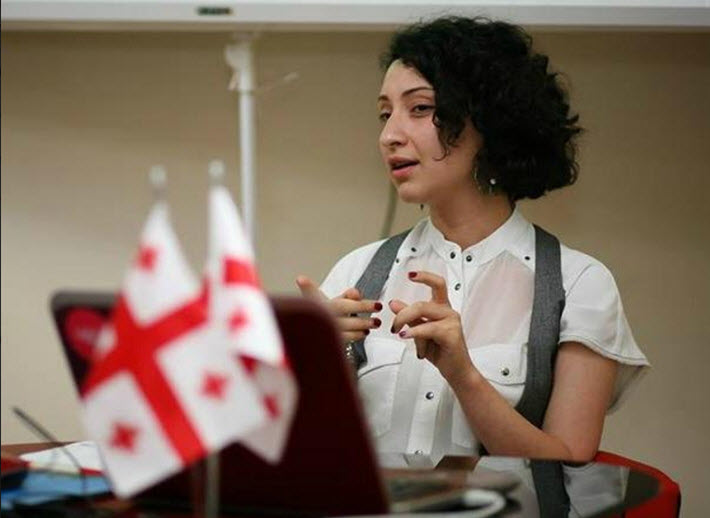 Tbilisi’s textbook industry is in crisis because of what the International Publishers Association calls Georgia’s ‘self-defeating’ government policy. Some publishers already are out of business. 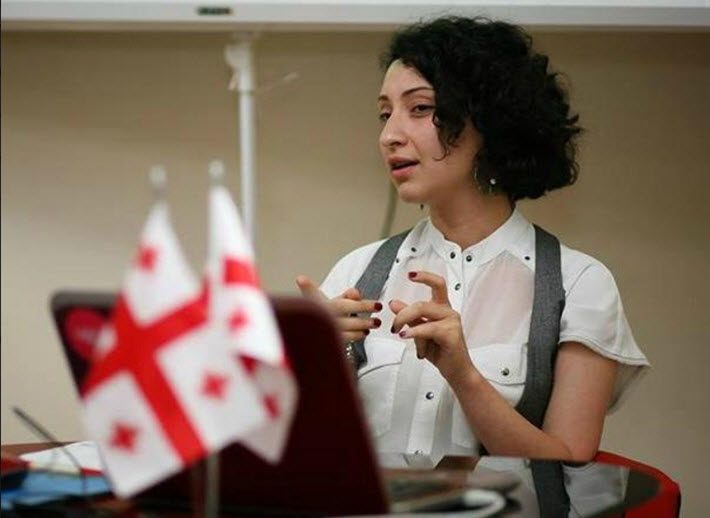 Gvantsa Jobava, who chairs the Georgian Publishers and Booksellers Association, says her company, Intelekti Publishing, has lost 70 percent of its revenue under the government’s program of state-produced schoolbooks. Image: Provided by Intelekti Publishing

The International Publishers Association (IPA) secretary general José Borghino will lead a delegation next week to Tbilisi, where Georgian publishers are struggling to survive the effects of a government program in the textbook market.

Borghino is to be accompanied by IPA’s Ben Steward, who directs IPA’s Freedom to Publish program, and by members of the organization’s Educational Publishers Forum (EPF), to participate in a conference in the Georgian capital—and, IPA officials tell Publishing Perspectives—in hopes of meeting with officials of Georgia’s ministry of education about the crisis in the country’s textbook industry.

Georgia is scheduled to be Frankfurt Book Fair’s Guest of Honor in 2018, and the Georgian Publishers and Booksellers Association has been a member of IPA since 2007. 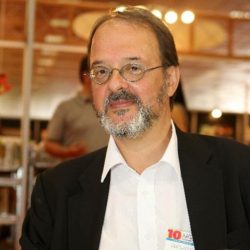 As documented in June by IPA, the ministry made a surprise decision in 2013 that textbooks should be provided free of charge to students in Georgia. Rather than pay the publishers for those textbooks, the government reportedly simply used the publishers’ files to have the books printed. It then distributed the schoolbooks without regard for the publishers’ or authors’ copyrights.

In a statement made to Publishing Perspectives from IPA’s offices in Geneva on Wednesday (March 22), Borghino says, “This policy is self-defeating because while it seeks to distribute free books in the short term, it has set the country’s educational publishing industry on a heading to annihilation.

“At the IPA, we have seen it happen in other countries—such as Hungary and Poland—that state monopolies in textbook publishing always fail to deliver the quality resources that teachers, students and their parents deserve and expect.

“State publishing monopolies capsize successful business models, cause long-term damage to educational performances and youth literacy, and cause the avoidable losses of thousands of the jobs that are generated by pluralistic, competitive publishing markets.”

Publishing Perspectives has asked the Georgian ministry of education and science for a comment. If a response is provided, this story will be updated. 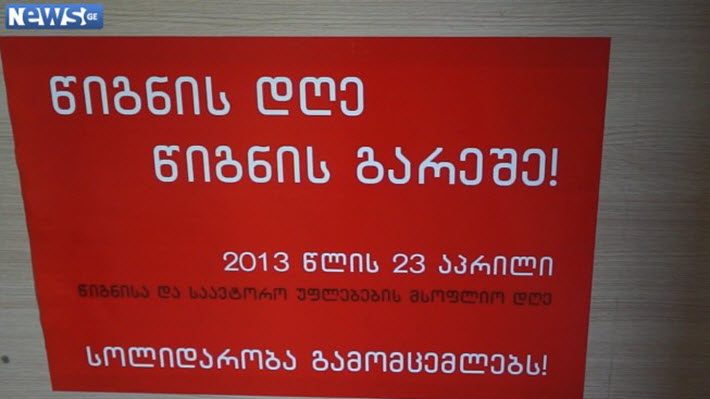 In 2013, as the government’s textbook plan was enacted, many bookshops closed in protest on the UN’s World Book and Coypright Day. This sign reads, ‘Book Day Without Books, 23 April 2013, World Book and Copyright Day, Solidarity to Publishers.’ Image: Provided by Intelekti Publishing.

‘We Don’t Know How To Pay the Salaries’

For an update on the situation, Publishing Perspectives has spoken with Gvantsa Jobava, manager of international relations at Intelekti a long-standing textbook publisher in Tbilisi, and chair of the Georgian Publishers and Booksellers Association. A former Frankfurt Book Fair Fellow (2015), Jobava spoke in October at the fair’s 2016 Business Club and is a member of the organizing committee for Georgia’s 2018 Guest of Honor program.

In Georgia, textbooks are updated and renewed every five years or so, Jobava says. And late last year, new talks with the ministry of education looked promising for the revisions to be published this year, says Jobava. The minister of education during the 2013 action, Giorgi Margvelashvili, has since become Georgia’s president, and the current education minister is Aleksandre Jejelava.

“One publisher that had maybe 35 workers before now is down to five. It’s now the smallest publishing house in Georgia.”Gvantsa Jobava

There have traditionally been some 20 educational publishers working in Georgia, Jobava says. That number may now be down to 12 or 13, she says, the others having gone out of business since the government began producing the textbooks itself in 2013.

Surviving companies like hers, she says, are in dire straits and hanging on only because a part of their business isn’t in textbooks, which is an element of the scenario the IPA delegation will observe on its trip to Tbilisi.

“We have lost 70 percent of our revenue,” Jobava says, “and we don’t know how to pay the salaries of our employees.

“One publisher that had maybe 35 workers before now is down to five. It’s now the smallest publishing house in Georgia. Other publishers are still working but maybe producing just two or three books a year.”

And what intensifies her frustration, she says, is that the publishers had reached what sounded like a workable arrangement for the government to buy this year’s new round of textbooks from publishers and distribute them free—only to learn in late January that instead, publishers would have to make two-tiered bids for the jobs of creating and printing the new textbooks:

The result is that, should this plan go forward, publishers will have to try to get contracts for creating the textbooks and yet may not be able to get the job of printing them. Jobava says that her association suspects that the government will again use a couple of large printers from which it gets good prices to do all the printing, cutting the publishers out of that part of the arrangement.

“The publishers say they have nothing to lose and are standing on their position very together and very firmly.”Gvantsa Jobava

“The government has also had a meeting with the authors,” she says, the concern there being that the ministry might strike a deal with them, going around the publishers. Where the publishers used to pay textbook authors a euro for each textbook copy sold, their royalties from the government, she reports, since 2013 have been half-a-cent for each copy distributed free of charge to students. It’s uncertain what those terms will be for authors going forward, Jobava says.

And the publishers, themselves, have never been paid by the government for the print files used in 2013 to print the textbooks, she says. In many parts of the world, this would be characterized as flagrant violation of copyright law in a country that signed onto the Bern Convention in 1995, established an ISBN agency in 1997, and joined the World Trade Organization in 2000.

“State monopolies in textbook publishing always fail to deliver the quality resources that teachers, students and their parents deserve and expect.”José Borghino

One of the most painful aspects of this long ordeal, she says, has been that many Georgian citizens have come to think of the textbook publishers as greedy business operatives, portrayed as “making a profit on the children of the country.”

“We now have very serious financial problems,” she says, and she made a presentation on this at London Book Fair as part of the IPA’s activities there. Prior to the change in relations with the government in 2013, she says, “The ministry of education and science had been developing curricula and inviting publishers to present their textbooks for assessment.

“After receiving Ministry approval, publishers could publish the textbooks and present them to teachers for evaluation and selection.” A healthy competition developed, she recalls, as publishers produced up to three versions of each approved textbook.

What’s more, she says, there was a robust tradition of authors traveling around the country to introduce the textbooks to teachers and offer training in the best use of the schoolbooks in classes. 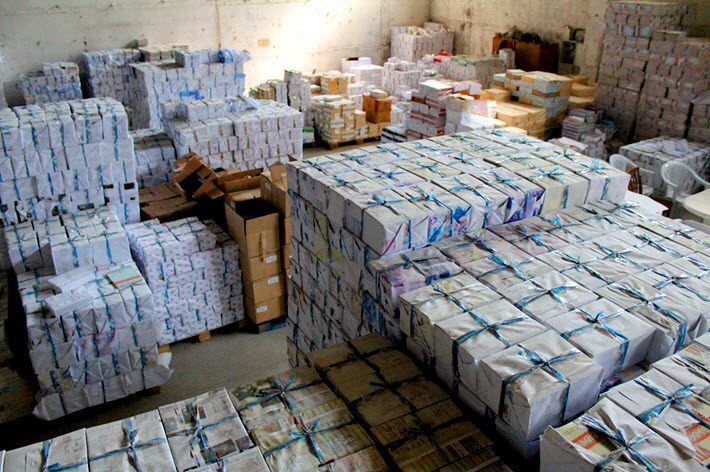 Textbooks lie unsold and unused in a warehouse in Georgia, where the government has printed and distributed its own copies. Image: Provided by Intelekti Publishing, Tbilisi

Publishers With ‘Nothing To Lose’

The only schoolbook publisher not affected by the government’s action, Jobava says, is Macmillan, which provides English-language textbooks in an ongoing arrangement. “What this means is that Georgian and international publishers aren’t being treated the same.”

As for her own company and its sister textbook publishers in Georgia, Jobava says they’re in lockstep and standing firm. “The publishers say they have nothing to lose,” she says, “and are standing on their position very together and very firmly, saying that they refuse to work on creating new textbooks under ambiguous rules offered by the government.”

The last meeting between publishers and the ministry, she says, ended on February 28 in a walkout by the publishers.

And when the authors were called to the ministry’s meeting on March 10, the majority of them, too, left that meeting in protest, she says.

That leaves the scenario, Gvantsa Jobava says, in a precarious and unpredictable state. And it appears that the IPA-EPF mission will arrive at the conference later this month in Tbilisi in the midst of a bitter standoff.