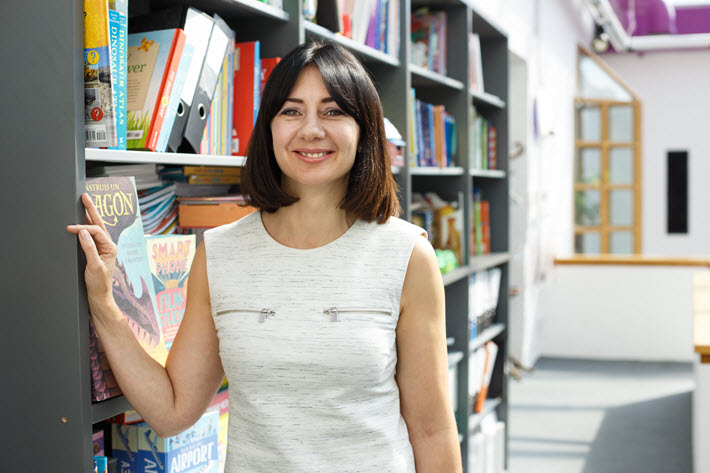 International rights directors at two UK publishers are potential ‘Nibbies’ winners this year. Today, they survey the continued importance of rights to an industry in search of new revenue channels. 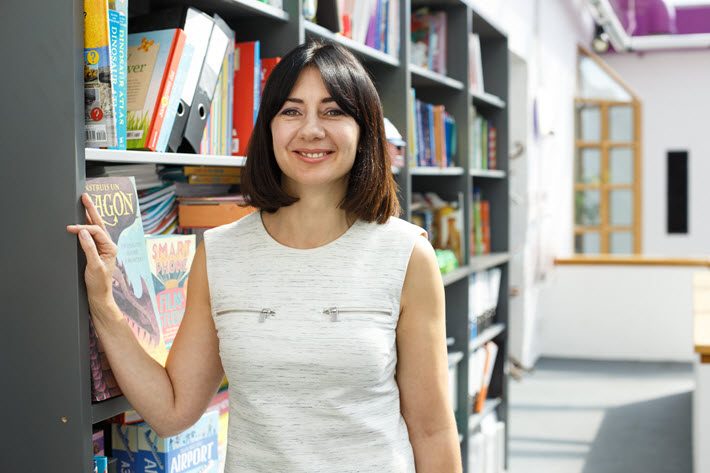 ‘The Deals Offered Are Very Good’

Among the industry awards this year, the British Book Awards’ Rights Professional of the Year honor is a standout.

Sponsored by Frankfurt Book Fair, the prize reflects a heightened focus on rights as a means for world publishing to expand its revenue sources. 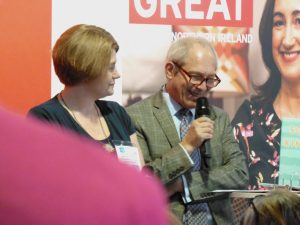 The Bookseller’s Cathy Rentzenbrink and Nigel Roby announce the shortlist for the British Book Awards’ Rights Pro of the Year at London Book Fair on March 15. Image: Porter Anderson

As we reported, earlier this month at London Book Fair, The Bookseller’s Nigel Roby and Cathy Rentzenbrink announced the 23 shortlists of the British Book Awards—or “the Nibbies,” as some call them. In January, The Bookseller announced that it had acquired the awards from the estate of Publishing News’ founder, Fred Newman.

And the Rights Professional of the Year category, with eight nominees, is classified in the overall shortlist at the awards’ site as a collection of “great people” along with shortlisters for Editor of the Year, Literary Agent of the Year, and Individual Bookseller of the Year.

“This needs to be a focus of not only the rights department, but also something publishers should invest in—training every employee to understand rights.” 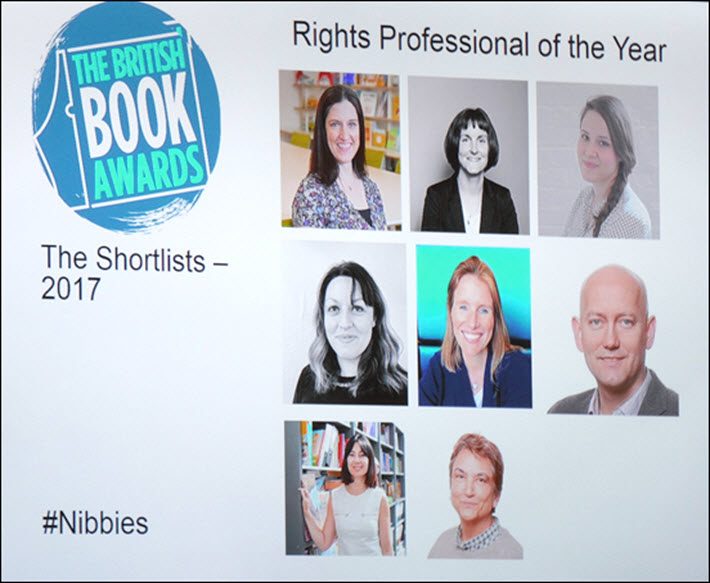 The Nibbies’ Rights Professionals of the Year Shortlist

Representing a cross section of rights departments at both independent and major houses in the UK, the list also spans fiction and nonfiction, adult and children’s.

Publishing Perspectives spoke with two of the nominees to get some of their thoughts on the industry’s rights landscape, and looks forward to talking with more of the shortlisters between now and May 8.

Since our exchanges have occurred in this instance, quite soon after London Book Fair, that event was high in our minds. And we’ve started with the nominees from two houses focused primarily in nonfiction: Summersdale and Quarto Group.

Amy Hunter is rights and digital sales manager with Summersdale, which publishes travel writing, general nonfiction, health and well-being, and gift and humor books. Established in 1990, Summersdale produces more than 150 books per year and has a backlist now of more than 600 titles.

Karine Marko is group foreign sales director with the Quarto Group, which is one of the most internationally positioned independent publishers in the world, with a catalog of more than 10,000 illustrated titles that comprise work from some 50 countries in 37 languages. Topics run from how-to in art instruction to graphic design, home improvement, cooking, gardening, motoring, and crafts.

Marko manages a team of people who collectively speak 12 languages and come from 15 nations.

We start our exchange with Marko and Hunter on the question of the place of rights in the international industry today.

Publishing Perspectives: Our perception is that the place and importance of rights is rising quite fast in the industry, as the development of multiple revenue streams becomes more of an advantage. Do you see the same upturn in interest in smart and aggressive exploitation of rights? 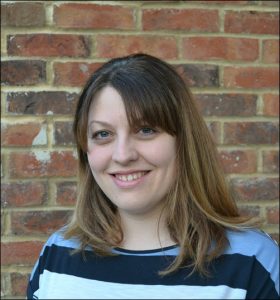 The counterpart to the Quarto Group’s Karine Marko, Amy Hunter is rights and digital sales manager with the UK’s Summersdale. Image: Summersdale

I think publishers are really waking up to this and—combined with healthy advances being offered in certain territories—it really raises the visibility of rights within publishing houses. The media is naturally a reflection of this increased prominence.

Karine Marko: As far as Quarto is concerned, being international is part of our DNA ever since we were founded in 1976.

We’re only focused on illustrated books, so rights and foreign co-editions are a big opportunity and our foreign rights team is at the heart of the business.  In 2016, my team sold foreign rights of Quarto books to more than 550 customers across 49 countries and in 37 languages—and generated more than 20 percent of the Quarto Group’s publishing revenue.

PP: How did London Book Fair go for your company this year?

Hunter: The fact I didn’t get a chance to leave our stand shows that the fair was busy this year.

The weakening of the pound against the dollar and euro probably helped attract more visitors. The general atmosphere seemed more positive and meetings with publisher were buoyant, with many publishing houses doing well.

“We see great scope for developing the market for illustrated nonfiction in the United Arab Emirates as well as the larger Arabic-speaking world.”Karine Marko, Quarto Group

They seemed keen to acquire rights this year and we had a number of impromptu meetings with people who stopped by the stand.

Marko: We’re very pleased with how London Book Fair went. Our teams were on the Quarto stand and it was constantly busy. We’ve got a great list for 2017 and a strong backlist as well.

PP: Your experience at London sounds like what we’re projecting at Frankfurt, too. We see the LitAg already sold out and the “Publishers Corner” adjacent to it on Tuesday going very fast.

Hunter: For a publisher like Summersdale, Frankfurt Book Fair is hugely important, and moving from Hall 8 [in 2016] has been a really positive impact for us in terms of generating more business.

A more central location has meant that we’ve met with many new publishers and it has raised our profile.

At Frankfurt, the international publishers from Hall 8 “has been a really positive impact for us in terms of generating more business.”Amy Hunter, Summersdale

I see this trend continuing into this year. Obviously I haven’t started my schedule yet but I’ve had a number of publishers request that I contact them for an appointment at Frankfurt nearer the time.

Marko: Frankfurt has always been one of the key events of the year for us, alongside London and–increasingly–Bologna (April 3-6).

PP: Will you travel to New York this year for BookExpo (March 31-June 2)?

Hunter: Sadly, not this year.

Marko: Yes I’ll be there. Quarto has five creative offices in the US and about 55 percent of our revenue is generated in the States, so it’s a very important market for us. I’ll be there to meet some of our publishers and some of our key customers.

PP: Can you see particular advantages to one or more genre/sector in rights trading these days? Where might the next strongest sectors and/or geographic territories be? 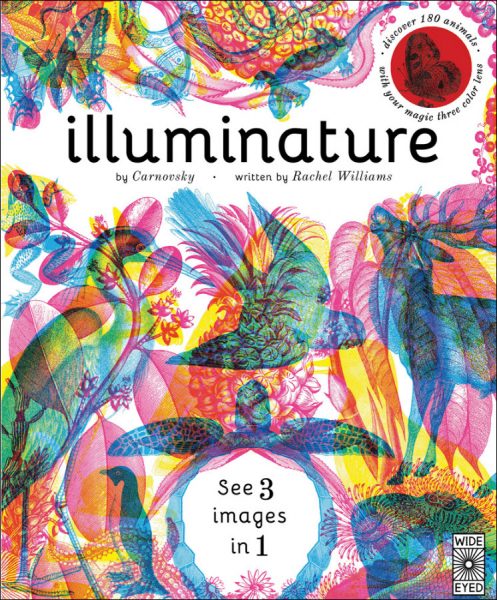 Hunter: We’re actually experiencing growth with Northern European markets, in particular Germany. There seems to be a healthy appetite for acquiring translation rights and the deals offered are very good.

Marko: Children’s has grown exponentially at Quarto over the past few years–both in English language and internationally. Our foreign rights bestselling title across our entire group in 2016 was Illuminature [October 2016]–by our children’s imprint Wide Eyed Editions. We’ve sold it into 16 languages to date, and counting!

In 2016, we also launched a new international publishing partnership with Sharjah-based Kalimat Group.

Our new Kalimat Quarto imprint launched in November 2016 at Sharjah Book Fair with a range of cookbooks in Arabic repurposed from our existing 500 series and distributed throughout the Middle East and North Africa.

“In 2016, my team sold foreign rights of Quarto books to more than 550 customers across 49 countries and in 37 languages—and generated more than 20 percent of the Quarto Group’s publishing revenue.”Karine Marko, Quarto Group

Other categories, including children’s books, are envisaged as the cooperation grows. We see great scope for developing the market for illustrated nonfiction in the United Arab Emirates as well as the larger Arabic-speaking world.

The category is currently dominated by English-language imports–excluding a significant potential readership, as English is not that widely spoken in the Arabic speaking world as a whole.

PP: And can you give us an insight into your outlook for 2017? How do you see this global scenario developing?

Hunter: Technology is giving us a greater access to news and information from all over the world. People aren’t just interested in domestic politicians and issues but want to read stories from across globe.

That means the importance of rights trading becomes paramount in reflecting this trend. We’re living through unprecedented and uncertain political times and acquiring rights internationally is central to understanding this new world we’re living in.