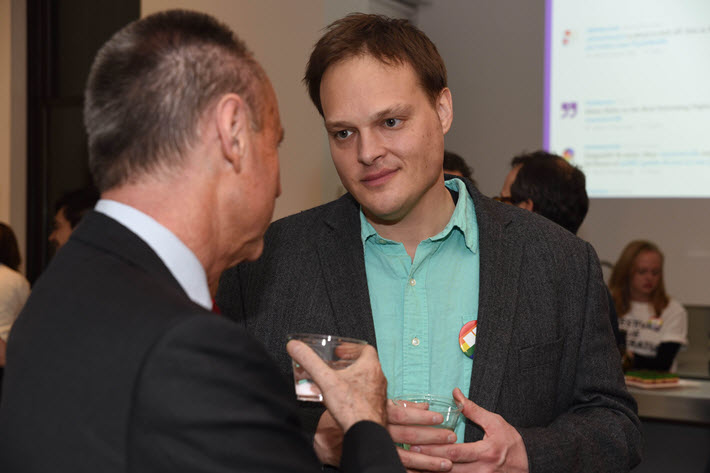 At the Festival Neue Literatur opening, US author Garth Greenwell calls on writers, artists and publishers to use their art to resist ‘moral darkness’ of today’s politics. 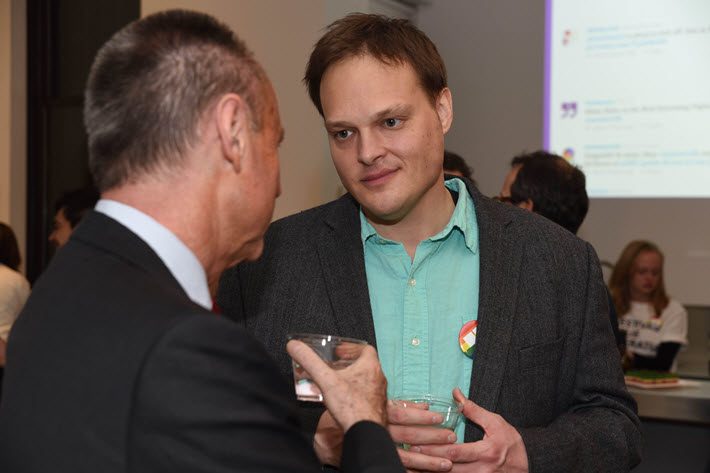 As we’ve reported, the eighth iteration of the Festival Neue Literatur has opened this week with an evening honoring New Directions publisher Barbara Epler with the Friedrich Ulfers Prize. As part of that event, the author Garth Greenwell (What Belongs to You, Macmillan/Farrar, Straus and Giroux) gave an address on Thursday evening (March 2) in New York City, the theme of this year’s festival curated by Peter Blackstock being ‘Queer as Volk.‘ The text of Greenwell’s address has been provided to Publishing Perspectives. —Porter Anderson

‘Something There Is That Doesn’t Love a Wall’

I’ve found myself thinking about this line of Robert Frost’s often over the past few weeks. And, as I’ve been looking forward to this year’s Festival Neue Literatur, which is dedicated to queer writers working in German, I’ve also been thinking about how one of the reasons queerness has so often roused suspicion is its own resistance to walls, its tendency to transgress the various boundaries set around our lives.

In the Lavender Scare of the 1950s, one of the arguments used to justify the purging of queer people from government positions was that queerness troubles stable identities, that it scrambles our usual lines of affiliation: that a queer American might feel a loyalty to foreign queer people that would trump her loyalty to nation.

“As a nation, we are approaching—we are already in—this peculiar moral darkness….Where the State builds walls, our job is to write against and beyond and through them.”Garth Greenwell

For a concrete example of what this looks like, we might remember the house here in New York, on Middagh Street in Brooklyn Heights, where in the 1940s a group of brilliant artists and writers, many of them immigrants and refugees, many of them queer—WH Auden, Benjamin Britten, Klaus Mann—found community and a place of safety during the second World War.

Or we might look to our own lives. I remember, as a 14-year-old in Louisville, Kentucky, standing in front of the bookstore’s Lesbian and Gay Literature section, where in blissful, eager ignorance I picked out books by Yukio Mishima, Jean Genet, Jeanette Winterson, Thomas Mann, knowing that however remote the worlds they described might seem I would find in them something that felt like my own story.

The radical potential of queerness and queer art lies in this promiscuity, this love of mixture. A similar promiscuity has always been one of the animating principles of literature. Nationalist framings of literature, like all attempts to construct a pure national essence or to find a lost greatness in an imagined past, require strenuous acts of erasure, a willfully perverse reading of history.

In fact, the history of literature is the history of mixture and mongrelization, of collaborations and collisions between languages and cultures. There’s no such thing as a vibrant literature behind walls, a literature that is nationally or ethnically or culturally “pure.” The impulse toward art despises purity in this sense.

Something there is that doesn’t love a wall.Robert Frost

Much of the dream of liberal democracy has been to establish certain rights and defenses adhering to legal persons, and then to expand that category of personhood so that those rights and defenses are distributed more broadly. This is what is meant, I think, in the idea that the arc of the moral universe bends toward justice. But in our strange and disconcerting moment there’s a desire not to expand but to restrict this category, to build walls that serve to separate persons from non-persons, to strip from human beings those legal fictions—rights, protections, democratic norms—that are our best defense, not against the barbarians we imagine at our gates but against the barbarians we are, against our own worst natures.

Queer people know perfectly well that there’s nothing natural or inevitable about the idea of rights or legally protected persons or citizens, that these are imagined categories, which require constantly renewed efforts of the imagination to sustain. We’re being reminded now how easily our imaginations can fail. It’s not the universe that bends toward justice, but we who must strive for it.

“There’s no such thing as a vibrant literature behind walls, a literature that is nationally or ethnically or culturally ‘pure.’ The impulse toward art despises purity in this sense.”Garth Greenwell

This makes the work of imaginative artists more urgent, and it makes occasions like this festival more precious, when writers of different nationalities and different languages come together for conversations about how best to do that work.

I’m sure that many of you know the Robert Frost poem I’ve been quoting from. In it, the speaker joins his neighbor to mend the stone wall that separates their properties. Somehow that wall is always falling down: animals and hunters disturb the stones, or maybe elves do, the speaker thinks, or maybe the wall falls apart, as walls are wont to do, beneath its own weight.

But really, the poem suggests, the thing that doesn’t love a wall is the poet’s own intelligence. “Good walls make good neighbors,” his neighbor says, but the speaker questions this bit of country wisdom. “Why do they make good neighbors,” he asks. “Before I built a wall I’d ask to know / What I was walling in or walling out, / And to whom I was like to give offense.” But his neighbor just repeats his refrain, refusing to “go behind his father’s saying.”

The poem turns ominous, as Frost’s poems often do, finding something savage behind the custom of apparent common sense.

I see him there
Bringing a stone grasped firmly by the top
In each hand, like an old-stone savage armed.
He moves in darkness as it seems to me,
Not of woods only and the shade of trees.

As a nation, we are approaching—we are already in—this peculiar moral darkness. Where the State withdraws its recognition, where it denies the dignity and value of human lives, the work of art is to offer an existentially compelling account of that value, to cast over the bare life of the human being the raiment of the human person. Where the State builds walls, our job is to write against and beyond and through them.

“Something there is that doesn’t love a wall, / That wants it down,” Frost writes. He’s talking about us, and about the work we must do. 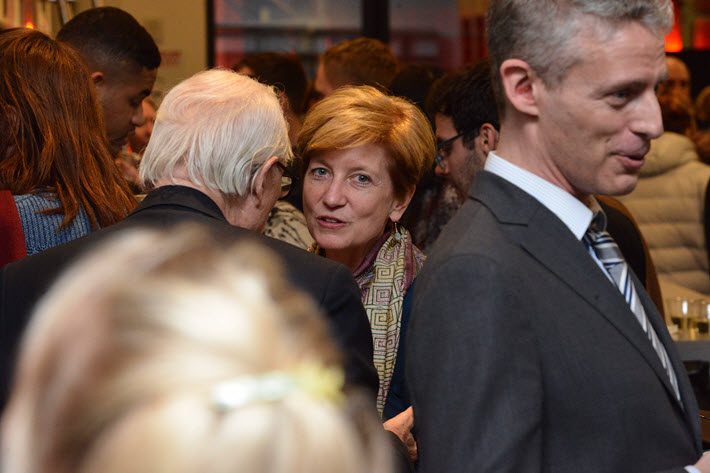 Garth Greenwell is the author of  What Belongs to You, which was longlisted for the National Book Award and shortlisted for the Center for Fiction First Novel Prize and the LA Times Book Prize. A New York Times Book Review Editors’ Choice, it was named a Best Book of 2016 by The New York Times, The New Yorker, Publishers Weekly, and over 50 other publications. His short fiction has appeared in The Paris Review, A Public Space, and VICE, and his nonfiction in The New Yorker, The Atlantic, and The London Review of Books. He lives in Iowa City.

More on the Festival Neue Literatur.