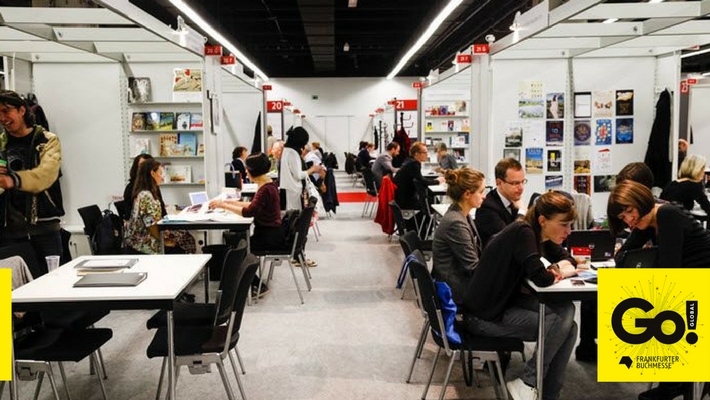 With Frankfurt’s agents and scouts center an early sell-out, the fair recommends quick bookings in the adjacent Publishers Rights Corner, scheduled for October 10. 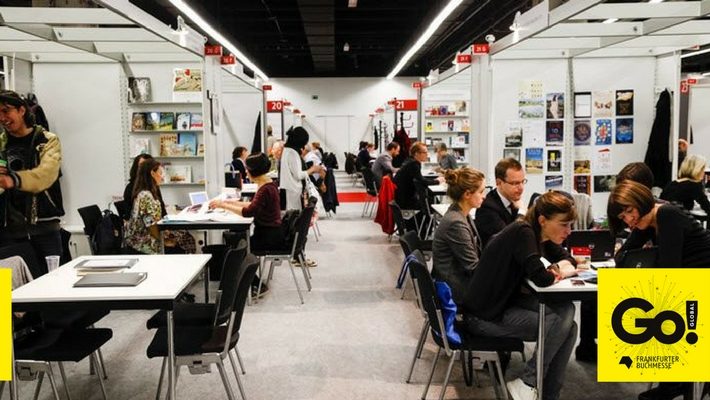 The heart of the Frankfurt Book Fair, its Literary Agents & Scouts Center (LitAg) has sold out for the 2017’fair, which runs October 11 through 15.

Introduced last year, an additional pre-fair trading day facility for publishers has been added and, once more, the Publishers Rights Corner—set adjacent to the LitAg—will be operating on the Tuesday, October 10, so that publishers have a place to work and meet before Frankfurt’s full show floors open on the 11th.

Last year, the LitAg held 460 tables, which sold out during the spring. This year, the number was raised to 480 tables, and those have sold out even more quickly. UPDATE October 2017: Frankfurter Buchmesse administrators have announced that 20 more tables have been sold, meaning that the LitAg has beaten its own records and sold a total 500 tables.

LitAg director Riky Stock says that one factor in the rising numbers of seats and sales has to do with the fact that, “Agencies are tending to bring more personnel to Frankfurt, so they need more than one table.”

“The fact that the LitAg has been sold out so early,” Stock says, “shows that email exchanges and phone calls cannot replace face-to-face conversations, meeting and reconnecting, or chance encounters the fair offers.”

Traditionally, the LitAg center in Hall 6.3 has always been open the day before the Frankfurter Buchmesse. In 2016, with the inauguration of the Publishers Rights Corner, the agents of the LitAg were met by international rights managers from publishers in Spanish, German, Icelandic, British, and US companies.

In a prepared statement, the fair quotes Szilvia Molnar, foreign rights manager of Sterling Lord Literistic, saying, “It was so good to have meetings all day without worrying about seats, or not finding your meeting. It was definitely my most productive Tuesday since I’ve been attending the fair.”

By placing the Publishers Rights Corner immediately adjacent to the LitAg, the fair is able to offer rights directors an alternative to “the hofs”—hotels that traditionally host meetings between agents and publishers on the day before Frankfurt starts. An early-bird rate is available (20 percent discount) on these seats until March 31. More information is here and for registration, rights directors can contact Stock at rikystock@book-fair.com.

For a third year, Frankfurt is offering a free eight-square-meter stand to the exhibitor offering the best answers three questions.

The competition is open not only to publishers but also to “all producers of creative content are encouraged to participate: illustrators, game developers, corporate publishers, vloggers, bloggers, photographers and many others.”

In 2016, the competition drew 140 applications from 30 countries, and they came from many disciplines.

The deadline to apply is May 31 and is open to companies that have never exhibited at Frankfurt. The three questions to which applicants respond are:

Chosen by the fair’s jury, the winner will be notified in June. For full details, see the Wildcard page on the Frankfurt Book Fair site.