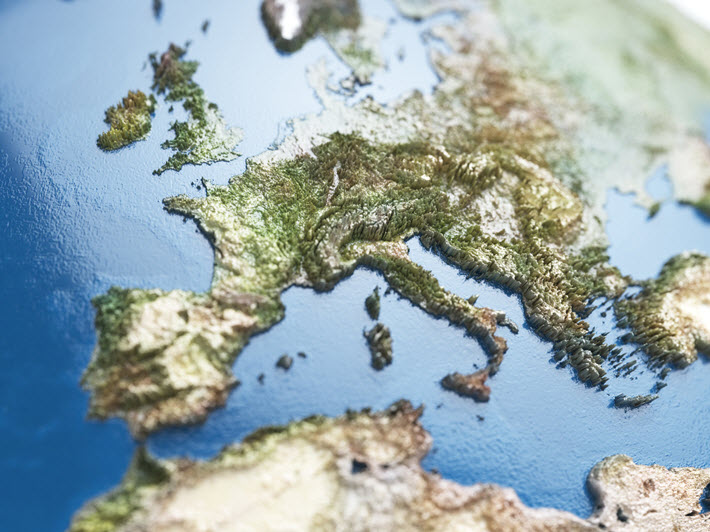 Producing as many as 575,000 new titles in 2015—and directly employing more than 150,000 people—the highly varied publishing industries of Europe come together in a new report. 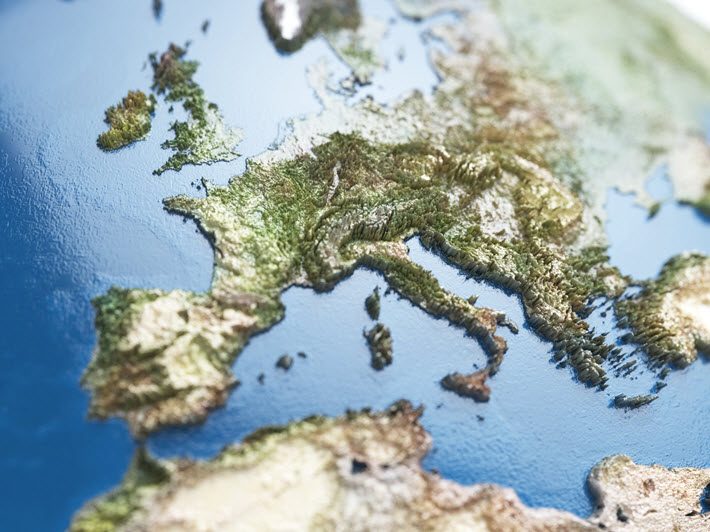 Earlier this month, the Federation of European Publishers (FEP) released the 2017 edition of its The Book Sector in Europe: Facts and Figures report.

In his foreword to the report, FEP’s president, Henrique Mota of Portugal’s Principia, writes of wanting FEP to “position itself as a trusted source of information in the very varied and not always reliable landscape of book sector statistics, to shape the quantitative narrative around the sector and to help dispel some myths.”

Considering that somewhere in the international publishing industry someone is always sure to be wishing aloud for better information on the business, this sounds like a great area of concentration for the Brussels-based organization. 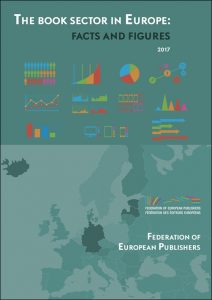 “Book publishing,” writes Mota, “generates a turnover of €22 to 24 billion (US$23.5 to 25.6 billion) per year in the European Union and European Economic Area alone, for a total market value of €36 to 40 billion (US$38.4 to – US$42.7 billion)—another testament to the fact that the majority of the world’s top publishing groups are European-owned: six to eight of the top 10 publishing groups, according to the annual Global Ranking of the Publishing Industry).”

European publishing houses directly employ some 150,000 people, Mota writes, and that number goes as high as 700,000 when the workers of associated companies and services are factored in.

In the long view, Mota says, the economic crisis starting in 2008 affected for year the various national book industries of Europe. “Those most strongly affected by the crisis also experienced, in most cases, the largest decreases in the book market.”

Europe’s new-title output, Mota writes, was around 575,000 titles per year. “This is due in part to the emergence of the ebook market, which has generated a large increase in the catalog of commercially available titles.”

Let’s look at some specific insights from the report. 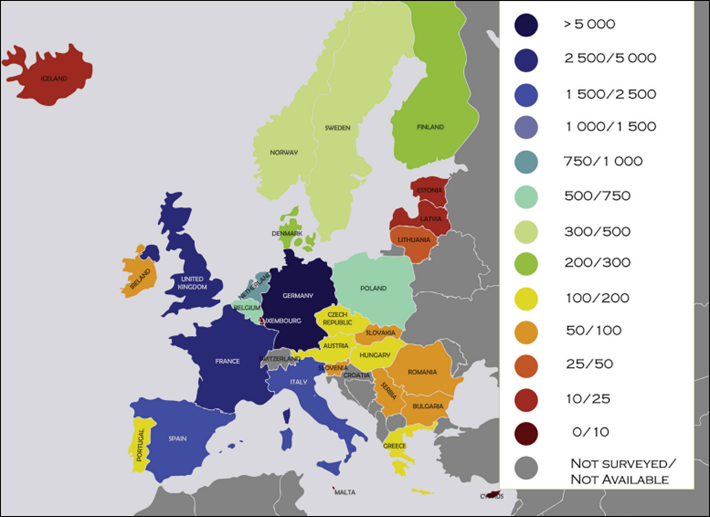 The data behind the above map refer to net publishers’ revenues from book sales, excluding exports.

“The latest trends seem to indicate that the signs of recovery seen in 2015 may be the beginning of a new phase of sustainable growth,” says the FEP report.

In reference to questions of print vs. digital, the report’s text here notes, “If between 2009 and 2014 print sales decreased almost everywhere and digital sales helped to contain the losses—and in a few cases were sufficient to provide overall growth—now print seems to account for most of the current recovery.”

As is experienced everywhere impacted by online retail, “The lack of precise data from certain large retailers, as well as the emergence of self-publishing,” writes the FEP survey’s authors, “make it difficult to obtain detailed reliable information on the ebook market.”

Nevertheless, a guess is hazarded at digital representing some 6 to 7 percent of the total market in Europe.

There are national differences in digital’s market presence, of course, and some of them come to light in the following chart. 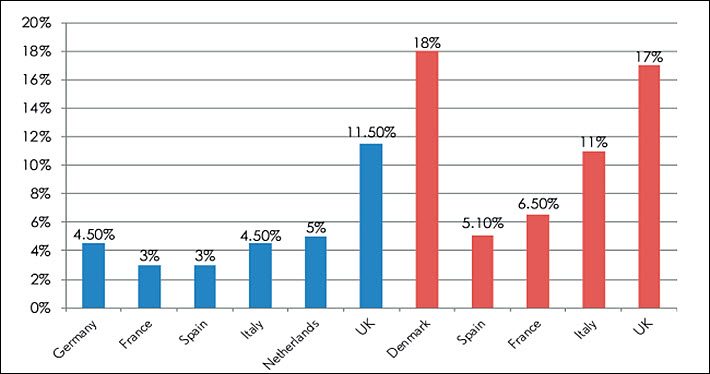 The above graphic, FEP cautions, may not be as helpful as we might wish, in that in Germany, France, Italy, and The Netherlands, “the share of ebooks refers to the trade/consumer books sector only (excluding scientific and educational books). Due to differences in methodology, in most cases figures are not comparable between countries.”

And in an interesting observation, the FEP report’s text reads, “It is hard to predict how the ebook market will develop in the coming years, as we have passed several dates at which the demise of paper had been predicted.”

Among the report’s most interesting charts is one that runs from 2006 to 2015 and revealing the relative sizes of sectors within the industry  in terms of net turnover. 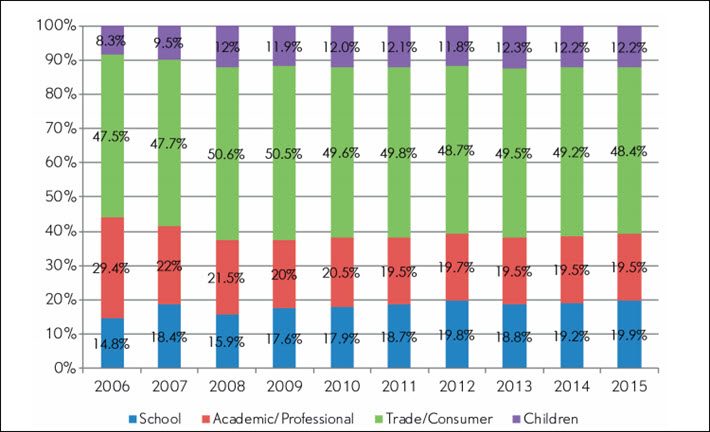 In discussing the relevance of the sectors, the report’s text reads, in part, “While consumer books (including children’s books) represent around 60 percent of the market, another 40 percent of revenues are generated by educational and academic books.

“Moreover, there are significant differences at national level: in some countries, especially from small linguistic areas or sharing their language with much larger markets, educational publishing is often the backbone that supports most of the publishing industry, representing anywhere between one- and two-thirds of the whole publishers’ turnover.”

As seems to be the case on a nearly universal level, young people’s literature is understood in the report to hold special viability: “It is interesting to note the resilience in particular of children’s books during the economic crisis; most likely books have been seen as a gift offering high value for money.”

More insights and data is available from the Federation of European Publishers report, in PDF download here.