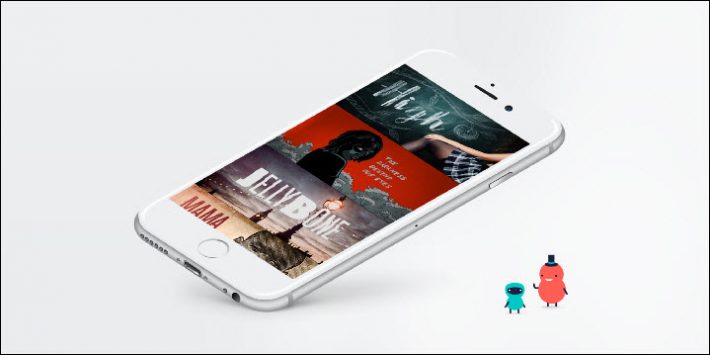 A selection of ‘Originals’ on the oolipo mobile app

‘To Win Back the Young Market’

Described to Publishing Perspectives by its chief product officer Ryan David Mullins as “Tinder for mobile stories,” the Cologne-based mobile storytelling platform oolipo has announced the launch of its iOS app. An Android version is anticipated to follow in early summer, according to press materials.

“There are no comparable products on the market,” says Bastei Lübbe CEO Thomas Schierack in a prepared statement on March 21, “and we know that we are entering new territory. But we are convinced that the idea of bringing multimedia formats to smartphones via a digital platform has enormous potential.”

The idea of oolipo—as Mullins explained in an interview in October with Publishing Perspectives—is that stories on the platform can include video and audio, as well as what the new release describes as “geolocation, tilt sensors, and much more” in terms of typical smartphone features.

“Within the context of continuous further development,” the press release reads, “it is planned in the medium-term to open oolipo as a platform for external content. External authors and self-publishers will have the opportunity to design their own stories using the new, multimedia oolipo format and publish them on the oolipo platform.”

At the moment, the company says, “oolipo enters the stage with a total of eight English-language series and four German-language series, including London I, an [oolipo] Original produced by the British YouTube star Suli Breaks in association with oolipo, as well as The Message from Bastei Lübbe’s successful author Tibor Rode.”

Also featured is JellyBone by the Canadian author Kate Pullinger, a professor at Bath Spa University in the UK and the creative energy behind the long-running Inanimate Alice project. Mullins has told Publishing Perspectives that JellyBone is “about a young woman in London who starts receiving strange, cryptic messages on her phone. She doesn’t know from whom or why, nor does she have much context to decipher their meaning. It melds crime, noir, London, and young adult in a compelling way.” 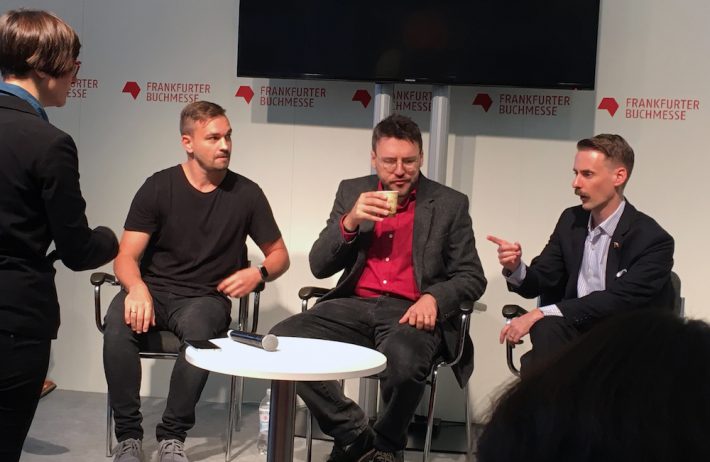 First Episodes of Series Are Free

“We are convinced that the idea of bringing multimedia formats to smartphones via a digital platform has enormous potential.”Thomas Schierack

The business model for the product, according to company materials, “follows successful examples from the mobile games industry.

“Users purchase credits in the oolipo app which can be exchanged for individual episodes or whole seasons of oolipo series. One episode of an oolipo Original costs 90 credits, which is equivalent to 90 euro cents,” or roughly US$1.

“The first episode of each series or season is available free. In addition, after registering, each user receives a welcome bonus of 250 credits, which can be redeemed for stories.”

Initially, the oolipo Original four-part series Get Used to It is is free and is said to involve a non-governmental organization (NGO) dedicated to introducing young women to skateboarding.

The initial target markets for oolipo, according to Bastei Lübbe, are Germany, Austria, Switzerland, and the UK, with stories “particularly attractive for the US market and other English-speaking countries” to follow late this year or early in 2018.

‘Build Up Our International Presence’

“We are fully aware that it is almost impossible to make realistic forecasts of which parts will be popular with readers and how quickly.”Thomas Schierack

Schierack is quoted, saying, “Our goal is first to develop these markets and then to build up our international presence step-by-step in the next years.”

And it’s difficult, the company says, to predict how many users to expect at this point.

“Our goal is to push user numbers to a seven-digit range by the end of 2019,” says Schierack. “But we are also fully aware that it is almost impossible to make realistic forecasts of which parts will be popular with readers and how quickly.”

Overall, Schierack calls oolipo “a great opportunity to win back the young target market which seemed to be lost to reading good content.”

In a separate report in December, Bastei Lübbe announced that Blue Sky Tech Ventures’ Andrew Irvine, who joined the oolipo team in November 2015, had stepped down in a planned resignation.

The oolipo beta was launched in August 2016. A part of the 2015 FutureBook BookTech Showcase, oolipo has been described by Mullins to us as having an interactive feature in some cases for users, called “threads.”

“Users see a symbol that alerts them to extra content,” he told Publishing Perspectives, “that takes them down a different path to, say, a character backstory, a map, character bio, maybe interview with the author.”