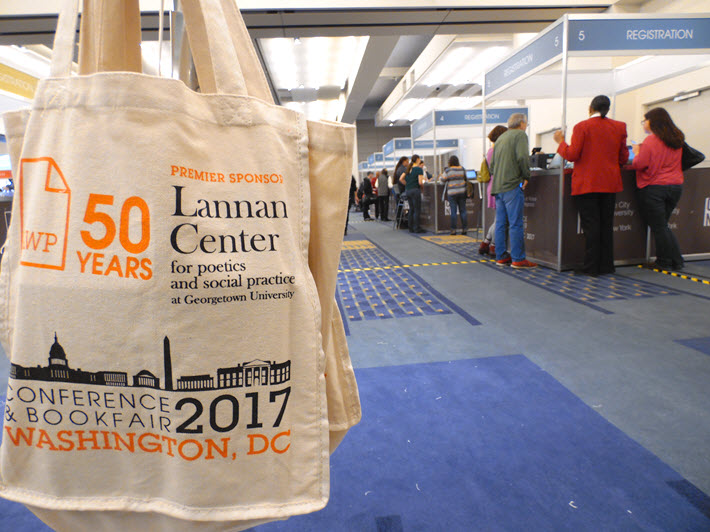 In its 50th year, AWP (the Association of Writers and Writing Programs) returns to the US capital, with special focus on literature in a political society. 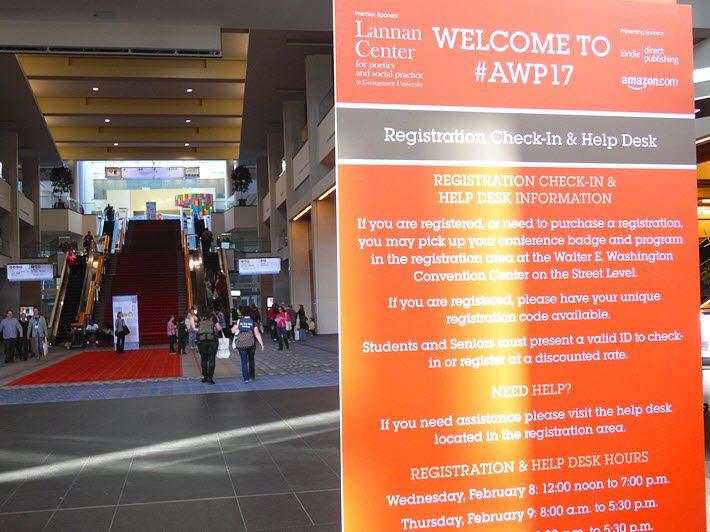 Diversity is a pressing concern in many parts of the publishing business today—and in many countries’ industries. Traditionally patronized by a consumer base that looks no more diverse than many trade house staffs, the international industry has begun to face its longtime limitations seriously.

AWP has been slow—as has the industry—to cultivate male readers and writers, even as it proudly champions other needs of the community.

In the UK last year, Penguin Random House did away with the university degree as a requirement for entry-level employment to draw “a more varied candidate pool.” And as early as 2013, an Equality in Publishing conference in London was reflecting on an industry that’s “white, middle-class, and female.”

In September, Bookseller Shooting Star Emma Smith, at Orion’s Trapeze imprint, told Publishing Perspectives, “Someone said ‘The problem with publishing is that there are too many white middle-class girls called Emma.’ And here I am.”

In the States, publishing people still are deeply troubled by the revelations of last year’s Lee and Lowe study: like the UK’s industry, the US business is “white, middle-class, and female” in overwhelming proportions, and those findings have been major focal points in settings from Nielsen’s conference at the Romance Writers of America’s gathering to Sisters in Crime’s own self-survey.

What’s more, publishing critically needs a broader readership, just as it needs a less exclusive workforce. Its over-production of content, both in the trade and in the self-publishing sectors alike, has created a marketplace in which more and more voices are willing to say, as Unbound’s Jason Cooper says to Publishing Perspectives, that there are too many books—and not enough readers.

To find a younger and more inclusive ray of hope, look to Washington, DC, this week.

Some readers may find this surprising. Trumpian Washington isn’t a political context in which diversity might first come to mind.

But this is AWP week. The Association of Writers and Writing Programs this year is back in Washington, near its Fairfax headquarters at George Mason University, for its conference through Saturday (February 11).

Some 12,000 primarily campus-based attendees are here for 550 events delivered in four days by 2,000 presenters. The book fair at #AWP17 alone features more than 800 presses, journals, and literary organizations from many parts of the world.

And the opening words on AWP’s mobile app leave no doubt as to the event’s priorities:

“A Welcome To All: AWP welcomes diversity and the participation of individuals in its activities regardless of race, ethnicity, nationality, sexual orientation, gender expression or identity, socio-economic status, age, disability, or religious or political belief. AWP encourages the contributions of all its members and attendees at all conferences, and we are proud to create an event that supports such inclusive participation.”

In no year in recent memory have those declarations of inclusivity seemed of such moment to these attendees, most of them young adults.

AWP should be especially interesting this year. 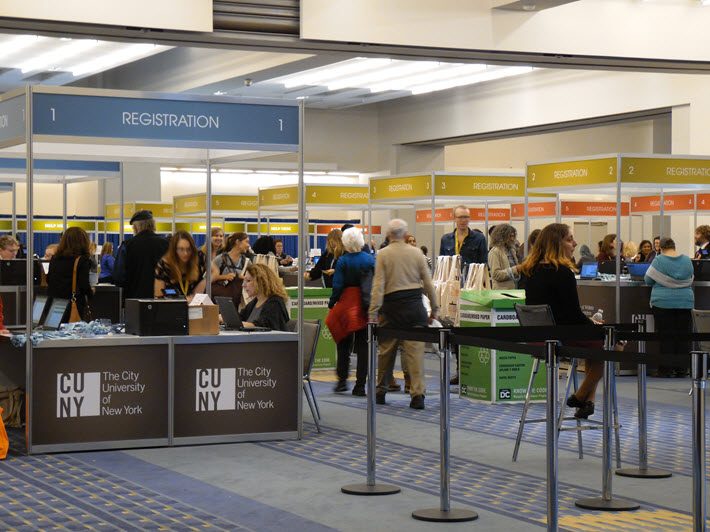 Staffers in the registration hall at AWP 2017 brace for an anticipated 12,000 attendees. Image: Porter Anderson

AWP is the service organization of campus writing programs in the United States and has associations with international programs and writers, as well. It was founded in 1967 and its community comprises, organizers say, nearly 50,000 writers, 550 college and university creative writing programs, and some 150 writers’ conferences and centers.

PBS will have Rich Fahle and his ‘Book View Now’ crew on-site at the AWP Bookfair with live interviews of authors.

This is an event that international MFA programs sponsor in order to attract undergraduate writers to their graduate-level programs.

Our name badges hang from lanyards that advertise the University of Tampa’s low-residency MFA. (AWP next year will for the first time be seated in palmy Tampa.) And our Marriott Marquis room keys remind us of the Northeast Ohio Master of Fine Arts in Creative Writing. Convention center conference rooms buzz with recruitment meetings as these MFA programs work the crowd and faculties from many halls of ivy read from their latest writings.

In part through the support of the National Endowment for the Arts, AWP has become the largest literary conference in North America.

As might be expected in what the Authors Guild calls a “not normal year,” some AWP attendees will take advantage of their trips to Washington to engage in protests of the fraught political energy in the capital city.

A group calling itself “Writers Resist Trump,” for example, is said to have some 900 members or more who “will be making a field trip from AWP to Capitol Hill to visit the offices of our Senators and Representatives to make the case against the Trump agenda,” according to the group’s Facebook page.

But many more attendees will find much of AWP’s programming itself—as devised by its individual and organizational members—firmly based messaging and missions of diversity.

A quick survey of some of the more diversity-focused programming surfaces phrases such as “a subversive force for art, youth, and culture” and “texts as political narrative.”

A complete listing of all programming events—which also include craft sessions and many readings—is here. 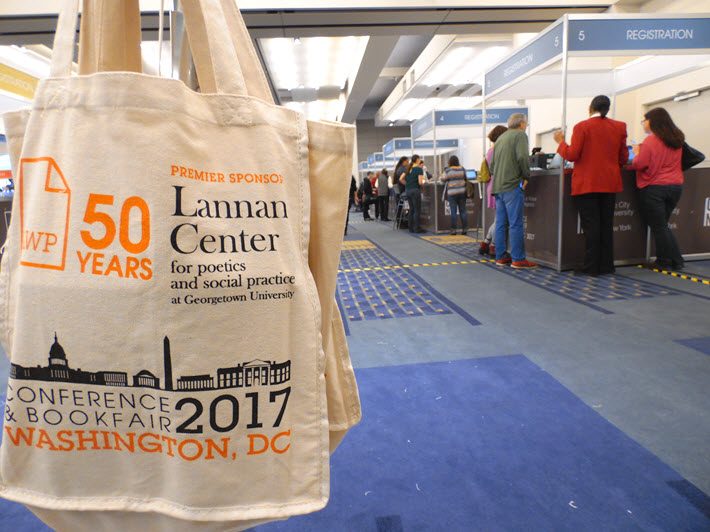 AWP 2017 tote bags will be stuffed with books, flyers, pamphlets, and hauled back to as many as 550 creative writing programs this week. Image: Porter Anderson

Over the years, AWP has proved to have some of the difficulties in its own development that can be expected in any culturally based evolving organization.

“Professional publishing observers have pointed out that AWP is as light on business-related material for its attendees as too many campus-based programs are.”

“Diversity,” for example, seems to have little to do with men in most AWP programming, despite the fact that publishing is far too dependent on women both in its consumer base and its staffing. Even this diversity needs diversity, of course, and the organization has been slow—as has the industry—to grow toward gender inclusion and the cultivation of male readers and writers, even as it proudly champions other needs of the community.

One planned session that addresses men’s writing and assumptions in Latin culture is here: That’s My Mami We’re Writing About: A Reading by Latino Male Authors, according to its description, “challenges the notion that writing by Latino male authors is paternalistic and that Latino cultures and families are predominantly and primarily influenced by male figures. Representing diverse voices with roots in Cuba, Mexico, El Salvador, and parts of the US, including Puerto Rico, this reading by authors who have published books about lives in inner cities, war-torn countries, and nature reestablishes the roles of mothers in society and in the Latino male poetic imagination.”

But overall, there seem to be no sessions for male students that treat their needs and dilemmas, as there are so many for various aspects of women’s experiences in writing. This, even as there’s good news on the young-male reading front from Nielsen, as Publishing Perspectives has reported.

What’s more, many professional publishing observers have pointed out that AWP is as light on business-related material for its attendees as too many campus-based programs are.

While there are exceptions, of course, most programs in the halls of ivy still tend to focus on the world of literature as art without preparing students for the digitally disrupted and entertainment-challenged industry they’re about to enter as writers. Some programming looks at issues in the business of writing, but there’s nothing like the emphasis needed in an industry experiencing such marketplace flux.

Nevertheless, if even a small percentage of each year’s AWP attendance go on to careers in publishing, that rising generation will be entering the workforce with a profoundly more egalitarian and inclusive understanding of literature’s place in the world. And this can only be good for the industry and the culture it serves.