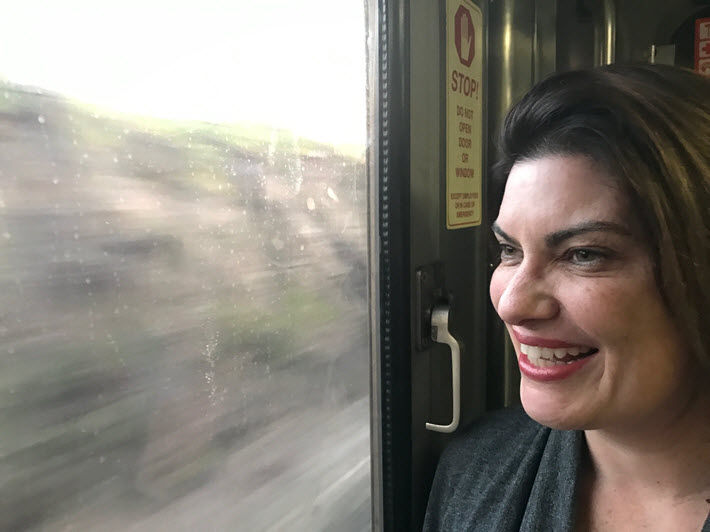 ‘For a long stretch of this country, there’s no wi-fi.’ And for a busy Associated Press reporter who’d won a berth as an Amtrak Residency writer, riding off-grid was perfect. 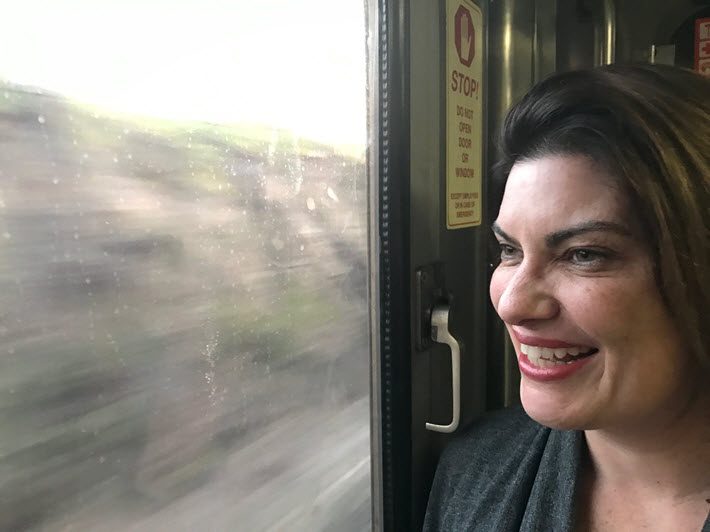 Journalist and author Tamara Lush on her Amtrak Residency in January. Image: Provided by the author

Now that she’s back from her Amtrak  Residency, “It feels kind of weird to be stationary for a few days,” says Tamara Lush with a laugh. The journalist and romance author spent the better part of two weeks last month as a member of the latest group of 24 writers chosen for the coveted chance to write on the rails of America.

Begun in 2014, Amtrak’s biennial program provides lucky writers selected for it their train tickets, private sleeper “roomette” accommodations with a desk, and food in the dining car—not your alcohol, Lush notes—for a set of travel segments the writer chooses. Each author puts together the journey he or she wants.

Lush, who began her work as an author with a two-book contract with Boroughs Publishing Group, is regaining her rights to those titles, Hot Shade and Into the Heat, and has self-published Tell Me a Story, a five-part serial novel. Since she’s producing her fiction as an indie, she wanted to be at DBW Indie Author, the third conference day of Digital Book World in January.

So she arranged to begin her Amtrak Residency in Orlando on January 17, getting her to New York in time for the conference. Then she continued on to Chicago, “where I met my critique partner for the first time.

“And then from Chicago to San Francisco,” she says. “My dad lives near there, so I stopped there for a night. Then down to LA, met with some friends for a night and a day in LA. And then I got back onto the train and went to New Orleans.”

On the Amtrak Residency, “I could write and rewrite the manuscript. Being alone, in my little cabin was really nice. No distractions.”Tamara Lush

Based in St. Petersburg—as the palmy motif on her site might suggest—she wasn’t just on the train to work on revisions for her forthcoming book, Constant Craving. Lush is also a longtime Associated Press reporter whose beat is the Gulf Coast of Florida.

Lush broke the news for the AP last month from Ellenton, Florida, for example, that the Ringling Bros. and Barnum & Bailey Circus is closing in May after 146 years.  And earlier this month, she and her AP colleague Terry Spencer filed a story on how much confusion 911 calls reveal during the shooting incident in January at Fort Lauderdale-Hollywood International Airport where, for hours, news videographers watched crowds of scared passengers rushing from one part of the tarmac to another.

So her residency was spent working on two projects—her novel revisions and a series of 14 Tales From a Train for the AP, each a conversation with a fellow traveler.

For example, she speaks with 22-year-old Tereseta Esqueda, a student at the University of Texas at El Paso who’s concerned about the political thunder she can hear all the way from Washington, DC:

“I think the future of America is a big issue. It’s really scary. For example, my grandmother and grandfather, and other family in Juarez. The issue of a wall, it’s really complicated to me. It’s my family. I don’t want to be separated from them. I’m scared about it. For everybody. A wall means the division of the world. It’s not just Mexico or the United States.”

And Lush talks with 69-year-old civil-rights movement veteran Ray Ballare, who tells her that he finds his poise in the experience he’s had in 18 years of international travel:

“I was accepted better overseas than I am here in the States because I am an American. It didn’t matter if I was black or white, I was an American. America is the strongest country in the world, and no matter what all these other countries are saying, everybody wants to be American.” 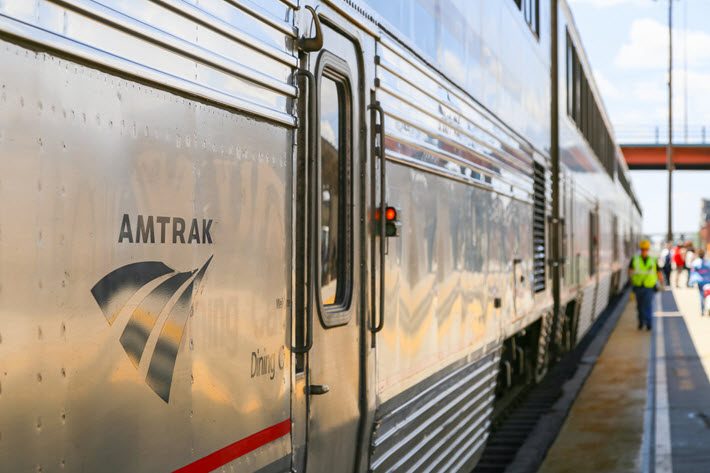 Rolling Past the Bumps

In its initial incarnation, the residency drew criticism from many writers for terms and conditions of application that gave Amtrak the right to own and/or exploit content provided as part of its entry.

Writer Beware watchdog columnist Victoria Strauss wrote about the dilemma in 2014, noting that any applicant, whether accepted for the program nor not, was subject to the initial terms’ grant of all rights to Amtrak. Strauss, who frequently prefers to offer her criticism with constructive suggestion, offered the National Railroad Passenger Corporation a series of suggestions that may well have been taken up by the transit company.

While there have been questions about the racial diversity of chosen writer-riders in ensuing years, complaints about inappropriate rights considerations have subsided, and Lush says she has encountered no such rights impositions, nor is she required to produce any content for or about the residency.

“The only stipulation,” in fact, she says, had to do with her AP series of interviews: “They said not to interview employees” of Amtrak as subjects for Tails From a Train—”which was totally fine,” in that her project was meant to be about passengers, of course. 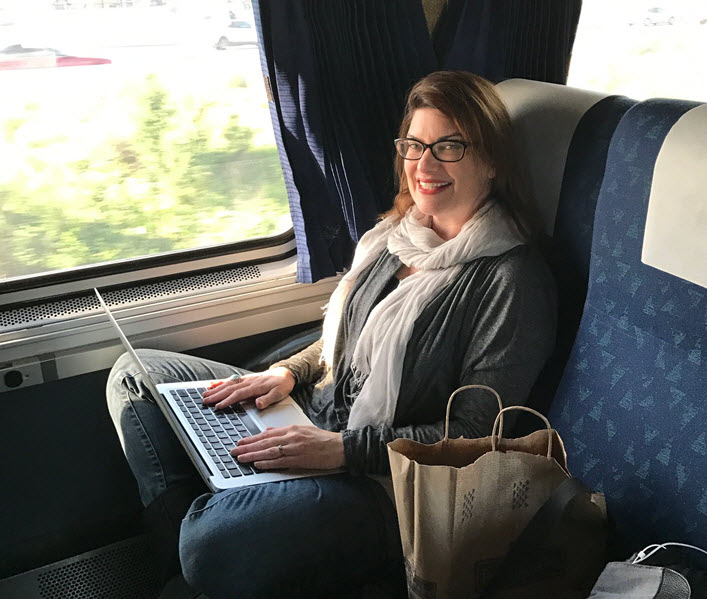 Tamara Lush on Amtrak. Image: Provided by the author

One of the interesting elements of Lush’s fiction is that it rides parallel to her journalism. The book she’s revising for the fall, Constant Craving is another serial novel and, “It’s about a newspaper publisher who’s trying to save her dying family newspaper…It’s a little bit of an allegory for the newspaper industry, which I’ve been intimately involved with for 25 years.”

Lush has chosen very carefully to self-publish, in part because of those 25 years in the news business, as any of her fellow journalists will understand.

“If I take anything away from the trip, it’s to get reacquainted with my Freedom app and get really buckled down without the noise of the Internet.”Tamara Lush

Lush says she’s not averse to working again with a publisher under the right circumstances, and she uses professional content editing and copy editing. “I don’t get the indies who say they’re going to have their beta readers do the editing.” A background in professional journalism makes you appreciate genuine editing. And writing romance, she concedes, is something of an antidote to the hard-news backdrop of her career in journalism.

The real impact of the Amtrak Residency, Lush says, was in the wide open spaces of the westerly route from Chicago. “I could write and rewrite the manuscript. Being alone, in my little cabin was really nice. No distractions.

“And this is the big thing,” she says, almost conspiratorially. “For a long stretch of this country, there’s no wi-fi. You can’t even get cell coverage to do your personal hotspot. There was no distraction. And that is huge.

“If I take anything away from the trip, it’s to get reacquainted with my Freedom app and get really buckled down without the noise of the Internet.”