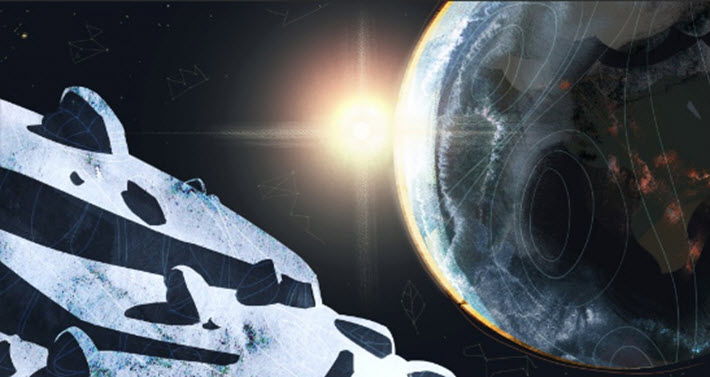 Spain’s Elisa Yuste talks us through leading concepts and directions in apps for kids and young adults in the coming year, including more apps for ‘Android kids.’ 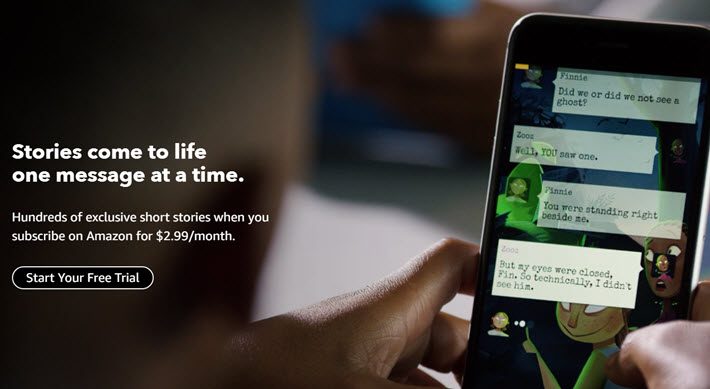 Elisa Yuste credits Amazon Rapids as being among the first apps to offer instant-messaging style storytelling for young readers.

‘Beyond Merely Translating a Story’ 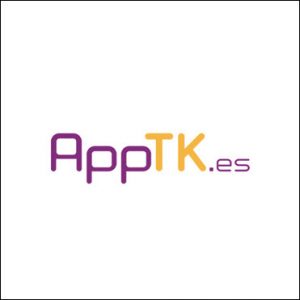 China, Choudhary tells us, was named by the report as the “largest market in terms of iOS App Store revenue.”

Worldwide estimates are that a typical smartphone user is engaging with some 30 apps monthly. 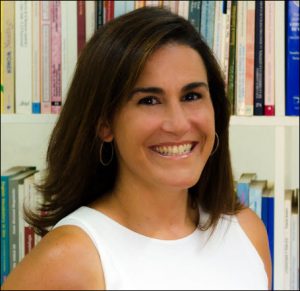 Madrid-based publishing consultant Elisa Yuste works with Spain’s AppTK.es, an “app discovery platform” that specializes in recommendations of apps for young people.  As such, she and her colleagues have a sense for what’s out there and what seems to be gaining the most traction in the field.

We asked Yuste about her Top 10 trends list in young people’s reading-related apps, as put together from her research into what’s ahead this year. Here are her 10 points and her commentary to us on each.

“In 2017, we’ll see a continuation of the drive,” Yuste says, “to go beyond merely translating a story from paper to screen.

“Apps for children and teens will continue to focus on ‘enriched content,’ taking advantage of technical functionality such as animation, interactivity, and gamification. The goal, in these cases, is to explore new storytelling approaches.”

As an example, Yuste points to Wuwu & Co.  an app developed by Step in Books. Wuwu & Co received the Bologna Ragazzi Digital Award for last year. 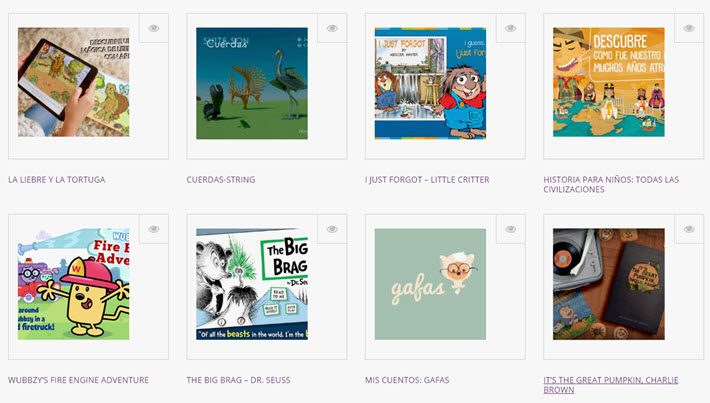 Some of the apps highlighted currently at AppTK.es

“Apps will also play an important role in reading promotion,” Yuste says. “We saw a few examples in the latter part of last year, and we expect this direction to continue growing.”

This is an area that includes the design of reading services, Yuste says, in some cases following the familiar attributes of such platforms as Snapchat or Whatsapp. It also quickly dispels any question that short-burst mobile transmission of reading content is a novel idea, as some product publicists like to suggest.

The first such entry, she says, was Amazon Rapids, Seattle’s subscription app that provides “hundreds of exclusive short stories” at a rate of $2.99 monthly. In this instance, stories are told as instant-message conversations and images exchanged between characters, and the app includes a glossary to help youngsters broaden their vocabularies as they go.

“There have been other interesting initiatives, too,” Yuste says, “like Book Messenger (video) for Penguin Books; Hooked (“fiction for the Snapchat generation), and Adela.

“The first of these,” Yuste tells Publishing Perspectives, “involved Augmented Reality (AR) apps that complement books or other AR markers such as Spellbound.

“Virtual Reality (VR) has also been used in the design of reading materials,” of course, “and AR and VR have been combined at times, as in the new edition of Alice in Wonderland by Parramon.

“On the other hand, we find apps that complement other tangible element such as Marbotic,” which teaches the alphabet and other aspects of reading and writing, “and apps such as offerings from Ochogallos that promote interaction in the real world. In this area, apps remain gateways to various realities for children and young readers.”

“We see apps such as the work of Minibombo that present a merger of elements from children’s books, videogames, TV, cinema, and more.

“This can represent a clear commitment to enlarge the offer through technological developments. We expect to see more apps like My Very Hungry Caterpillar based on children’s literature. These tend to invite the user to create her or his own version of the story, along with literary works devised as videogames such as we find from Cartuchera.

“A hallmark of this group is high levels of interactivity—today a major part of digital proposals—beyond videos and animations.” 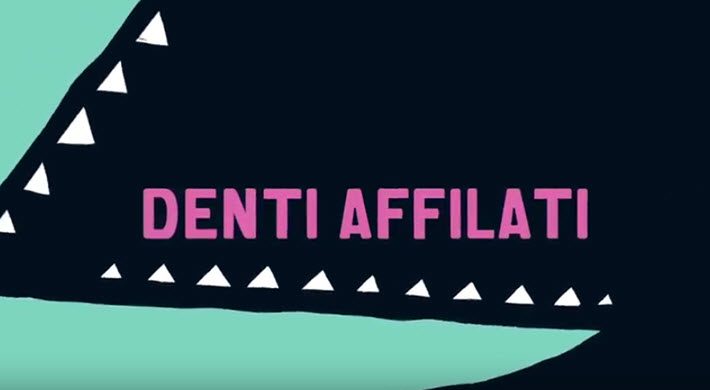 Here, we note the alignment of many apps Yuste mentions to the sort of “maker” creativity-enabling direction Nielsen’s Kristen McLean highlighted in October at the annual Nielsen’s Children’s Book Summit in New York City.

Frequently, “the reader is also an author in the digital environment. This is the main reason we foresee more apps being designed to help children and young people create and develop their own stories.”

Examples Yuste mentions in this group:

Here’s the promotional video for the Spellbound app, which is used for therapeutic playtime with kids in medical settings.

“Many apps’ development we see are aligned with other trends and fads in tech, such as wearables, drones, robots, and smart toys, elements of all of which are significant in children’s entertainment,” Yuste says. “Apps such as Tinybop’s Everything Machine—which can help gain higher performance, are expected to grow quickly.

“Apps can be a versatile and very attractive marketing tool, after all,” Yuste says.

“Parental control is not the best way,” Yuste says, “to help kids make safe and responsible use of technology. But we think it will remain among 2017 trends in children’s apps. For a developer, it’s an interesting resource: it can be used as a promotional strategy, providing a trial to the adult user before making the purchase decision.

“For parents or teachers, viewing and/or access control can be useful when the goal is to monitor the use of an app to follow a user’s progress and provide support.

“Safety plays a major role in production for this audience, which means challenging developers to improve app security in issues of data leaks, insecure data, and confidentiality.” 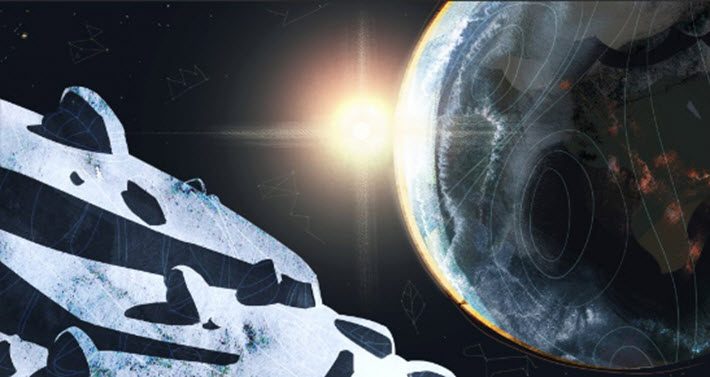 From Samsung’s Bedtime VR Stories, which include 360-degree swipe functionality in viewing.

“Until now, most developers have chosen Apple to launch their work, and Android users haven’t enjoyed the same level of attention, either in amount or content quality. However, developers prefer Android, and sales figures seem to be driving the creation of moreAndroid apps for children and young adults in 2017.”

“In addition to the unit-sales model, some apps are testing new business models. The most widespread may be a subscription. There also have been efforts to integrate book apps’ content to offer subscriptions, as in the #SAVETHECLASSICS Kickstarter campaign by iClassics Collection.

“We hope to see new initiatives exploring new ways to build user loyalty as well as profitability for creators and developers.”

AppTK.es with which Elisa Yuste works, is an app for teachers, librarians, parents, developers, and publishers. It specializes in evaluating reading and book apps for children and young people, with a particular focus on digital competency in reading. The project is lead by E-Lectra Group, part of Salamanca University.