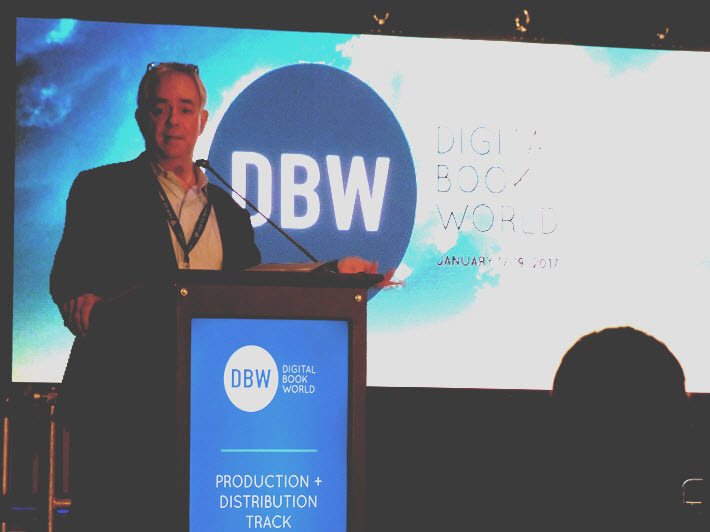 In a quick overview of rights management issues publishers should think about, consultant Bill Rosenblatt looks at a publishers’ handling of content. 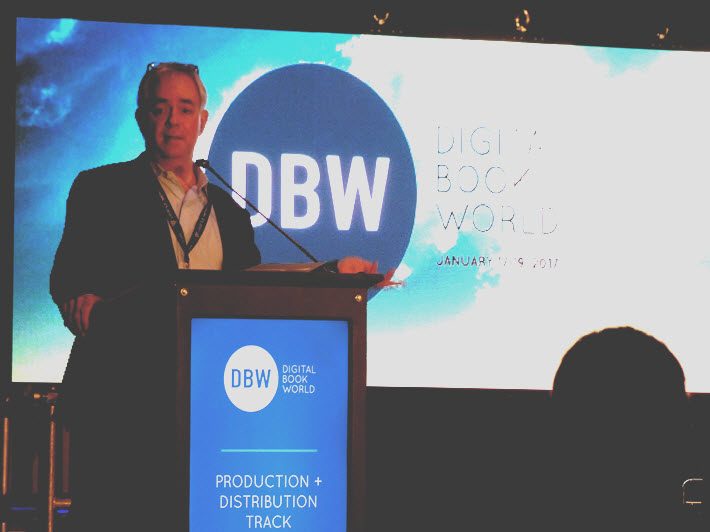 When asking “Does Your Content Know Its Rights?” at the Digital Book World conference on Wednesday (January 18), he was “really talking about the problems that publishers and aggregators and agents and others have in managing information about rights and conducting transactions based on that information.”

is president of New York City-based GiantSteps Media Technology Strategies and gave a short talk on where many publishing and related companies today are running into issues when it comes to using and repurposing content in ways that digital publishing and sales are making available today.

The second day of the DBW industry conference had started with a couple of unusually soft keynotes, one about finding career direction(s) for yourself, and another about productivity in handling your day. While high-level, Rosenblatt’s comments in the early afternoon were welcome for their more business-directed positioning.

As has been increasingly clear on international conference stages in the past year, many publishers are thinking more about how well and how widely they deploy their content, not least because in many cases, book sales are a less predictable source of revenue than in the past.

Early in his remarks, Rosenblatt suggested that he has seen publishers in some cases become interested in rights management only “when they got sued” for a rights infringement. “I call that the ‘Locking the Barn Door After the Horse Is Gone’ syndrome.”

Getting Buy-In From Leadership

Persuading executives to invest in rights management for purposes of greater efficiency or a reduced legal risk may be harder, however, Rosenblatt said, than looking at how such management can improve or scale opportunities for revenue and exposure.

One part of assessing how capable your company is in terms of rights management is doing a gap analysis, starting with what kind of content uses you might like to have in play with your company’s content. Make a wish list. Take an inventory of process and technologies. Find out who is working on rights management, what skills they have, what reporting structure is in place.

“First, assess what you have,” Rosenblatt said, “and ask what could be achieved if you could take the wish list, match it up against your inventory shows” and see where the gaps are.

As an example of where improved rights management can help, Rosenblatt mentioned a nonprofit academic journal that wanted to use some bit of content with proper attribution but at no charge, and the rights holder took three months to green-light the use of that content simply because no process was in place to handle the simple request.

Among companies with good rights management systems in place, Rosenblatt said, is O’Reilly Media with its Safari Books Online. He also mentioned Conde Nast, which has started making its image bank available, but first had to handle the rights agreements needed to do it. “And sports leagues,” Rosenblatt said. “They’ve become wonderful at managing the rights of the franchises for the teams. The images, the audio and video, all that stuff. One reason they’re good at it is that they don’t have that long a legacy structure in dealing with it.”

Rosenblatt said that the best of the sports leagues in this is Major League Baseball. “They’re so good at it,” he said, “that Major League Baseball’s technological infrastructure for content distribution and some aspects of rights management is used by the National Hockey League, and possibly one or two others.”

From the floor, a mention was made of Digital Book World’s parent company, FW Media, and its repurposing of “enthusiast” (hobbyist) verticals to generate new products and revenue.

Before finishing his comments, Rosenblatt also listed four factors to consider in issues of fair use, whether it’s your own material being used or your use of someone else’s content:

It probably goes without saying that your legal department might want to be involved in these considerations.

And, as longtime industry consultant Mike Shatzkin mentioned from the floor during questions and answers, there might be cases in which fair usage has actually increased the value of an underlying property, rather than diminishing it.