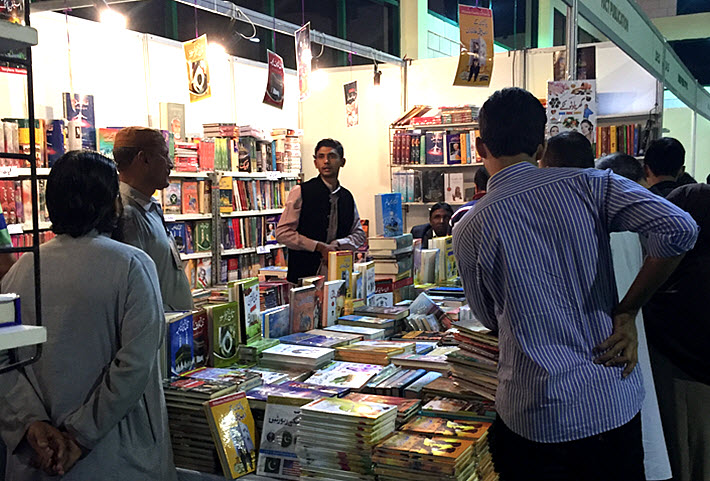 A market with few reliable statistics, Pakistan’s literary leaders work in Western publishing markets and its main play at home is in textbooks. In our series of international market overviews—following Claudia Kaiser’s articles on Myanmar and Vietnam—we hear from her now on Pakistan, unique in many ways, even among emerging markets. As Kaiser points out, the country’s star literary figures operate in other markets. And on the ground, we learn, ‘The publishers and booksellers don’t really want to share their numbers, so we can only guess.’ —Porter Anderson

One of the most striking features of the publishing sector in Pakistan—this country which has witnessed more upheavals than many others—is that many of the country’s literary authors who write in English are well known in the West. But there is very little literary publishing in Pakistan: while literary writers from Pakistan publish in the UK, the US, in India and elsewhere, there’s no dedicated literary publishing house for English language-literature in Pakistan.

Writers including Bapsi Sidhwa, Kamila Shamsie, Muneeza Shamsi, Daniyal Moenuddin, Bilal Tanweer, and Uzma Aslam Khan often have double citizenship. Some of them live in two countries, some spending more time in the West than in Pakistan.

Nevertheless, literary festivals are thriving in Lahore, the center for publishing, as well as in Karachi and in Islamabad. The 2016 Literary Festival in Karachi, an event founded six years ago, drew approximately 200,000 visitors and awarded four literary prizes.

The major book fairs are likewise very well attended. The Karachi International Book Fair hosted 327 exhibitors and 450,000 visitors in five days. In contrast to the literary festivals, the book fairs concentrate almost exclusively on educational publishing, with academic and children’s publishers in the mix.

Very little data is currently available about Pakistan’s book publishing industry. Khalid, Aziz, chair of the Pakistan Publishers and Booksellers Association, says that part of the problem is the key players’ reluctance to expose their business reports.

“We’ve met with so many hurdles and difficulties,” says Aziz, “that we are just now only starting to collect these numbers” on the industry in Pakistan. “The publishers and booksellers don’t really want to share their numbers, so we can only guess.

“Also, although every publisher is supposed to hand in two copies of each title to the National Library—and there’s the ISBN agency, as well—these laws are not enforced and therefore many publishers just don’t bother.”

Ejaz Shah, business development advisor for the Karachi International Book Fair, says that the situation is improving “because of exposure to the major book fairs, and in particular the Frankfurt Book Fair. There seem to be more publishers, and they’re doing good business. A Tale of Two Educational Systems

With its challenged public educational system (only 2.5 percent of the gross domestic product is invested in education and 57.9 percent of the population is illiterate), Pakistan’s private school sector is booming.

There are de-centralized textbook boards for every province that create textbooks for public schools. These textbooks are then edited, laid out, and printed by the publishers. All government schools in a given province use this content, which frequently is of poor quality.

Private schools are more independent. Imports, reprints, and new content are high in demand, but the state school sector is closed to private sector publishers. Most publishers use material from the UK to reprint or model new work, but there are a few publishers who take a different approach. One of them is Rehan Saeed, at Kifayat Publishers, established by his father. With his brother, Saeed is testing educational products from German publishers—Cornelsen Verlag and Oldenbourg—and from Turkey.

Of course, book prices are low and not all Western publishers are keen on the deals, but as turnovers are increasing, Saeed says, it gets more worthwhile. He’s also importing a science kit, and margins on that, he says, are better.

“In the beginning,” Saeed says, “the publishers were not very interested in this market, as print runs and prices are low and piracy is huge. But the market has a good future, with a growing number of quality schools for the middle class, and a population of almost 200 million.”

An interesting player on the scene is the Association for Academic Quality (AFAQ), which not only publishes textbooks but also works in teacher and school-management training and model school development. AFAQ has exhibited in Frankfurt.

Another regular exhibitor in Frankfurt is Paramount, both an online bookseller and a publisher of schoolbooks for private schools. The company also produces locally authored medical books and exports to the Middle East, India, and Africa. Boks account for some 20 percent of Paramount’s annual publications.

Saeed has also made the trip to Frankfurt, along with a cohort of 50 or more Pakistani publishers a year. But Pakistan itself has had a national stand on the trade show floor only once, in 2009.

“We get no support whatsoever from the government,” says the Karachi book fair’s Aziz, “not for a stand in Frankfurt, not for translation funding, nothing. We have to find the money in the private sector. Publishing is the lowest possible priority of the government.”

When asked about the biggest challenges in the Pakistani market, Aziz tells Publishing Perspectives that piracy is the uppermost barrier.

This is something emphasized in 2014 by Ameena Saiyid, managing director of Oxford University Press in Pakistan, when she was interviewed by the International Publishers Association. In that exchange, she said, in part: “The piracy problem [in Pakistan] is colossal. My estimation is that the market of pirated books is bigger than that of genuine books.

“What is most worrying is the mindset: there’s a widespread perception that piracy is justified, indeed necessary, in a poor, Third World country on the grounds that students and readers generally need cheap books, that imported books are exorbitantly priced, and that royalties and profits go out of the country.

“My contention, which I talk about at every forum, is that Pakistani authors are robbed of their royalties and have to seek jobs to supplement their income. This reduces creative output, the government’s tax revenue is reduced, and piracy actually raises the prices of books as it shrinks the market and prevents economies of scale.”

As for other issues for publishing in Pakistan, Aziz lists:

Nevertheless, as the country becomes more stable, the Publishers and Booksellers Association is more active, observers say, and supportive of publishers and measures to curb piracy. It’s also promising that the association is in the process of collecting data on the market in Pakistan. In the future, we should know more.