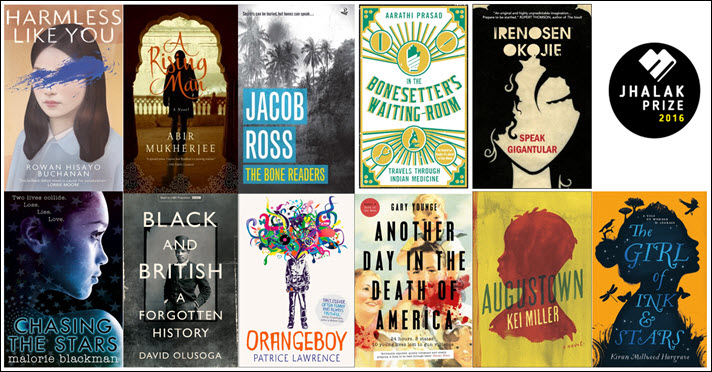 Having started with 12 titles, the Jhalak Prize Book of the Year longlist stands now at 11 books, its intent to honor writers of color in an industry that needs diversity. At Media Diversified, Hanna Zamurd-Butt reports that the Jhalak Prize for Book of the Year by a Writer of Color has released its inaugural longlist.

This is the award founded by the UK’s Nikesh Shukla and Sunny Singh in association with Media Diversified for the purpose of recognizing and celebrating books by British and/or British-resident BAME writers. A winner is to be named at this year’s Bare Lit Festival, which has a similar goal of honoring writers of color.

The 11-title Jhalak longlist covers fiction, YA, nonfiction, debuts and short stories. It includes, as Danuta Kean writes at The Guardian, “a debut novel about inherited identity, a dystopian fantasy from a former children’s laureate, a study of Indian healthcare, and [a] radical history of black Britain.”

The longlist started with 12 titles. Shortly after the announcement was made, author-comedian Shappi Khorsandi withdrew her book, Nina is Not OK, from the list.

As Sian Cain at The Guardian reports, Khorsandi sad that she was “massively flattered” to be longlisted but felt the honor was misplaced:

Because my novel is nothing to do with ethnic identity. Felt like my skin colour was up for an award rather than my book 😜 https://t.co/MQk9JzmkHW

Singh, who chaired the award’s judges, expressed regret at Khorsandi’s decision in talking with Cain.

“The Jhalak longlist was compiled with much enthusiasm, love, and respect for the extraordinary quality and range of work that was submitted. The judges believe that each of the books on the longlist is there on literary merit and deserves as wide a readership as possible.”