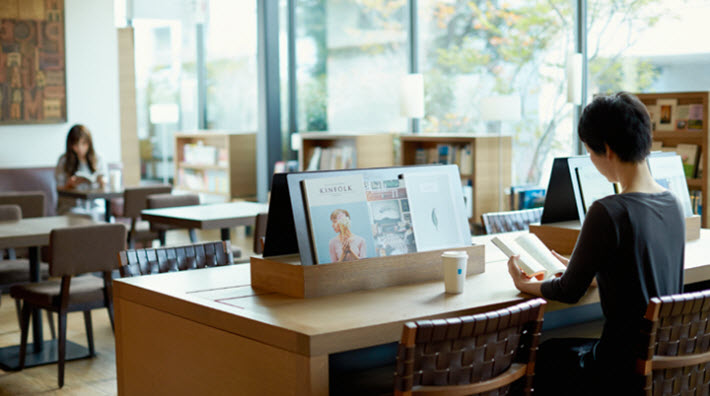 Allowing drinks among the bookshelves, Japanese book retail chain Tsutaya’s concept is meant to extend the amount of time visitors spend at the store. 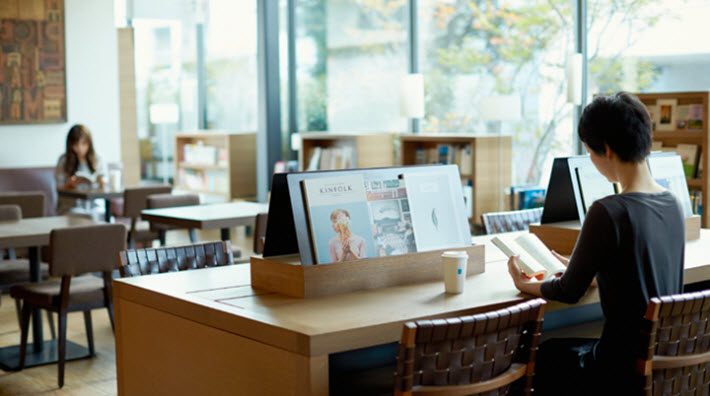 A concept image of the Café Bookstore by Tsutaya from the Culture Convenience Club site.

For ‘a Tasteful 40-Year-Old Man or Woman’

A Kyodo News report in The Japan Times reports that Tsutaya Company, one of Japan’s major entertainment and bookstore chains, opened its first “book café” in Taiwan on Tuesday (January 24).

Located in Taipei’s Xinyi commercial district, the Tsutaya Bookstore is designed to offer a new environment in which people can enjoy books while sipping coffee, company officials say. This is the first time that Tsutaya has opened a book cafe outside of Japan.

The company’s president, Kazuo Nakaishi, speaking on the eve of the bookstore’s opening, is quoted saying that his firm has a goal of opening at least five similar stores in Taiwan in the next three years.

For the new store, Tsutaya has partnered with Taiwan’s CMC Magnetics Corporation and with another Tokyo-based firm, Café Company Inc., whose businesses include building and operating cafés.

Shjuiro Kusomoto, president of Café Company, is quoted saying, “Like the Chinese who chat with their books over tea, we’d like to bond with our Taiwanese friends with coffee in an environment where they can hang out and enjoy a new, leisurely lifestyle.”

“Located across the street from rival Taiwanese book retailer Eslite, the Tsutaya Bookstore has attracted much attention in the local market for its Daikanyama branch’s reputation as ‘one of the most beautiful bookstores in the world,’ as claimed by the online magazine Flavorwire.”

The store offers customers 15,000 books for purchases, with titles in Chinese, Japanese and English. Customers can read their books with beverages from Wired Tokyo, an adjacent coffee shop.

Bob Wong, Chairman of CMC Magnetics, tells Chou that the store’s “selective taste and ‘book and café” theme will allow it to stand out from the competition, and can “provide customers with a comfortable environment to dine, wine, and read books.”

A spokesperson for Tsutaya tells the Post that the store’s open interior design will allow customers to “bring unpurchased books into the café area to read,” while drinks will be allowed in book-sales aisles. The idea is that the arrangement should increase the amount of time customers spend in the store.

Tsutaya’s target customer, the spokesperson says is, “a tasteful 40-year-old man or woman with more leisure time and wealth, so books [being offered] focus particularly on cuisine, traveling, and literature.”

Wong says that the company is “surveying at least a dozen potential locations,” for a second store in Taiwan.

“The long-term goal is to venture into the markets in China and Southeast Asia,” he says.

Full articles are available from The Japan Times and The China Post.