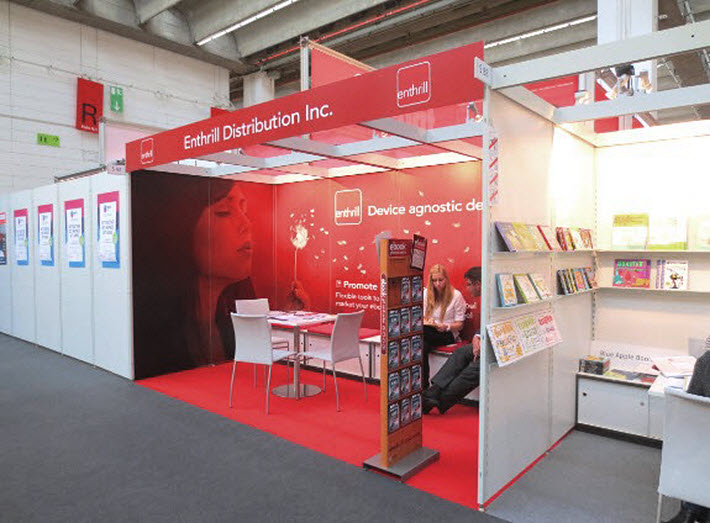 As reported by Publishing Perspectives, Enthrill has been led by Kevin Franco, whose concepts for the company have included in-store gift-cards for ebooks as a way to create digital discoverability and sales for brick-and-mortar retailers. The company’s Endpaper Engine is the delivery system for that program, providing the purchased content to e-reading devices.

Enthrill also introduced a social watermarking program, PackaDRM, for ebooks as an alternative to standard “hard DRM” approaches to digital rights management. PackaDRM carries cordial but pointed messages about appropriate use of copyrighted material, and inserts a subtle tracking code into each ebook. Enthrill then reports to publishers any file-sharing misuse of an ebook detected by the system. In its prepared statement on the acquisition, Firebrand says the agreement “includes PackaDRM, a device-agnostic social DRM, and the Endpaper Engine, an ebook delivery platform that delivers ebooks into any reading device.”

Those elements will join Firebrand’s current offer to customers through Eloquence on Demand, NetGalley, and Direct2Reader.

In a quote provided with the announcement, Franco—who is based in Calgary, Alberta—says, ““Firebrand is the perfect fit for the technology developed at Enthrill, this deal offers a terrific opportunity to expand on the bulk ebook business we created.”

And speaking for Firebrand, CEO and “Chief Igniter” Fran Toolan is quoted, saying, “This addition to our service offering gives us yet another tool to help our publishing partners engage with readers.”

‘No Longer Offered for Purchase’

After initially declining to make a comment, HarperCollins has withdrawn the digital edition of Monica Crowley’s 2012 What the (Bleep) Just Happened?: The Happy Warrior’s Guide to the Great American Comeback from retail outlets. Crowley is Donald Trump’s choice for a communications role in the National Security Council. And while the publisher had no comment originally, it later released a statement to KFile reading: “The book, which has reached the end of its natural sales cycle, will no longer be offered for purchase until such time as the author has the opportunity to source and revise the material.”

When Sarah Weinman at Publishers Lunch reported the story on January 8, she checked sales statistics on the Crowley title and wrote, “While the book did make some bestseller lists right after publication in 2012, Nielsen BookScan shows total lifetime hardcover sales of under 21,000 print units.”

Weinman also took care to note that the paperpack edition of the book was published by Harper’s Broadside Books imprint (which had published the hardcover) in 2013 with a slightly amended title: What the (Bleep) Just Happened…Again? although, wrote Weinman, “Harper did not address questions as to whether the revisions were to keep up with the 2012 election results, as was announced at the time, or to quietly address any known plagiarism issues at the time.”

Of interest to many in publishing has been the Trump administration transition team response, which places emphasis on the Big Five publisher’s status in the industry. The statement is carried by the New York University Arthur L. Carter Journalism Insitute’s PressThink site in an article, Plagiarism charges against Monica Crowley put her publishing house on stage:

“Monica’s exceptional insight and thoughtful work on how to turn this country around is exactly why she will be serving in the Administration. HarperCollins — one of the largest and most respected publishers in the world — published her book which has become a national best-seller. Any attempt to discredit Monica is nothing more than a politically motivated attack that seeks to distract from the real issues facing this country.”

In her article on the case, The New York Times‘ Alexandra Alter makes the point that in today’s publishing industry, authors have recovered after instances of plagiarism:

“These types of offenses once signified the end of an author’s career. But publishers have seemed more willing to give writers a second chance. Last year, Simon & Schuster published a book by Jonah Lehrer, whose previous books for Houghton Mifflin Harcourt were recalled after it was revealed that Mr. Lehrer had plagiarized passages, recycled his own work and fabricated quotations. James Frey, who fabricated portions of his memoir, A Million Little Pieces, about his drug addiction, made a comeback as a young-adult novelist and publisher.”

The original CNN KFile report carries side-by-side comparisons of allegedly plagiarized passages and sources on which the news network asserts those passages are based.