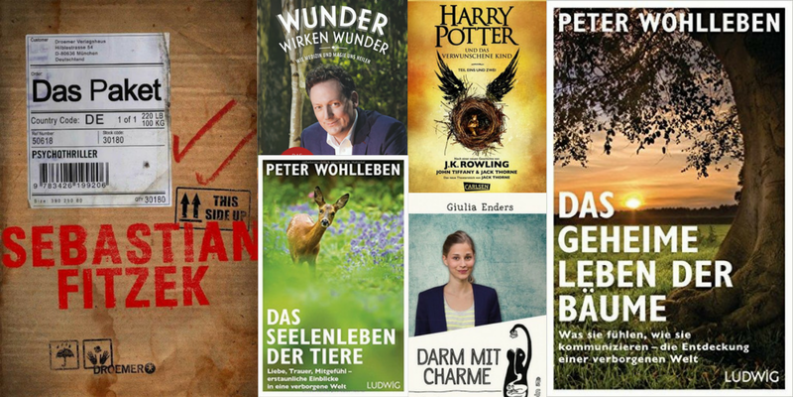 From crime fiction to medical advice with a sense of humor, both well-known authors and new voices were among the bestselling books in Germany last year. 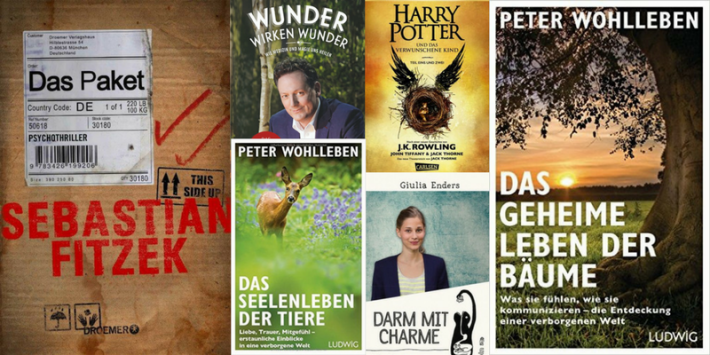 In a review of 2016, German trade magazine Börsenblatt has counted the year’s 25 bestselling titles in fiction and nonfiction. Data for the list came from market research firm GfK (Gesellschaft für Konsumforschung).

Fiction: A Big Year for Translation and Crime 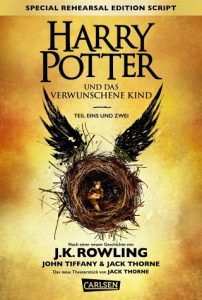 Of the top 25 fiction bestsellers, 11 titles were translations from other languages and 12 fall into the category of crime/mystery. Big publishers also made a good showing on the list. Holtzbrinck has seven titles and Random House Germany had five titles.

2016 was another big year for J.K. Rowling—both in English and German. The German edition of Harry Potter and the Cursed Child (published by Carlsen in September 2016) easily made first place with more than one million copies being distributed to the bookstores. Readers who just couldn’t wait for the German translation pushed the English edition of Cursed Child (published by Little, Brown Book Group in July 2016) up to third place.

Wedged in between at second place is bestselling German crime author Sebastian Fitzek with Das Paket (The Package, published by Droemer in October 2016). His latest book managed to make this list within just two months of being published. He had two books on the 2015 bestseller list. 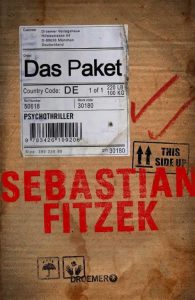 Fitzek has been on the bestseller lists ever since his first book, Die Therapie (Therapy), made it to number one in 2006—above Dan Brown’s The Da Vinci Code that year. Börsenblatt reports that, as of December 2016, Fitzek had sold a total of 8 million books over the span of his career as a writer.

Three books on this list also made the 2015 list: Ein ganz neues Leben (Me Before You) by Jojo Moyes; Girl on the Train by Paula Hawkins; Sean Brummel: Einen Scheiß muss ich by Tommy Jaud.

Other highlights from the list: Suhrkamp’s German translation of Elena Ferrante’s My Brilliant Friend (published in August 2016) with some 400,000 copies sold; and German-Swiss author’s Vom Ende der Einsamkeit (published by Diogenes in February 2016) which sold some 150,000 copies.

Here are the top ten fiction bestsellers of 2016: 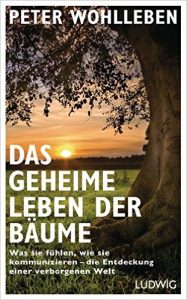 The nonfiction star in Germany right now is undoubtedly forest ranger Peter Wohlleben, who has two titles on the list.

In first place, Wohlleben’s Das geheime Leben der Bäume (The Hidden Life of Trees) has been a regular on the bestseller lists since it was published by Random House Germany imprint Ludwig in May 2015. It was number two on the bestseller list of 2015. So far, translation rights have been sold to 33 countries.

The San Francisco Chronicle called it “the most important environmental book of the year.” The book is about the unexpected and hidden ways that trees communicate with each other, and the influence that one tree in a forest has on its neighbors.

Wohlleben’s follow-up book, The Spiritual Life of Animals, was published in June 2016 by Ludwig and also appeared on the top 25 list in fifth place. Rights have been sold to 21 countries so far, and

The second book on this list, Gut by Giulia Enders (Darm mit charme, published by Ullstein in November 2014), was a surprise bestseller in 2014 and has continued to lead the sales charts. It was the number one nonfiction bestseller in 2015. Enders’ book has been in the bestseller lists for an incredible 74 weeks and has sold more than 2.1 million copies. 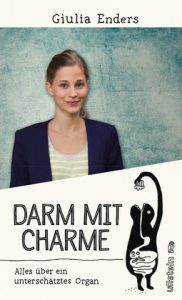 Written in accessible and entertaining language, this book is all about the human digestive system and how it can influence a person’s overall health, from autoimmune diseases to depression and more.

Shooting up to third place within just three months of being published, physician and comedian Eckart von Hirschhausen’s book Miracles Making Miracles: How Medicine and Magic Heal Us (Rowohlt, October 2016) explores the opposing forces of medicine and alternative healing.

This year’s nonfiction bestseller list is driven by new titles. Sixty percent of titles on the top 25 list were published in 2016. However, there are fewer translations on this list—just 5 out of 25.

Five titles from this year’s list also appeared in the top 25 in 2015: Darm mit Charme by Giulia Enders; Das geheime Leben der Bäume by Peter Wohlleben; Der Kämpfer im Vatikan by Andreas Englisch; Wer den Wind sät by Michael Lüders; and What if? Was wäre wenn? by Randall Munroe. This is in addition to the two regular bestsellers on the nonfiction list: the Guinness Book of World Records and Duden (an annually updated dictionary and guide to German spelling and grammar).

Here are the top ten nonfiction bestsellers of 2016:

The bi-annual rights guide to German literature, New Books in German (NBG), has chosen to feature two titles that appear on this year’s bestseller list: Vom Ende der Einsamkeit by Benedict Wells and Unterleuten by Juli Zeh. These two titles are guaranteed translation funding from NBG.

Additional translation funding is available from various organizations for other titles written in German.