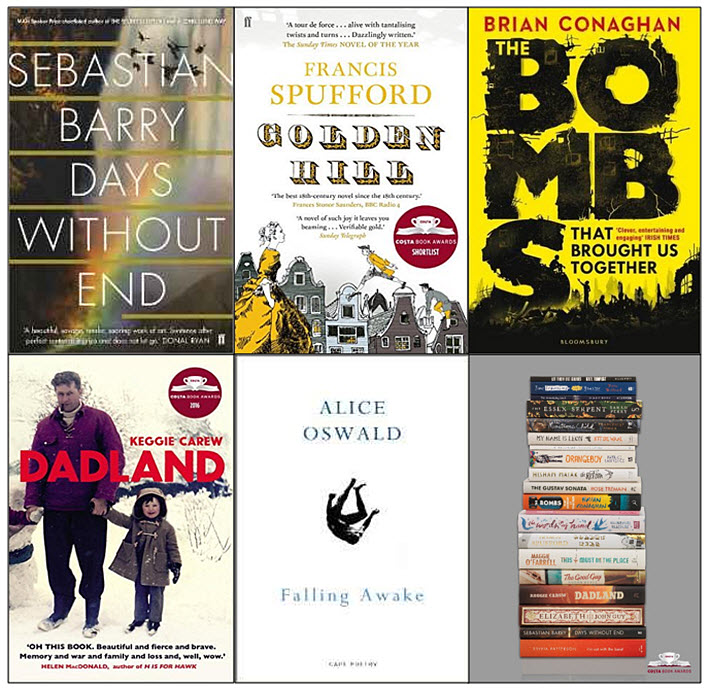 Ireland’s Sebastian Barry, already a two-time Costa winner, may be on track again for the program’s Book of the Year at the end of the month. ‘A Collection of Terrific Books’

As a staff report at the Irish Examiner points out, the Irish novelist and playwright Sebastian Barry has won the Costa Novel Award for the second time—in this case for his book Days Without End (Faber & Faber).

Barry’s novel, set against the American Indian and Civil wars, is called by the judges a “miracle of a book, both epic and intimate, that manages to create spaces for love and safety in the noise and chaos of history.”

Francis Spufford, whose work is mainly focused in nonfiction, has won the First Novel Award for Golden Hill (Faber & Faber). Spufford’s novel, set in New York during the winter of 1745, is described by the judges as “a captivating and dazzlingly original tale that heralds a bold, invigorating voice in fiction.”

Keggie Crew won the Costa Biography Award for Dadland (Chattus & Windus), her first work of nonfiction, of which the judges say, “We all adored this hilarious and heartbreaking book–you’ll be so glad you read it.”

The Costa Poetry Award went to Alice Oswald for Falling Awake (Jonathan Cape Poetry), a collection of poems meant to be read aloud, of which the judges write, “We were all in awe of this book. Please read it.”

Brian Conaghan received the Costa Children’s Book Award for The Bombs That Brought Us Together (Bloomsbury), which the judges say is “Tender yet also hilariously funny…a necessary take on modern life in extraordinary circumstances.”

At The Guardian Danuta Kean writes that Conaghan “offers hope to unpublished writers with piles of rejection slips from literary agents and publishers, having received more than 200 refusals for his debut The Boy Who Made it Rain, which was published in 2011. His next book, When Mr Dog Bites, was shortlisted for the Carnegie medal”

Barry, who won Book of the Year in 2008 for The Secret Scripture is currently the bookies’ favorite to win it again, which would make him the first novelist to receive the accolade twice. Barry tells BBC News: “As a writer, it’s one of the definitions of lovely news. A bunch of people alive in your time have got together and decided they want to do something outrageously kind, which is to give you a prize.”

The managing director of Costa, Dominic Paul, is quoted, saying of the category award recipients:, “We’ve very proud and excited to be announcing this year’s Costa Award Winners, a collection of terrific books.”

The winner of the Book of the Year honor will be announced at a ceremony in London on January 31.

The Costa awards honor books written by authors based in the UK and Ireland. Launched in 1971 as the Whitbread Literary Awards, they became the Whitbread Book Awards in 1985, with Costa taking over in 2006.

You can see a PDF with more about each Costa Book Awards category winner here.