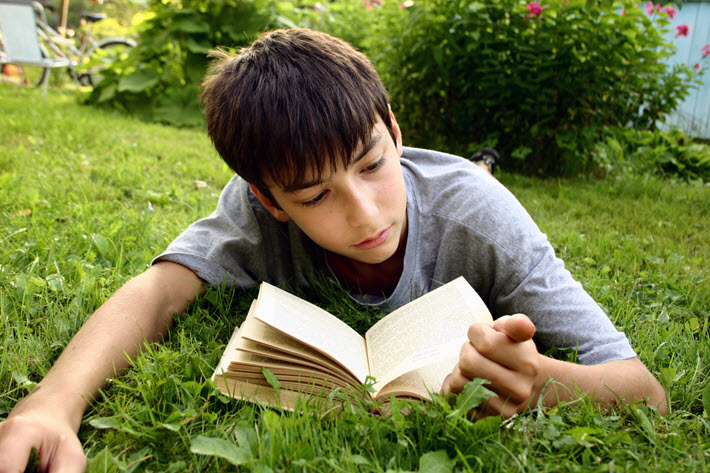 In a demonstration of how consumer research can focus on a demographic, Nielsen Book’s Jo Henry reveals signs that boys 9 to 12 are reading more—and how to enhance sales. 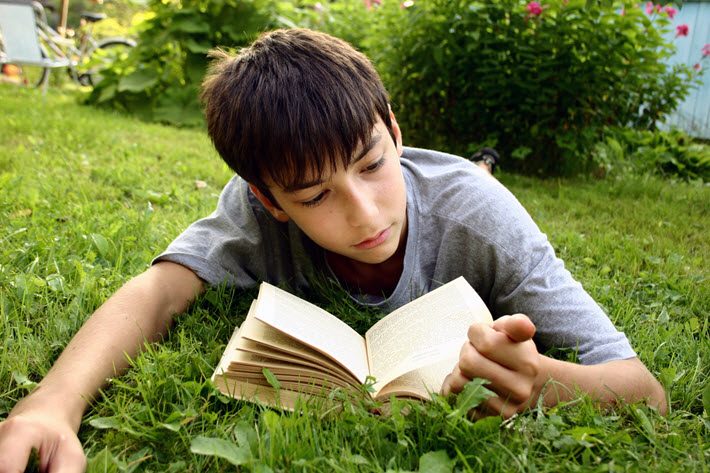 When Kids Ask for Books

In a presentation at last week’s Digital Book World conference in New York, Nielsen Book vice president for insight and analytics Jo Henry brought to light some data that may cheer those worried that boys don’t read as much as girls. 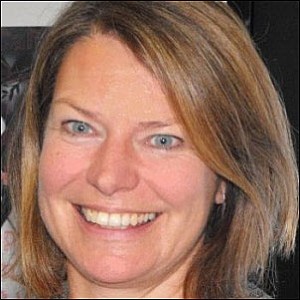 Henry’s presentation shared the stage with HarperCollins‘ senior director of audience development and insight, Jim Hanas, and was titled From Consumer Data to Consumer Insight. Henry’s example of what Nielsen’s research is showing about one section of the children’s market was instructive and hopeful for an industry that has expanded its content output levels far faster than its readership has grown.

Drawing from its monthly surveys of between 4,500 and 6,000 US book buyers and other metrics, Henry and her colleagues have detected a change between 2010 and 2016 in who children’s books are being bought for. As the overall children’s market rises by a handsome 22 percent over those years, there’s an increase in market share among children’s book recipients who are boys between the ages of 9 and 12.

It’s “a steady climb,” Henry says, in the market share of purchases for these boys, with some growth visible for boys 13 and older, too.

“Because in-store display is so influential, working closely with booksellers is important. So is TV, and not just advertising but also author appearances and mentions of the book or series.”Jo Henry

“Broadly,” Henry says, “the key categories for boys 9 to 12 are series/chapter books and picture/activity formats—and more so than for girls—accounting for some 51 percent of all purchases” for the boys. YA fiction, by contrast, she says, isn’t (as yet) showing up as being so important.

Within the fiction category, Nielsen’s data indicates that boys aged 9 to 12 are reading more action/adventure/mystery genre books than girls of the same ages, and more fantasy/magic/myth/science-fiction/horror.

By adding the two wide genre areas, Henry can see “a good chunk” of the boys’ reading, some 38 percent of their content, by comparison to about 31 percent for girls of the same ages.

“Our children’s ‘deep-dive’ research from last autumn,” which is not reported in this presentation, Henry says, “showed that over 50 percent of 9- to 12-year-olds said that more interesting books would encourage them to read more. So there’s certainly an appetite for more publishing for this demographic.” 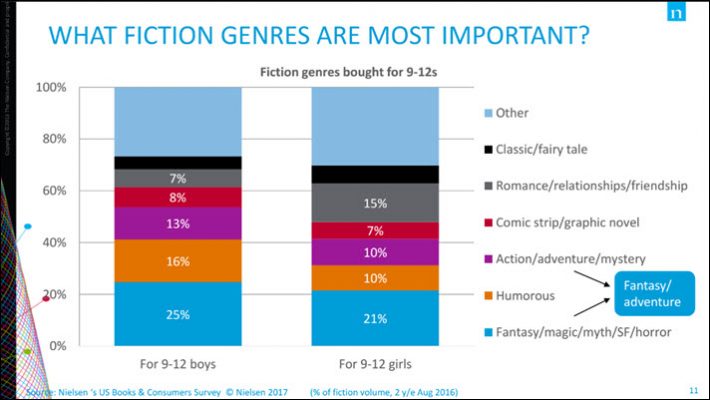 And where publishing’s marketing people might want to take an especially careful look at the kind of consumer research Henry is bringing forward is in who’s “influencing,” as researchers put it, these purchases for boys 9 to 12 years of age.

Traditionally, children’s book specialists understand that they’re marketing to parents. What Nielsen’s stats indicate, however, is that in many cases in this group of adventure-and-fantasy readers, the boys are asking for these books, themselves. This appears to be, in fact, the most prevalent influence on these purchases, particularly in gift occasions.

But the larger proportion of these purchases are being made for “no special occasion,” which, as Henry says to Publishing Perspectives, is “encouraging because I think that they’re not all unwanted Christmas gifts that someone felt that boy should read—and because the child himself has asked for the book.

“You’re not primarily aiming at the December holiday season. The marketing and publicity for relevant authors needs to be spread throughout the year.”Jo Henry

“Importantly, you’re not primarily aiming at the December holiday season” here, Henry says. “The marketing and publicity for relevant authors needs to be spread throughout the year. And the publishing program doesn’t need to be tied to key holiday buying periods.”

The leading discovery methods appear to Nielsen’s researchers to be similar to those for many adult shoppers: in-store displays. There’s also an emphasis on television, however.

“Because in-store display is so influential,” Henry says, “working closely with the gatekeepers—booksellers—is going to be important.  So is TV, and much more so than for books bought for children generally, which here will mean not just advertising but also author appearances and mentions of the book or series.”

Note that stress on series. As with many parts of the adult readership, serialization can be a key to attracting loyal consumers.

“It’s important,” Henry says, “to plan series publishing in fantasy and adventure aimed at boys 9 to 12, in order to make choice and purchasing as seamless as possible, and to tap into schools to try to harness that all-important word-of-mouth among the children themselves.”

What’s more, because purchases here are driven by recipient request—boys asking for the books from parents—”establishing a strong character and/or author identity needs to be a key factor in any publishing in this area,” Henry says. Bonding, in other words. 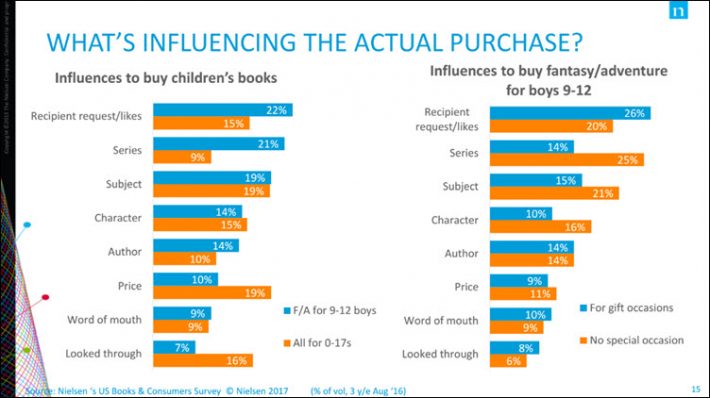 Influence the Boys, Not Just the Parents

One of the key takeaways, then, from this area of Henry’s research presentation is that, in the case of boys in this age group, publishers may want to think of influencing the child as well as parents. If the trigger for a book purchase is a boy asking Dad or Mom for a given book, then catching that boy’s attention with an in-store display or with TV presence and series publishing may be the most direct ways to influence the influencers, the readers themselves.

Henry’s presentation went on to look at another area of book buying, the “grip lit” fans of thrillers and suspense, describing them as “young digerati” in “fashionable neighborhoods on the urban fringe.”

Such actionable uses of data for marketing concepts and execution, of course, can be of very practical help to publishers and authors looking to accurately segment and target the audience for their content.

The observations being made in the children’s book sector on 9-to-12-year-old boys’ reading and purchases, however, holds out more than a marketing insight.

If boys are reading more than they have in the past, this is good news for an industry that long has seen young male readers wooed away from reading by video, gaming, TV, film, and other entertainments during their teen years. Adventure and fantasy reading may answer the storytelling context in which these boys’ entertainment interests and reading best intersect.