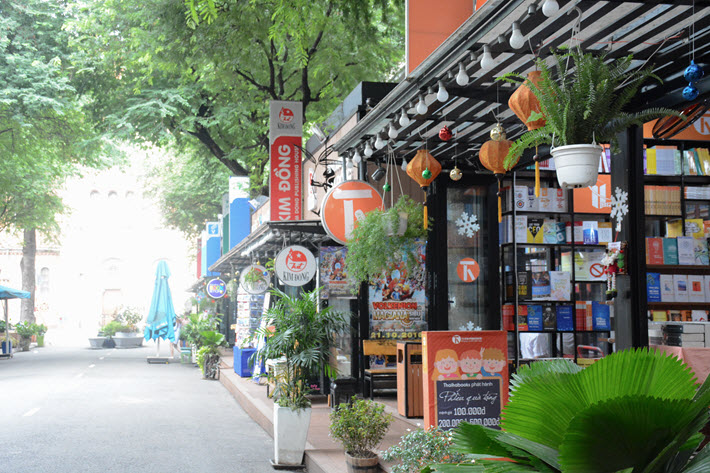 ‘We talked to the government in the biggest cities,’ says Vietnamese publisher Hung Nguyen Manh. And with publishers’ collaboration, his country’s ‘book streets’ are roads to new readership. In our report on the longlist announced for the 2017 International Dublin Literary Award, it was noted that Vietnamese author Viet Thanh Nguyen’s Pulitzer-winning ‘The Sympathizer’ is part of the pool. Frankfurt Book Fair vice-president Claudia Kaiser follows up on her recent report from Myanmar with a look at Vietnam’s emerging publishing scene, which features the development of urban “book streets” as part of its readership development efforts. —Porter Anderson

‘We Wanted a Street Dedicated to Books’

Hung Nguyen Manh is a man of many skills. He’s a Vietnamese citizen who was educated in Russia with a degree in economics. He has worked in trade and in IT. He’s a Buddhist, a teacher of meditation, and an instructor of graduate-level business students. He’s fluent in English, French, and Russian as well as in Vietnamese.

And in 2007, Hung decided that Vietnam needs more knowledge and wisdom.

He founded Thái Hà Books, a private publishing house focused on education and “meaningful” books. The publisher’s mission is to serve, and to contribute to the cultivation of Vietnamese society.

Private publishing in Vietnam has been allowed only since 2004 when Vietnam became a signatory of the Berne Convention for the Protection of Literary and Artistic Works. Before that, only state-owned publishing houses were allowed to publish books, and there are now 60 of them.

“We now have a Book Street. It has only bookshops and events all year long. Hanoi is expected to follow suit soon.”Hung Nguyen Manh

Still, Publishing Perspectives has learned that there now are more private publishing and bookselling companies than state-run counterparts in Vietnam. More than 100 private companies are in operation, and they’re allowed to participate in the country’s Publishers and Printers Association, as well.

At major bookselling fairs in Hanoi and Ho Chi Minh City, private publishing houses have big stalls and many events. These fairs, like those in many other countries, are popular outings for the local public, many set outdoors, in parks.

Hung is in charge of international affairs at the Publishers and Printers Association. And as an advocate of reading and its promotion, he was a driving force behind the development of what’s known as “Book Streets.” “We wanted a street in the downtown area dedicated to books,” Hung tells Publishing Perspectives.

“And so we talked to the government in the biggest cities, Hanoi and Ho Chi Minh City—which still is sometimes referred to as Saigon—as well as to the publishers. Each publisher was asked to invest financially to the project.

“So in Saigon, we now have a Book Street. It has only bookshops and events all year long. Hanoi is expected to follow suit soon. It’s a great achievement for Vietnam.”

When Ho Chi Minh City’s Book Street opened on Nguyen Van Binh in District a year ago, the country’s English-language newspaper, Viet Nam News, headlined its story, Readers Rejoice on City’s Pedestrian-Only Book Street. The cost, as reported by the paper, was 9.4 billion Vietnamese dongs, or US$414,000.

At the time of the opening, Nguyen Thi Thu, vice-chair of the city development committee for the project, was quoted by the paper, saying, “The Ho Chi Minh City Book Street is a place for readers and authors to meet and exchange. It also promotes the reading habit and encourages cultural agencies and organizations to focus on developing the habit among youth.”

A book day is planned for April 21, and Hung says approval has been granted for a project aimed at promoting the reading habit in concert with the ministry of culture, sport and tourism. The over-arching goal, he says, is to see regular readership increase to 65 percent of the population by 2020 from a current level of about 30 percent.

Certainly among book fair attendees, reading is quite popular. The younger population of Vietnam is extremely internet-savvy. Facebook and online gaming dominate in the country, but Twitter, Instagram, and Snapchat are less successful. Reading has yet to gain a dependable foothold among younger Vietnamese citizens.

Prior to the July 1976 reunification of North and South Vietnam, only some 4,000 titles were published annually. That number had risen to 20,000 titles in 2010 and to some 26,000 in the most recently available figures, for 2014. But 80 percent of these books are reported to be textbooks. There’s a strong interest among Vietnamese readers in translated books. While reliable figures aren’t available, estimates are that some 70 percent of non-textbook titles are translations from other languages. That also indicates that there isn’t a large number of Vietnamese writers being published in their home country. It’s said, however, that there’s a strong author community developing and that it includes some interest in self-publishing. Among the roughly 5 million Vietnamese who have settled outside of the country, however—representing some 5 percent of the overall population of about 100 million—there are several writers who have achieved international recognition. One is Viet Thanh Nguyen, who won the 2016 Pulitzer prize for his first novel The Sympathizer (which is also on the 2017 longlist for the International Dublin Literary Award). Two more are Andrew Lam and Aimee Phan. All three live in the US.

One of Vietnam’s best known authors, Bao Ninh (The Sorrow of War), still lives in Hanoi.

While the country is a signatory not only of Berne but also of the Agreement on Trade-Related Aspects of Intellectual Property Rights, or TRIPS, copyright infringement reportedly remains a key problem. As the company’s cultural work becomes better known internationally, it’s hoped that more enforcement of copyright protection will be forthcoming.

In 2016, Vietnam demonstrated diversity in its publishing scene at Frankfurt Book Fair. The City of Hanoi showed books and the stand was staffed by Vietnamese representatives. The country’s publishing community is active in the ASEAN Book Publishers Association and is contemplating a Guest of Honor presentation in Frankfurt.