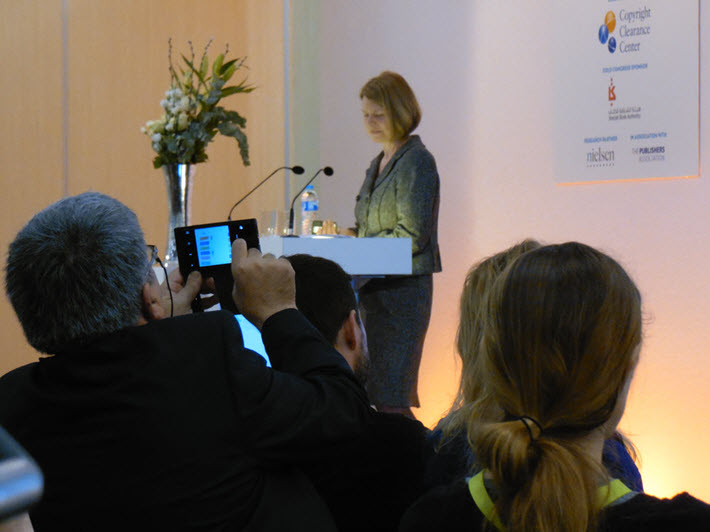 The London Book Fair’s Quantum Conference and Nielsen’s BookInsights merge, while the Authors Guild and Media Coalition get together on freedom of speech. Nielsen’s Jo Henry speaks in the 2016 Quantum Conference at Olympia London. In 2017, Nielsen Book and London Book Fair join forces for Quantum: Consumer Insights and So Much More on March 13. Image: Porter Anderson

‘Fresh Off the Press’

London Book Fair—which is early this year, March 14-16—has announced that its Quantum Conference on March 13 will be combined with Nielsen Book‘s highly regarded BookInsights Conference.

The new full title of the conference becomes “Quantum: Consumer Insights and So Much More.” (Last year, its subtitle was “Publishing and So Much More”.) Director Orna O’Brien and her staff promise “actionable insights” based in Nielsen research and “forward-thinking on the book industry all in one place.” Damian Horner, who is brand development director with Hachette Book Group, is to serve as host for the event at which Nielsen research director, Steve Bohme, is to present trends in consumer behavior from Nielsen’s Books and Consumers data survey.

In a prepared statement, London Book Fair’s director, Jacks Thomas, is quoted, saying, “As the book industry responds to changing patterns of consumer behavior, innovation in publishing continues to be exciting and challenging. With millennials, Generation X and Boomers “With millennials, Generation X and Boomers all jostling for attention, understanding what consumers want and how they access content is more important than ever before. Taking our collaboration with Nielsen Book a step further couldn’t be timelier and Quantum attendees will have a preview of the most up-to-date industry research available from around the world.”

And speaking for Nielsen Book, the company’s SVP and global managing director, Jonathan Stolper, is quoted, saying, “We are delighted to be working with the London Book Fair to present our ’fresh off the press’ Books and Consumers data from the 2016 survey and so much more. “It’s exciting to be working together on a program that will enable publishers and retailers to gain insights on how the market is performing as well as identify key trends that will inform business decisions now and in the future.

“We’ll also take a look at the global market and provide insights and market data that publishers and retailers worldwide can use.”

Copyright Clearance Center will again sponsor the conference in 2017.

In what will be read as a sign of the political times, the New York-based Authors Guild has joined The Media Coalition, a nonprofit First Amendment rights organization.

This won’t surprise regular readers of Guild commentary. Its November 11 article What the Trump Presidency Could Mean for Authors was one of the first essays to address the subject directly after the US election. Then, it rated freedom of speech as its first listed concern in the Trumpian age and wrote, “Expect to see an uptick in our advocacy in this area. Some of our sister organizations, such as PEN America and the National Coalition Against Censorship, focus primarily on freedom of expression, and, while supporting their efforts, we have let them do much of the heavy lifting on these issues. But if any of Trump’s threats against journalists’ freedom of expression materialize, directly challenging such threats will become a core part of our work in fulfillment of our 100-year old mission.”

Now, in an article from Friday (December 2), the Guild’s staff writes, “Since the Guild will be focusing on issues of freedom and diversity of expression in the coming year, our Coalition membership should prove timely and invigorating.

The Guild describes the core work of the Coalition this way: “The Coalition, founded in 1973, looks to provide a unified voice for all stakeholders whose work depends upon First Amendment protections. It advises legislatures on pending legislation, files legal challenges and amicus briefs, and advocates publicly for preserving free speech.”

The writeup concludes: “Facing what appears to be an increasingly hostile environment, it will be important for authors, publishers, and distributors of all types of media to vigorously protect their First Amendment rights.

“The Guild looks forward to being a part of the Media Coalition as we continue to protect freedom of expression for our members and authors everywhere.”

The Guild’s article on its membership in The Media Coalition is here.