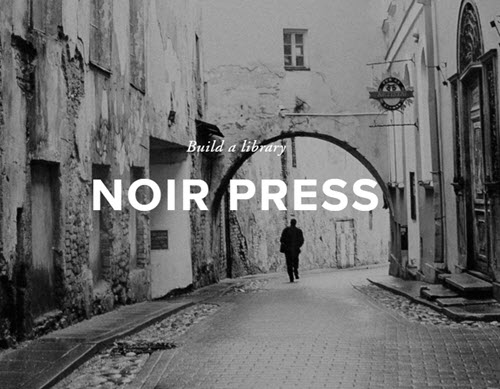 ‘Does a Lithuanian author stand a chance in the ocean of books on British bookshop shelves?’ Noir Press’ Stephan Collishaw says he has a good answer. Laura Sintija Černiauskaitė is the Vilnius-born, 39-year-old author who won the 2009 European Union Prize for Literature for her ‘Kvėpavimas į marmurą’, calling it “a well-crafted drama about painful solitude, family, and relationships between men and women. Černiauskaitė writes about yearning, about unused intimacy, about the gentleness and burdens of the heart, about life, about something from below and something from above.” It’s good to see the book in an English translation, and we hope that final cover art will include the name of the translator, Marija Marcinkute. —Porter Anderson The Noir Press edition of Breathing Into Marble is translated by Marija Marcinkute.

Stephan Collishaw, a British novelist and editor who established Noir Press this year, talks with The Baltic Times’ Linas Jegelevicius about his plans to help introduce new Lithuanian literature to an English reading audience.

In the article, Grabbing Britons’ Attention for Lithuanian Fiction Is Now Easier than Ever, he says that “currently Lithuanian literature is unexplored territory for the English reader. It is terra incognita.”

Collishaw hopes to change all that with the publication of the Lithuanian novel Breathing into Marble (Kvėpavimas į marmurą) by Lithuanian novelist Laura Sintija Černiauskaitė, out this week.

Some highlights of the interview at The Baltic Times: Stephan Collishaw: Indeed, there are some other Lithuanian novelists like Jurga Ivanauskaite, Ricardas Gavelis, and Jurgis Kuncinas whose works are available in English and generating some interest, but all these writers are dead…The early millennium was obviously not a good time for Lithuanian literature…

I’m really keen to see some dialogue between contemporary Lithuanian literature and the English-speaking world, and that is what Noir Press is attempting to do.

The mission of the press is to publish over the next three years 10 contemporary novels as a showcase of what contemporary Lithuanian fiction looks like. Breathing into Marble is an excellent place to start…the kind of novel I enjoy reading. It is dark, poetic with a really interesting central character.

LJ: How do you make your book stand out in that crowd? SC: I believe that there is a real opportunity to develop an interest in Lithuanian fiction, perhaps now more than ever. Little is known about Lithuania or its writers, so there is a genuine interest as to what writing is being produced in the country. Unfortunately the geopolitical state of the world has once more thrown the Baltic States into the international limelight, and news coverage of the tiny Baltic countries internationally has never been greater.

I also think that there has been a change in the literary style in Lithuanian writing. It is more diffuse than before and is not as political as it has been previously.

For a reader outside the country, that is useful.

You can read Linas Jegelevicius’ full interview with Stephan Collishaw at The Baltic Times here.