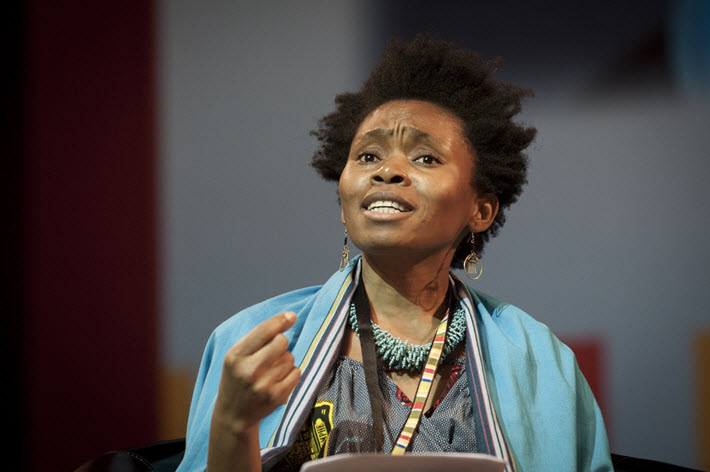 Having watched Cassava Republic Press grow for a decade, Bibi Bakare-Yusuf is focused on getting books into the hands of readers through international partnerships. The independent publishing house Cassava Republic Press in Abuja was established in 2006 to challenge perceptions of African writing. Today, the company has an office and bookshop in London to promote its writers in the West.

In its 10th anniversary year, Publishing Perspectives has spoken with Cassava’s founding publisher, Bibi Bakare-Yusuf, to talk about present and future issues in African and West African publishing, and to learn more about Cassava Republic.

Publishing Perspectives: Can you start by telling us what need you were responding to when you founded Cassava Republic Press?

Bibi Bakare-Yusuf: I remember a trip to Nigeria when I ended up in the bookshop of the University of Lagos. The paucity of books there and in many of the homes I visited broke my heart. That was a turning point and the beginning of an idea.

We wanted to provide affordable nutrition—cassava—for the mind and we felt that it is only when the mind has been nourished that citizens can begin to liberate themselves from the constraints of external authority or dogma. This core philosophy is echoed in our name: Cassava and Republic.

Although I had an academic background, I had no experience with entrepreneurship when I moved to Nigeria in 2003 to set up Cassava Republic Press three years later.

PP: How would you summarize your progress in the last 10 years?

BBY: Well, let’s celebrate ourselves for a moment:

Publishing is essentially a collective endeavor and I will always want to celebrate all the people who make it possible, including the journalists and bloggers who help us to create the buzz. It’s been extremely hard work all along, as is the case for independent publishing all over the world.

In Africa, publishing involves doing everything yourself–there aren’t formal distribution systems. Of course, publishing in the West brings a new set of rigors and demands, given how structured and process-driven the business is. But we’re already known as a new indie publisher in the UK and our brand is growing among our target readership.

PP: How successful has your base been in the UK?

“While many European publishers may be looking to developing economies for expansion, we see Europe as a big opportunity for our growth. There’s a massive African diaspora.”Bibi Bakare-Yusuf

Although success in the UK is too early to assess given that we only launched in April, we’ve had really positive response to our launch titles from the media, fellow publishers who’ve been very supportive with their advice and the readers. All our events have sold out.

PP: And before we go back to some of the basic challenges you’ve faced, let’s look forward a bit: what concerns and opportunities will Cassava Republic Press be faced with now?

BBY: We want to continue to play a strong role in challenging expectations and assumptions about African writing and to put the continent on the global map by publishing some of its extraordinary stories.

We’d like there to be a stronger connection between the titles we publish and other media, such as films and plays. We’d also like to continue to innovate in how books reach our readers. In Nigeria, we want to explore breaking the books into bite-sized formats delivered to mobile phones, partnering with platforms such as OkadaBooks, as well as develop audiobooks that can be downloaded via mobile phones.

The Struggle at Home

PP: Looking back at the flagship in Abuja now, what has been the greatest challenge you’ve faced?

“Getting books to readers who want them in Nigeria and across Africa will continue to be a challenge. We don’t have a reliable formal distribution system as there is in the West and we have very few decent retailers.”Bibi Bakare-Yusuf

Bibi Bakare-Yusuf: Perhaps the biggest challenge of publishing in Nigeria is that it’s close to impossible to find a consistently reliable local printer. After several disastrous experiences, we made the decision to print overseas. Of course, that’s not without its challenges, in terms of dealing with customs at the port, which can suck all the fun out of publishing.

PP: How do you see the market for African literature developing over the next year, both in Africa and in Europe? BBY: Many parts of Africa are suffering from an economic downturn, which will inevitably affect purchasing power and priorities. This is particularly the case with the Nigerian economy, which has suffered greatly from a slump in oil prices. Nigeria will weather the storm and rise again, but this is not likely to be next year.

Despite this, we’ve created a thirst in people to see their stories and worldview reflected in some of the things they consume and we’re hopeful about getting our books beyond Nigeria. We have already started that process with a partnership with Pan Macmillan to distribute our books in Southern Africa.

While many European publishers may be looking to developing economies for expansion, we see Europe as a big opportunity for our growth. There’s a massive African diaspora, both recent and better established. Mainstream Western publishers haven’t targeted this audience, and we want to do that, while finding a broader base, as well. Europe is a diverse continent, its cities are more mixed across racial, ethnic, religious lines. We want to invite all these groups to interact with each other through our books.

Outside of the British Isles, we’re happy that there’s been strong interest in translations of our titles. For instance, Easy Motion Tourist has been very well received in France, with repeated demand for the author to attend crime fiction festivals across the Channel and several interests in the film rights. We think that our presence in the UK will probably encourage more publishers to make their lists more diverse.

Outward Bound: A US Expansion in 2017

PP: In the coming year, what challenges does the publishing industry in Africa face and how easy will it to be to overcome them?

“We’re very excited about possibilities for our authors in the United States—we have a strong support base there already and really look forward to introducing our titles to the market in 2017.”Bibi Bakare-Yusuf

BBY: Getting books to readers who want them in Nigeria and across Africa will continue to be a challenge. We don’t have a reliable formal distribution system as there is in the West and we have very few decent retailers. We’ll continue to have to expend a lot of resources and time getting our books to readers using salaried marketers traveling around the country. The lack of good bookshops to aid discovery and sales is still a problem. These distribution challenges can be overcome by partnering with other non-bookshop outlets with large footfall to consider stocking selected books. We’ve partnered with supermarkets and cafes, and have even sold our books at hairdressers. Quite a large number of books are also sold in traffic in the large cities, but unfortunately there are issues with piracy which make this a difficult distribution system to crack.

Publishers can come together to share warehousing and associated distribution cost.

We’ve been forced to print overseas for many years for a better cost-to-quality ratio. However, the plummeting naira and lack of availability of foreign exchange means it’s now a huge challenge to print overseas. Without government intervention to reduce the cost of electricity, printing in Nigeria will continue to be expensive compared to printing abroad.

With the expansion of mobile phones, promotion of “m-book” sales will become an important part of overcoming the distribution challenges.

Digital innovation is likely to have an even stronger impact across Africa than in the West, simply because of the historic lack of access to books. Education-based initiatives like Worldreader and the mobile book platform OkadaBooks will make an increasing difference in the years to come. Digital innovation is allowing us to build our audience base through social media. And because we have a single platform for markets —Nigeria and the rest of the world–audiences are able to interact, connect and engage each other in a way that they would not have previously done.

PP: Can you share any of Cassava’s future plans with us? Are you planning to set up bases in countries other than the UK?

BBY: Our focus is to strengthen Cassava as a global brand. Over the past year, we’ve established sales and distribution channels in the UK, Europe, and the Middle East, as well as in East and South Africa. We’re planning to launch a list in the US next spring. We’re very excited about possibilities for our authors in the US—we have a strong support base there already and really look forward to introducing our titles to the market in 2017.

We also are commissioning in new areas in which we believe there’s still a dearth of African authors—travel writing, crime, graphic novels. Given the strength of our brand, we also are considering a subscription model, along the lines of Granta.