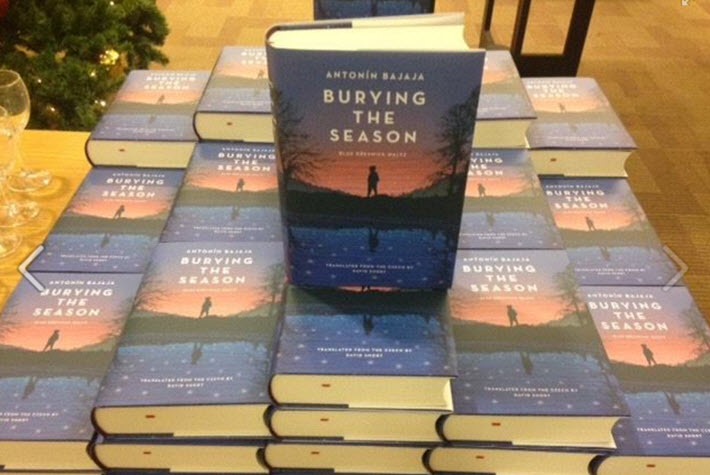 UK-based Jantar Publishing will take a strong step forward in the output of the translated works, mainly from Central and Eastern European authors. From the launch of ‘Burying the Dead.’ Image: Jantar Publiishing on Facebook

At Radio Prague, David Vaughan tells us that publishers who “focus on contemporary writing from Central Europe are few and far between.”

In Michael Tate: bringing us the best of Central European writing, he adds that one of the newest to help bring Czech poetry and prose to a worldwide audience is London-based Jantar Publishing, a goal of which is “to publish a variety of Central and East European works of literature that are in their way ‘trapped in amber’ and awaiting discovery.”

Jantar’s founder, Michael Tate, is interviewed by Vaughan about the launch of Jantar’s latest translation—Burying the Season, by writer and journalist Antonín Bajaja—and about Jantar’s plans and projects.

Some highlights from their exchange, which includes Tate saying that Jantar is now in its sixth year of operation and has as a central aim the effort “to produce very good English translations of literary fiction written in the languages of Central Europe.”

David Vaughan: And how many books have you published so far?

Michael Tate: So far it’s been tiny and the book that we’re just bringing out is our eighth. Next year, suddenly, by an act of magic, we will publish 10.

DV: Let’s come to your latest publication because it’s fresh from the presses. MT: Antonín Bajaja is a gentleman in his 70s. He won the Czech State Prize for Fiction in 2010. He’s relatively well-known as a radio journalist, as a magazine journalist, and latterly as an author of fiction.

His book Burying the Season was published in 2008 and 2009 and with a completely different title in Czech, Na krásné modré Dřevnici, which doesn’t exactly roll off the tongue even in Czech.

DV: And is virtually untranslatable.

MT: That’s just the point. Na krásné modré Dřevnici is quite a nice phrase, but the long and the short of it is that a notional English reader is not going to know what that is.

Jantar Publishing wants to sell books, it wants a catchy title. We ran a competition and Burying the Season was head-and-shoulders above all the other suggestions. I really like it.

DV: It’s a lovely way to choose the title of a translation, by having a competition.

MT: The whole thing was odd, but rather life-affirming. In total 103 people entered. We had suggestions from the US, Canada, Britain, Poland, Denmark, the Netherlands, Australia and of course the Czech Republic, but the ultimate winner was the wonderful Gabriela Oaklandová who just thought of it as the title for one of the sections of the book.

DV: You mentioned that you’ll be expanding considerably in the coming months. What are you planning to publish over the next twelve months? MT: The first book that we’re bringing out next year is a lovely translation from Slovak, by a writer called Vladimír Balla. His book, called In the Name of the Father is a pseudo-gothic horror about building a house on one level, but on another level it’s about what the Slovak state looked like five years after it was created.

We’re bringing out our first Polish novels, as well. I’m particularly excited about a book by Agnieszka Taborska, who wrote a novel called The Unfinished Life of Phoebe Hicks. It’s about the author looking at a picture of a woman from the American Midwest in the 1870s and just imagining what her life was like based on her clothing and the posture. It’s a lovely novella that we’re going to bring out in June next year along with an anthology of Czech contemporary poetry from the 1980s and 1990s.

We also have a very exciting young Polish author called Aleksandra Rychlicka. It’s an amazing book about a literary journey of the son of an unnamed literary author, tracing the steps his father took in pre-Second World War Europe.

But we’re not forgetting other Czech authors. We’re very excited to be publishing a third book by Daniela Hodrová, which is the second in her Prague City of Torment trilogy and we have our first novel in English by the wonderful Petra Hůlová–allegedly her most controversial book, but there are several contenders for that prize. It is called Umělohmotný třípokoj, or Three Plastic Rooms.

You can read Tate’s full interview with Vaughan here.