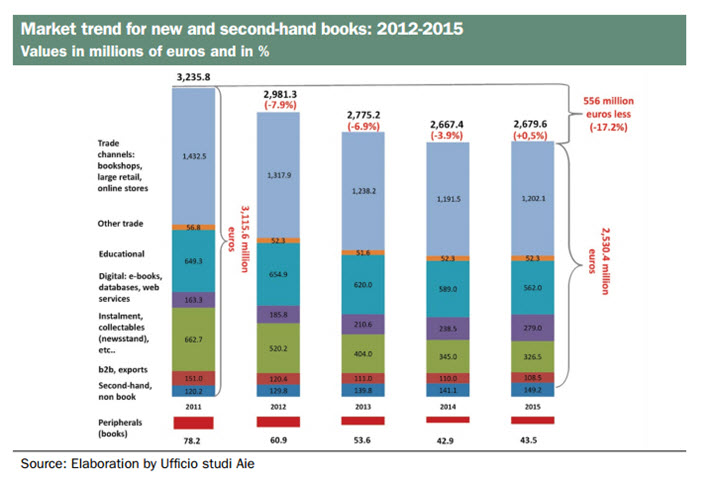 From ‘Report on Publishing in Italy’ 2016

A Market ‘Limited to Its Linguistic Area’

For the first year since 2010, Italian publishing—including books and digital publishing content, miscellaneous, and educational content—saw positive financial returns in 2015 and the first half of 2016. These latest numbers come from a new report released by the Italian Publishers Association (AIE).

Aldus, a network of European book fairs, provides a highlight in English of the report here.

These are key points from the report:

That small percentage of readership growth is important because, as some of the discussion in a 16-page PDF in English, only some 42 percent of Italians—about 24 million people—are understood to be readers. This means that among some of the world’s biggest publishing markets, Italy has what the report terms “the weakest potential.”

And even though digital in Italy still is growing, that growth “continues to be slower than anticipated.” If ebooks and digital products comprise 11 percent of the market, in other words, the €279 million represented by that sector doesn’t yet offset losses in more traditional formats.

Still, this is an upbeat report. From ‘Report on Publishing in Italy’ 2016

What seems to be driving these forward leaning dynamics?

In a candid introduction to the English summation of the report, we read this:

“The fact is that Italian publishing suffers from certain “genetic faults”. First among them is the fact of being the only publishing industry among major western nations which has a market limited to its own linguistic area and one, furthermore, with low levels of readership, given that 58 percent of the population say that they read no books.

“In addition, the level of general literacy is continually below the average for OECD countries. One thing is certain: if we are to talk about recovery, it’s taking place against a competitive background – both domestic and international – which is radically different from that of 2010: new assortments and literary genres; changes equally great in numbers of titles and print runs; commercial spaces and services profoundly re-imagined; customer communications aimed at a more fluid public.”

And no one in the AIE’s work on this report seems to want to overstate the newly reported modest if hopeful growth. “Growth continues in 2016, but remains weak,” some of the text says, with a nod to economic “recovery difficulties for consumers in all sectors.

Echoing the message heard at The FutureBook Conference earlier this month in London, the summary includes a note about digital and analog: “Paper and digital have become simply part of the environment in which the reader/customer exists,” in the Italian market, “not rivals but interchangeable depending on the occasion or needs of the moment.”

And in the end, perhaps as a cautionary message to other international book markets so beset today by competitive and enticing media outside of publishing, this line has resonance: “The low reading index” long observed in the Italian population “represents the main problem for growth in Italian publishing in that it means having a market which is potentially more restricted than that of other comparable European publishing industries.”

The 16-page English discussion of AIE’s report is here.