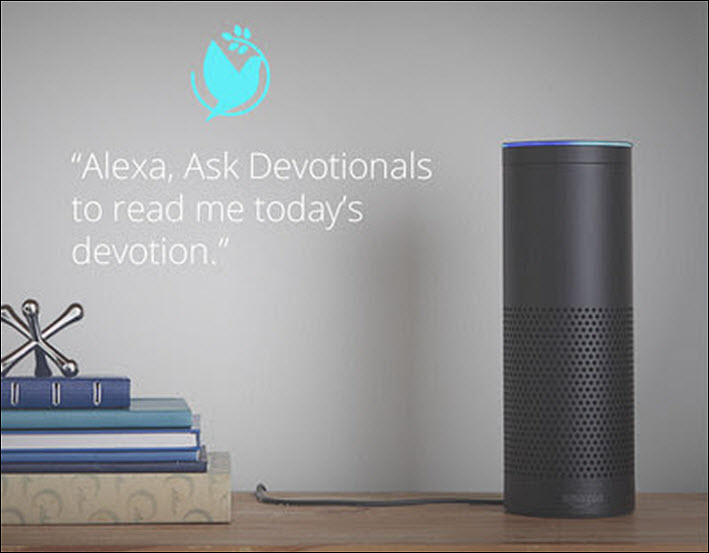 London and New York’s major trade shows have opened registration. And in Christian publishing, a Big Five player teams up with Amazon to offer ‘bite-sized devotionals.’ For Devotees of Alexa

Anyone who has Amazon’s Alexa—the voice-controlled software in the company’s Echo, Echo Dot, and Fire devices—knows you can end up laughing at yourself for being quiet so as not to “disturb Alexa.”

In an interesting development, though, a moment of quiet has become available to users of the system from HarperCollins Christian Publishing: it’s offering what is described as “bite-sized daily devotionals” to those who find such meditational interludes attractive.

Launching Monday (December 12) the devotionals are accessed—as are most of Alexa’s capabilities—by installing a “skill,” in this case a “Devotionals skill,” in the system, much as you’d add an app to a smartphone. Users who have Alexa’s “Flash Briefings” for news and information can, alternatively, have the HarperCollins devotionals added to those briefings.

And HarperCollins is making the point in promotional announcements that it’s “the first book publisher to collaborate with Amazon at this capacity.”

In a prepared statement, Sally Hofmann, senior vice-president for direct-to-customer sales and marketing for HarperCollins Christian is quoted saying, “This is an unprecedented opportunity to gain new exposure and awareness around our authors’ great content, in short form, with a simple voice command.

“Bite-sized devotionals are a strong and engaging way to connect with our authors and uplift readers each day. Through our own Devotionals Daily brand we discovered, via social media, that this format really resonated with our readers.”

The devotional content is drawn from HarperCollins’ Thomas Nelson and Zondervan divisions. Catherine Zappa, director of audio sales for HarperCollins Christian, is quoted saying, “Often it’s our authors’ voices who are actually reading for the audiobook, so it really brings a deeper connection to the listener and the content.  And devotional listeners are able to say, ‘Alexa add,’ the book’s title, ‘to my cart’ and the book will be waiting for them in their Amazon shopping cart.  All the user has to do is select the format.”

HarperCollins’ news release points out that it is the world’s “largest publisher of Christian faith-based devotionals and gift books.” Its devotionals carried by Alexa will be updated daily.

Both major spring publishing trade shows have opened registration within hours of each other.

London Book Fair, set for March 14-16, now has early-bird rates available for its big-ticket conferences and regular admission is open, as well, along with the fair’s “Priority Access” that allows early-morning access for those who need it each day.

The fair again is at Olympia London. For booking information, click here.

In New York, BookExpo—doffing “America” in favor of a more international stance—has opened is registration with a message from the new director of the event, Brien McDonald.

In his message to potential attendees, McDonald writes, “As you know content is being consumed in more dynamic ways than ever before and new methods must be used to engage readers.

“BookExpo is evolving to lead the global publishing industry to its consumer driven future and celebrate storytelling in all its forms. It’s your place to discover emerging authors and the next blockbuster titles, engage with the world’s most influential publishers and learn from industry leaders and peers.”

He reminds us that a shorter BookExpo, May 31-June 2, concludes with the weekend’s two-day BookCon event. And the programming returns this year to New York’s Jacob Javits Center, after decamping for a single year to Chicago.