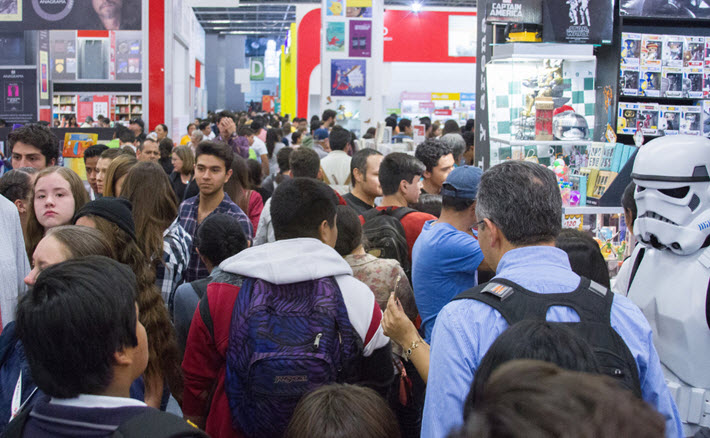 As has been evident in the rise of literary agencies at Guadalajara Book Fair, the road to international markets for Latin American writers is no longer strictly through Spain. ‘Why Does a Chilean Author Have to Pass Through Spain?’

As writer and editor Alberto Ruy Sánchez pointed out, the small number of agencies in the region was a result of Spain’s domination of the publishing market, on which the Latin American market was wholly dependent.

In the 1990s, agents including Mexico’s Angelina Cué Bolaños found it difficult to run profitable businesses. Some agents were forced to pursue more financially viable businesses instead. The Meigas Agency, founded in 1998—and claimed to be Mexico’s first—also ran into difficulties, as it attempted to promote younger, unknown authors, and found that publishers were only willing to bet on writers with established reputations.

Now there are dozens of agencies, principally in Argentina and Mexico. Many of them complement their agency business by offering editorial services.

As opposed to the scenario in Europe and the US, literary agencies aren’t yet a must-have for writers in Latin America. Many first-time authors are able to go directly to publishers, as many still accept unsolicited manuscripts. Editors here trawl the slush pile in search of unpolished gems.

But today, there are new success stories among emerging Latin American literary agencies. At this year’s Guadalajara Book Fair, Chilean agent Adrián Puentes, founder and director of the Puentes Agency, said he launched the agency to prevent works from Latin America having to travel via Spain to enter the US market—either through translations carried out in Spain, or being handled by Spain-based literary agents.

Despite the growing number of publishers in the US that focus on translations—including New Directions, Dalkey Archive Press, And Other Stories, Coffee House Press, and the largest, AmazonCrossing—works in translation still comprise a small proportion of books published in the United States.

But in an encouraging sign, books from Latin America that do get published in the US can be successful, if not necessarily in commercial terms but in terms of receiving favorable reviews. There seems to be growing interest in writers from the region, partly a result of new talent, Puentes said to Publishing Perspectives at Guadalajara, which closed Sunday (December 4).

“More than financial success,” he said, “success for me is when a book reaches its potential readers.”

He cited Chile’s Alejandro Zambra, not an author Puentes represents, but all of whose books are translated into English. Zambra has been the subject of interviews and profiles in publications including The New Yorker, Bomb and Vice, the latter describing him as “more than just the new Bolaño.”

“I asked myself,” Puentes said, “why does a Chilean author, published by a Chilean publisher, have to pass through Spain to reach other Latin American markets such as Argentina, Colombia, or Peru? Because Spain is the traditional hub of the Spanish-language publishing market.

“Why can’t Latin America generate its own direct relationship with the US? That’s where my idea came from to found a Latin American agency, seeking to reach all parts of the world, but directly from Chile.

“There’s a very strong movement of good authors in Latin America at the moment and my agency aims to take charge of them.”

He said he only represents authors from Latin America, but he also acknowledged that the agency’s main focus is the English-speaking world, although he has sold rights in South Korea and China, as well.

Among his authors are Chile’s Matías Celedón, whose novel The Subsidiary was published by Melville House in New York earlier this year, and Argentina’s Ernesto Semán, author of A Brave Pilot From the New China.

“Being an agent is about transmitting enthusiasm for reading,” Puentes said.

Asked whether foreign publishers ask for meetings with him these days, Puentes said it’s now much easier to “fill his agenda” at book fairs.

“But a Latin American literary agent still arouses curiosity,” he said, “because people are much more used to dealing with Spanish agents.

So “we need to transmit the fact that in Latin America there’s a lot of literary talent, and that Latin America is taking on the role” he said, “previously occupied exclusively by Spain in the publishing industry.” This interview at the Guadalajara International Book Fair was on the opinions of the US election held by PRI’s Enrique Ochoa. Image: Gilberto Torres

At Guadalajara, she told Publishing Perspectives that, as Tusquets took a new direction, she was inspired to begin a new chapter, and many of the authors she had worked with decided to follow her. She likes to justify her new venture’s success by quoting Kipling: “If you can meet with triumph and disaster, and treat those two impostors just the same…yours is the Earth and everything that’s in it.”

Flores said that VF is Mexico’s first literary agency and that being an agent is as addictive as being an editor. And she said it takes hard work to find the needle in the haystack. “Quality is primordial,” Flores said, “as it will be a guarantee that real readers will appreciate [work] in the medium- and long-term, assuring a loyal and constant public. But in the short-term, striking the balance between commercial success and quality can create a certain instability that must be handled with care and a strategy.”

It’s impossible to predict “big commercial successes of books of literary quality,” she said, “but sometimes they occur. The unexpected is part of our daily bread.”

She echoed Puentes, in saying that in the past, the only way for a Mexican author to have his or her book distributed in other Latin American countries was through being published by a large publishing house in Spain. But that’s now changing—in part as a result of Spain’s economic crisis—with Mexico now becoming a more important player in the regional publishing scene. The Road to New Markets: Not Always Through Spain

Flores described agents as both the best allies of publishers and also the best intermediaries between authors and their editors. while the relationship between a writer and an agent must be one of “absolute complicity.”

She did say, though, that the relationship between a writer and an agent must be one of “absolute complicity. We are attentive to all trends,” she said, “but we seek works that resist the passing of time. In Mexico it has become more difficult to get published by approaching a publisher without the intermediation of an agency.

“Many of the contracts that we procure for new writers don’t always carry the best conditions, but we offer our writers permanent counseling to achieve the best contract terms, mediating between the editor and the writer. Money is not everything. Finding the best editor for the best writer is the most important.

“It’s also important to secure the best distribution at national and international levels, as well as investing in marketing,” she said.

“And what unites an editor and a literary agent? They’re innately curious and both are negotiators. An agent is a kind of evangelist, spreading the word about good books.”

Flores added that with a newly consolidated catalog, her VF agency will travel to the London and Frankfurt book fairs next year for the first time.

More of our coverage of Guadalajara International Book Fair 2016: