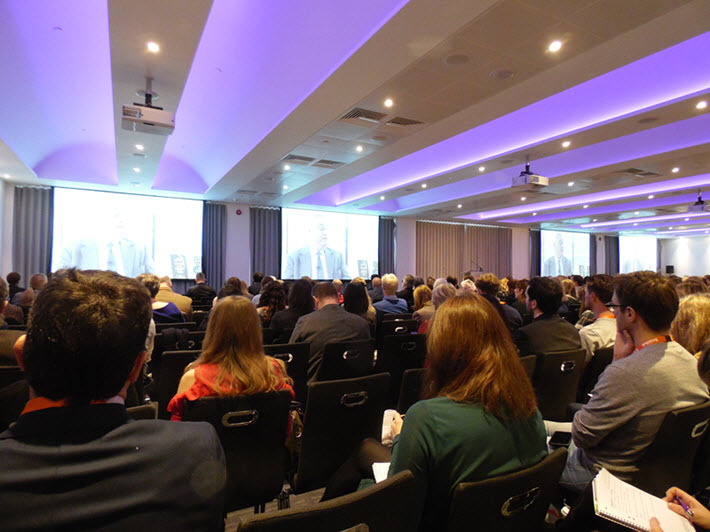 Speakers at the 2016 FutureBook Conference in London emphasized putting disruptive technology to work for book publishers and readers, not fearing it. The FutureBook Conference’s morning plenary watches a video with Tim Hely Hutchinson on not jumping at all that glitters-digital. Image: Porter Anderson

‘The New World Is Demand-Management’

A funny thing happened on the way to the future: the book didn’t get left behind, after all.

That’s a functional if simplistic interpretation of what the more-than 550 attendees at The Bookseller’s annual FutureBook Conference in London on Friday (December 2) found themselves hearing. Now deep into the digital shakedown, the industry seems to be coming to terms with an analog-plus-digital concept for the foreseeable future.

“People who succeed in this age will be those who marry digital and analog.”Andrew Keen

The tone captured by Bookseller editor Philip Jones and his staff—several of whom, including Lisa Campbell and Sarah Shaffi, moderated sessions on Friday—points to an industry no less engaged in changing times than before, but less panicked at the prospect.

"More and more of what we read on the internet isn't true. This is having a huge impact on our culture and politics" – @ajkeen #futurebook16

This gave extra resonance to Digital Talent @ Work’s Eva Appelbaum’s keynote, during which she the late Future Shock author Alvin Toffler: “The illiterate of the 21st century will not be those who cannot read and write, but those who cannot learn, unlearn, and relearn. ”

The arrival of the digital dynamic in the publishing space was so loudly bemoaned by so many in the industry for years that maybe one can say we protested too much. Friday, there was no more fear that print would be swallowed whole by pixel monsters. There wasn’t even much handwringing over younger readers’ attention spans becoming too short.

Instead, the main takeaway of Friday’s conference was that the book is holding its own, even with so many competing digitally enabled entertainments landing on us 24 hours per day.

“The fact that people are still choosing to read and buy books is good,” said Tim Hely Hutchinson, Hachette UK’s articulate CEO in a taped interview that you can see online at The Bookseller. The video of his conversation was shown Friday in the opening sequence of keynotes.

“Books have done remarkably robustly,” he pointed out to Jones and Molly Flatt, especially by comparison to disruptions in other media industries, like music.

Having acquired Neon Play in June, Hachette’s CEO now talks of shutting down some of the company’s apps. He says he’s assuming that less is more when it comes to new ones. And he can name “not a single one” when asked for an example of a “good” book app that has really hit its mark.

Considering this line of commentary, it was probably thoughtful of FutureBook organizers to wait for hours into the afternoon before announcing that Julian Fellowes’ Belgravia app (Orion) won the Best Digital Book of the Year. As we’ve written, that much-ballyhooed entry hasn’t been the success its creators hoped for.

We also heard a series of keynote messages of big things to come; less about how some of those technologies might affect the fundamental resilience of the book. Are These Actionable Insights?

James Whatley’s (Ogilvy and Mather) presentation of video, virtual reality (VR), augmented reality (AR), and chatbots described technology that is no longer shocking. But this could leave us wondering, as Hely Hutchinson is doing aloud these days, about the importance of such technologies for book publishing.

This isn’t to say that publishing can afford to stop innovating. But it reminds us that the book, not the format, should be our core focus.

Whatley revealed that Pokémon Go devotees might spend some 33 minutes at a stretch on the app. That’s even longer than Facebook’s average 25-minute user sessions (don’t tell Zuck). But this, to the industry of literature, on Friday didn’t seem as pertinent as a big interest in old-timey audiobooks. FutureBook’s two new tracks, one focused on audiobook and one ed-tech, on Friday were well-attended.

There’s no doubt that digital distribution, of course, has put wind into the sails—and sales—of audio. Storytel’s Jonas Tellander said during a panel of startups’ observations that audiobooks now are at 15 percent of total the overall Swedish book market now, 25 percent in volume. He foresees audio making up 50 percent of his market’s sales by volume sales in a few years. And Storytel this year will serve some 8 million streams, he said. That’s a lot of people listening to a lot of stories.

But, as the Audio Publishers Association’s Michele Cobb told Publishing Perspectives before speaking, herself, at FutureBook on Friday, it’s hard to see a lot of new format advancement or conceptualization coming into the audiobook space. Like the book itself, audio is appreciated precisely because the format is reliable. The Book Is Fine: Selling It Is the Point

If the real value of this year’s FutureBook lay in getting some emphasis back on the sturdiness of the book with less fear and loathing about the “future”—in Germany, books are the top-named holiday gift  this year—it fell to Bonnier’s chief digital and technical officer, Anki Ahrnell (who spoke so well for us in Singapore at StoryDrive), to tell us where we might put our tech to work.

What Ahrnell looks for first is what a consumer needs, what a reader wants. And nothing she said may have been more important than this: “We’re going from products to services. The challenge is not disruption, it’s [so many] opportunities.

“The old world was a supply-management approach. The new world is demand-management.

“You have to become much smarter in your customer interface,” she told the audience. Appelbaum had talked of how “brave leadership” demands that we “build people ready to function amid upheaval.” She’d also talked about giving those people the go-ahead to react and handle developing situations, themselves.

Was this a shout-out for less micro-management in a day when giving talented staffers their heads could mean moving forward?

In her intro to her “Commercial Opportunities Outside of Books,” HarperCollins’ Sam Missingham talked of the “riches” that are part of a good publishing house’s staff roster—so many talented people and skills that can be under-used if the industry’s bright potential isn’t examined, as Ahrnell stressed, with “service” at the center of our trade universe.

After all, even our best authors in the traditional ranks have embraced digital interaction with the public. Not for nothing did Margaret Atwood test the Wattpad waters all those years ago with zombie tales for the millennials to see if she could reach them: she did.

The message is that it’s time to turn our tech to how we put books into the hands of the readers, how we engage them, what we mean to them. ‘You Have a Long-Lasting Medium’

Concluding the conference, British-born, California-based author Andrew Keen (The Cult of the Amateur, The Internet Is Not the Answer) arrived to do something he’s not famous for doing: reassuring a crowd.

“My advice to you would be to be un-bookish and show off…The analog truthful response will resonate. What you have is enormously valuable.”Andrew Keen

An eager thorn in the side of Silicon Valley, Keen revels in describing damage done to our culture and politics by digital opportunists and the tech-giant corporations.

“The only people who have made money out of this so-called ‘revolution,'” he said, “are Facebook and Google,” which, he said, are selling 85 percent of the advertising on the internet.

And yet, he told us, “the book business’ model has survived” digital’s impact.

“You have a long-lasting medium. You have the book.”

“The book itself has, if you like, metaphysical value,” Keen told us. “‘Digital natives’ is the biggest bollocks you’ve ever heard. The so-called ‘digital natives,’ the kids who grew up with it, are getting very weary of it.

“They will trash their iPhones and they’ll rediscover physical things,” he said. “You’re on the verge of a prosperous era.”

“In the ‘post-truth era,’ you’re the one industry” that may be able to ply the digital channels of political and social emergencies with truth and curation, Keen said.

“My advice to you would be to be un-bookish and show off…The analog truthful response will resonate. What you have is enormously valuable. You should celebrate that and thank God.

“People who succeed in this age will be those who marry digital and analog.”

Have all FutureBook conferences found so much coherence? Probably not. But this one’s emphasis on the service-driven mentality seemed especially relevant and helpful.

“You now have the tech to learn what your consumer wants,” Keen said. “If you do this responsibly and coherently, you’ll do well.”

This is barnstorming stuff. "None of you have innovated. A storm washed around you…But get up and do something now" @ajkeen #futurebook16