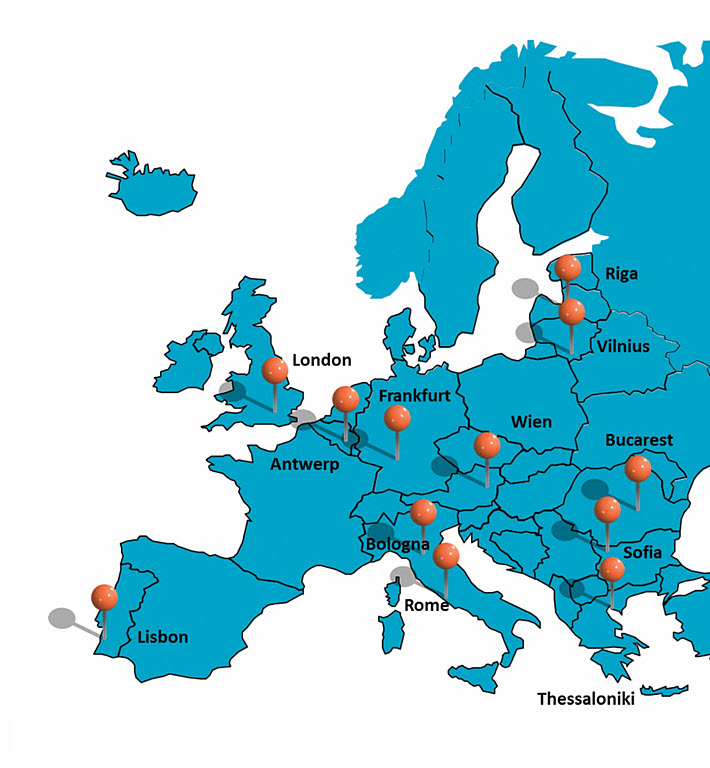 For publishing players looking to know more about entry points into some of Europe’s book markets, Aldus’ new brochure may be useful. While the Aldus network of European book fairs writes its name in all caps, ALDUS, that name, it turns out, is not an acronym. The network is named for the 15th-century Venetian publisher and humanist Aldus Pius Manutius (Aldo Manuzio).

And while Aldus’ newly released European Book Fairs: Facts and Figures (PDF) document is certainly useful, it’s limited to the scope of the network’s membership—and by an opportunity curiously missed to create a comparative sorting of its information.

Some of these events aren’t easily compared to their counterparts. Nevertheless, there’s value here, well worth a few minutes of time for publishing players looking to know more about entry points into Europe’s book markets.

For industry players, one of the most useful aspects of the brochure in PDF form is the ability to simply search for the term “B2B area” and flash through each fair’s “yes” or “no” answer to whether it has a rights-trading center. Check the responses carefully, too.  One fair, for example, reports “All common event spaces, at least four of them each year, are used, when necessary, for B2B gatherings but are not meant exclusively for that.” Translated: No, no rights center but we’re business-friendly.

Those fairs that report they do have dedicated B2B areas are: Other factors, of course, are interesting, too. For example, visitor numbers run from the mighty 277,ooo of Frankfurt—of whom 142,300 are trade visitors—to Riga’s 16,800—800 said to be trade visitors.

Some of the public-facing fairs have impressive numbers indeed: Exhibitor numbers—and ratios of exhibitors to attendees—are fascinating here for their range, as well.

Bucharest’s Bookfest—like Sofia’s event at the city’s beautiful Palace of Culture—presents some 200 exhibitors, while Frankfurt fielded 7,103 this year at Buch Messe.

Those huge crowds in Lisbon are seeing something more than 125 exhibitors. London reports 1,500 exhibitors; Riga 80, with 10 internationally positioned companies in the mix. Clearly, the book fair network encompassed by the Aldus service organization is, as the brochure’s discussion calls it, an “evolving landscape.” What appears to be underway is a gradual ramping up of business elements to what may have begun as festival-style public-facing events.

You see this, of course, in the answers of the surveyed fairs to a question of whether they have a “professional program of meetings and conferences”: only three fairs report no such events

And at the major sites including London and Frankfurt, whole days are devoted to such content—London staged five paid-for conferences last year in addition to its Insights program of targeted seminars that runs throughout the fair, while a professional attendee at Frankfurt typically works to juggle such events with time on the display floors throughout the entire week. The Business Club at Frankfurt, alone, carries a busy schedule of high-level programming throughout the three trade days of the fair, as well as on the day prior to the show’s official opening. What the administration of Aldus might want to consider in future iterations of its overview is a graphic of some sort that offers a quick side-by-side look at the fairs’ responses. All the events are answering the same questions (albeit at times with considerably varied answers) and it should be possible to chart out at least the most basic elements so that industry professionals can quickly assess comparative attributes of each fair.

Indeed, as long as we’re offering extra work to the Aldus staff, an historical stack of these graphics would be intriguing, charting that evolution of the landscape over time, as well as the growth of its own network.

As it stands, however, the “Facts and Figures” document is useful and welcome, with insights into some of the work of these affiliated events in a Europe facing considerable political and economic uncertainty. The report is funded with support from the European Union’s Creative Europe Program, and we’re glad to have it.

News of another European book fair in Moscow is in today’s edition here.