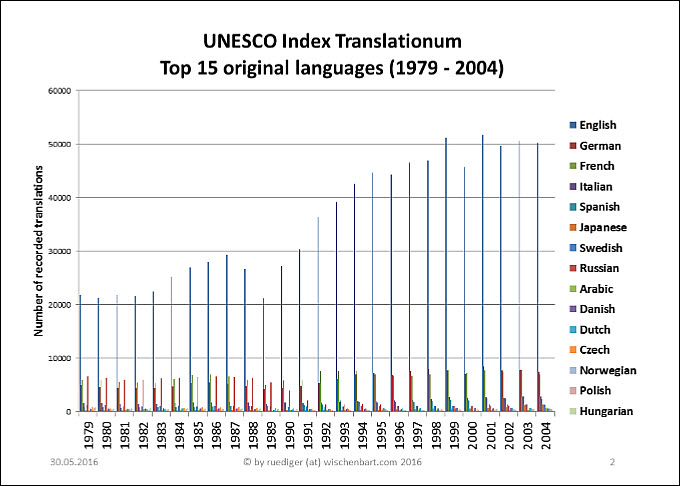 As rights and licensing offer the world publishing industry more and more potential in terms of revenue, the new Diversity Report 2016 explores what works. Wischenbart, who directs Berlin’s Publishers’ Forum conference (coming April 24 and 25) and serves as international affairs director for BookExpo, goes on to say that “together with Italian and Spanish, these top five original languages cover most of the spectacular increase in translations” between 1979 and 2004.

“But also one big loser can be identified,” Wischenbart writes: “Russian, whose wild popularity collapsed quickly with the Soviet imperium after 1991.”

The focus here has two important parameters: “diversity,” in this context, refers to “flows of literary translation.” And the world context in this work is book markets of Europe.

With primary emphases on Germany, France, Spain, Poland, and Sweden, a goal here is “to better understand how some authors are being successfully translated into different languages, while distinct barriers curtail other works of fiction from traveling beyond their original linguistic realms.”

Across a dozen languages and the work of almost 250 authors, Wischenbart is looking for “what makes some books, and their authors, find multiple reading audiences while others are recognized just by their domestic readership.”

Clearly, when Frankfurt Book Fair’s Literary Agents and Scouts Center (the “LitAg”) sells out its 460 tables by early spring for the October fair, as happened this year, there’s keen interest in the translation rights markets.

Among new models, Wischenbart considers AmazonCrossing, now rated by translation expert Chad Post as the top producer of translations. You can read about some of the work of this imprint of Amazon Publishing in our interviews with Finland’s Katja Kettu and editor Gabriella Page-Fort and with Poland’s Zygmunt Miłoszewski and translator Antonia Lloyd-Jones, and our London Book Fair look at the imprint’s expansion.

While he seems a bit skeptical of the approach of translating more than literary fiction (the imprint selects what it feels is worthy genre work, as well), Wischenbart is looking in the right direction for where, as he notes that “re-thinking, re-organizing, and re-directing” translation is the issue now.

Worrying, as many of us do, about the health of literary fiction in the digital era, he writes:

“Each and every one acknowledges that in literary fiction, average print runs have significantly fallen in recent years, while advance payments have risen for the few top authors, the pressure from a few outstanding bestsellers has increased, so that in the end, it has become ever more challenging to sustain book publishing as a viable business.

“In this context, the extra cost of a translation, and disputes about the ‘fair’ compensation of authors, and also of translators, have added additional risk in that traditional model for making books, stories and ideas travel across linguistic boundaries.”

He seizes, however, on what many see as  an answer, one reflected in how AmazonCrossing, this year alone, will produce work from 22 countries in 16 languages: opening new markets to translation pairs may be key.

Perhaps “stakeholders should look beyond Europe (and North America),” Wischenbart writes, “and become aware of new reading audiences in many regions around the world, in Brazil and Mexico, in South Africa and in the Emirates, India, China, Korea, Japan, to just name a few.”

And he deftly sums up what makes this seem particularly critical today:  “When ‘rights and licenses’ often are seen as the only imminent sector of growth in traditional publishing,” we look to translators who “have always taken up the role of cultural mediators, and added income as scouts from their often meager translation fees.

“The Internet opens the reach of such an extended approach,” Wischenbart writes, for the publishing player who “becomes an organizer of a dedicated professional network.”

Early material is being released about the 2017 Publishers’ Forum program in Berlin here.