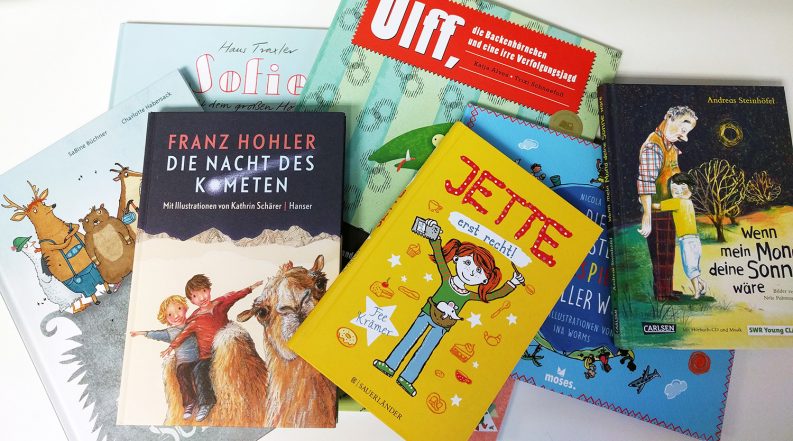 A selection of books from the 2016 German Children’s Books on Tour collection, recommended for translation into English by the German Book Office New York

The German Book Office New York (GBO) and Publishing Perspectives are proud to announce Matthew Anderson as the winner of the 2016 Children’s Books on Tour NYC Translation Competition, and Rebecca Heier as the runner-up. The competition was organized to identify talented, up-and-coming translators of German children’s books.

“We were very pleased with the quality of the submissions we received, and it wasn’t easy to choose a winner. Matthew Anderson’s translation stood out to us as the most faithful and fluid interpretation of the original German text.

“We were looking for translators who successfully communicated the meaning of the original text, but the deciding differentiator was the fluidity of the English text.

“We liked the colloquial feel of Anderson’s translation. The solutions he found to some of the tricky German phrases resulted in smooth, fluid English.” Competition participants were given an excerpt of Wenn mein Mond deine Sonne wäre by Adreas Steinhöfel (for rights information, contact Carlsen Verlag) to translate from German into English. The competition received a total of 41 submissions.

“After Germany’s Guest of Honor presentation at the Bologna Book Fair this year and our most recent children’s books editor’s trip in June, we realized that this was overdue,” said Stock of the competition.

“Especially with picture books, I can see a potential for the English-language market that still needs to be explored.”

“I think it’s fantastic that children’s books are starting to come into the conversation now, too,” said Lauffer, one of competition’s top five translators. “We bemoan the lack of works in translation in the market overall, which is of course legitimate, but let’s work on educating the new generation of readers to become more open-minded to international literature.” When asked about the challenges of translating children’s books, Anderson said, “For me, the most difficult aspect of translating children’s books is finding the appropriate tone for the target audience. Adults often talk to (and about) children quite differently across cultures, and what may sound pleasantly paternal in one language may come across as excessively patronizing in another.”

Anderson is a graduate student pursuing a Ph.D. in Germanic Studies at the University of Texas. His dissertation is on “the impact of illustration on the development of the adolescent adventure novel in nineteenth-century Germany.” Heier believes that both translators and publishers should work together to decide how best to handle cultural references in children’s books. “How much of a foreign feel do we want to keep in a story, especially one meant for children?” she asks. “Names of TV programs, local celebrities, food brands—the list is long.”

Heier was born, raised, and educated in the United States but has been living in Germany since 1992. She has an MFA in Literary Translation and was selected to participate in New Books in German’s Emerging Translators program. Her translations have been published in various online journals.

The top five translators will be recognized tonight (December 1) at an event in New York City, “Children’s Books on Tour.” Competition jury member Daniel Slager will be joined by Emily Clement, editor at Arthur A. Levine Books/Scholastic, for an onstage discussion about editing, publishing, and translating children’s books. A networking reception for editors and translators will follow.

In a short interview with Publishing Perspectives on publishing translations, Slager said, “I think diversity of perspectives is very important in any publishing program. I also think international books and authors represent an excellent opportunity for American publishers of books for young readers.”

Following the discussion, the event will also showcase a selection of children’s and YA books from Germany that are suited for the American market. And further information will be available about the GBO’s upcoming Children’s Book Editors Trip to Germany (June 25 to July 1, 2017). Apply here before February 28, 2017.