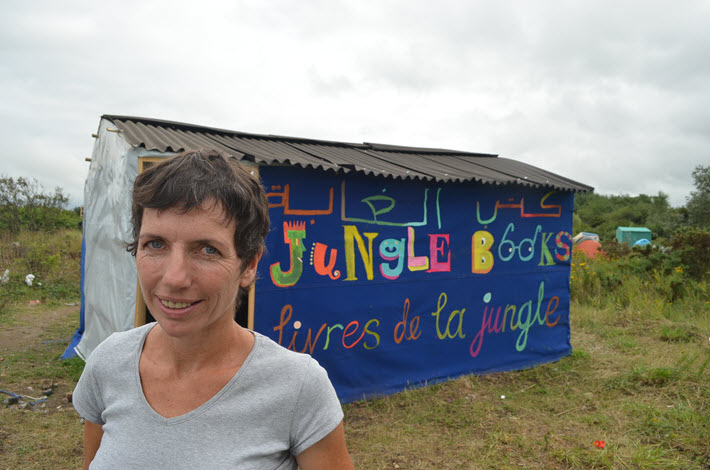 ‘I could write a book,’ says Mary Jones, who led the creation of the now-closed Calais refugee camp’s Jungle Library. ‘It all feels a bit surreal.’ Mary Jones at the Jungle Library in the Calais camp, 2015. Image: Roger Tagholm

A widely covered report from the Refugee Youth Service indicates that roughly one in three of 179 children displaced by the October closing of “the Jungle” camp at Calais are missing. Most now live in French children’s homes, according to The Independent’s article. As Roger Tagholm tells us, the evacuation of the camp also signaled the demise of the camp’s Jungle Library.—Porter Anderson

‘We Saved the Front Panel of the Library’

Jungle Books is no more.  The makeshift library established by British teacher Mary Jones in the famous ‘Jungle’ migrant camp in Calais has been cleared away. So have the dozens of temporary dwellings, the wooden churches, the cafes and ramshackle restaurants and bike repair shops that were home for up to 3,000 migrants trying to reach the UK during the last five years.

“You can’t stop wars, but with technology you can bring learning to them so they won’t have to risk their lives to have that education.”Mary Jones

The library caught the imagination of the UK book trade and the media after Publishing Perspectives reported on its existence in August last year.  Pieces appeared in The Bookseller;  The Guardian; and The World Post.

The Big Green Bookshop in north London’s Wood Green issued an appeal for books, which The Bookseller reported was so successful that Jones said she didn’t want any more books. Instead, she said, she needed money to buy small generators to provide electricity—so the refugees could read the books at night.

And now?  Speaking from her home in Amiens, around 160 kilometers from the camp, Jones sounds almost dazed.  She has devoted some two years of her life to the project, leaving her teaching job to put more time into the camp while running a household of three children, three horses, and two cats. In September, she spent 34 hours in police custody in Calais after losing a court case to protect The Kids Café she established, along with other restaurants at the camp.

“To be honest,” Jones says, “now that the Jungle has gone, it all feels a bit surreal.  I was so immersed in it for 18 months–now I’m just getting my life back.

“We tried to save some of the buildings, but it wasn’t possible.

“We’ve saved the front panel of the library and that’s in the Auberge warehouse in Calais, which belongs to the French charity L’Auberge des Migrants.  I may donate the front panel to the Migration Museum in London, which is an ongoing project.  They had a temporary exhibition earlier this year, which included some audio, and lots of people made reference to Jungle Books.”

Jones says she likes the fact that before the camp’s demolition, most of the books were gone.

“I looked in on the library just before the Jungle camp was cleared and the shelves were almost completely empty.  The books had all gone.  But I didn’t mind this.  I thought this was a good way for it to end.  People were taking books with them.

“It was really always more a book depository than a library.  People would come and take books with them, and that was fine.” A class at the Jungle. Image – Mary Jones

‘Huge Demand for Pashtu and Farsi’

The Jungle Books library–like the one established by Occupy protesters outside St. Paul’s in 2011–will be remembered as one of those curious offshoots of the literary world, a place where books, the context of a library, offered sanctuary.

Jones says that at its height, the library’s most popular books were graded readers, language books, and dictionaries that covered the many languages spoken at the camp, including Tigrinya (Eritrea); Amharic (Ethiopia and some parts of Eritrea); Kurdish (Turkey, Syria, N Iraq, NW Iran); Urdu (Pakistan); Pashto (Afghanistan, Pakistan, Iran); Farsi (Iran); and Dari (Afghanistan).

In particular, she says “there was huge demand for Pashtu and Farsi.”

Donations of books were, she tells Publishing Perspectives, persistent and generous.

“It must be in the thousands,” she says. “It was incredible.  People would come every weekend with boxes of books in their cars.  We had so many books.  We would encourage migrants to take them–this was handing them on and it was good to see.  It was lovely to see books having a new life.”

Jones says her happiest memories are of the bonds formed between volunteers and refugees, and of “how fond they were of the place.

“People built friendships here.  Jungle Books gave them a quiet space and a bit of normality.  There was a closeness between teachers and students, and we had a number of refugee teachers.

“Once Jungle Books was up and running, being staffed by volunteers, with regular lessons going on in four classrooms we had around Jungle Books, I shifted my attention to The Kids Café. I was hands-off and the place ran itself.

“In the summer, when lots of people were giving time, we had lots of teachers from the UK. A lot of migrants wanted to learn English because they wanted to go to the UK.

“But when things tightened up, it changed. People decided they wanted to stay in France and so they wanted French lessons.”

In the early days, many of the inhabitants of the camp were trying to reach the UK illegally, by hiding in lorries or beneath trains.

“At the start a lot made it,” Jones says. “The refugee volunteers would lock the library in the evening and then in the morning, when we went over, it would still be locked.  We’d have to break the lock because the volunteers were in the UK with the key!”

In addition to trying to reclaim her life and earn a living–a contract with Save the Children finished recently–Jones says she remains keen on helping refugees in any way she can.  She has a master’s degree in development management and is interested in exploring educational projects.

“A lot of refugees have started studying at university in France. In Lille, for example, the university is offering a free year of French, and other universities are hoping to put this project into place, too.”Mary Jones

“There are a number of things I’m looking at,” she says. “Some families were sending their children away, dreaming that their kids would have a better future.  We were giving them lessons in basic English.  I’d like to help people not to have to make that journey in the first place.

“You can’t stop wars, but with technology you can bring learning to them so they won’t have to risk their lives to have that education.  So I’d like to look at online learning and there are two charities in Afghanistan that are interested.

“Also, a lot of refugees have started studying at university in France. In Lille, for example, the university is offering a free year of French, and other universities are hoping to put this project into place, too.  That might be something I can support in the future, to help spread it out.

“More immediately, I’m about to see children at a center about 30 kilometers away.  They’re children from Afghanistan who were at the camp and I want to see how they are.  I’m taking them a cricket set and some mobiles.”

She says she continues to hear from refugees who were at the camp at Calais.

“I’ve had calls from people who just say ‘thank you.’  The other day, someone who’d been in the UK but had to leave—and who’d been in France and then managed to get back to the UK–they rang me and said they wanted to donate to Jungle Books, which was so nice.

“It has all been quite a journey for me,” she says. “I could write a book.” A reported 6,400 people were evicted from the Calais Jungle refugee camp in October. Image from 2015: Roger Tagholm