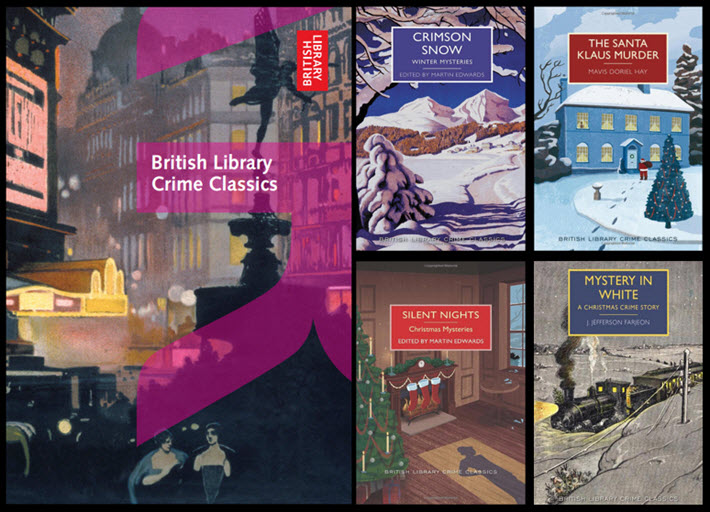 A hit two holiday seasons ago has encouraged genre publishing in an unlikely and vaunted setting: The British Library is ready to stuff stockings with vintage crime novels. In 2014, British Library Publishing reissued a forgotten 1937 crime classic, Mystery in White: A Christmas Crime Story by J. Jefferson Farjeon, only to see it become one of the surprise hits of the Christmas book-buying season.

This holiday season, the catalogue includes nearly 40 vintage crime novels from the golden era of the genre.

Some might be surprised. After all, this division of Britain’s national library is home to medieval manuscripts, maps, the Magna Carta, a Gutenberg Bible, and the handwritten lyrics of the Beatles. And now it’s a successful publisher of genre fiction?

To get some clues as to this unlikely success story, Publishing Perspectives met with editorial and rights manager Robert Davies.

Standing at the entrance hall of the British Library in its modern building near King’s Cross, you might be surprised to see what looks like a country house to your right. Closer inspection reveals, however, that this is in fact the library’s latest pop-up shop—devoted to the institution’s classic crime fiction. Peering through the window reveals a lovingly-recreated facsimile of a festive drawing room-cum-library, with copies of such Christmassy mysteries as Crimson Snow and Silent Nights—collections edited by Martin Edwards—and The Santa Klaus Murder by Mavis Hay, all piled high amid candelabra and seasonal wreaths.

Davies says that this august institution has become associated with that most British of forms, cozies, partly by accident.

“My predecessor in this job,” he says, “about five years ago, saw a newspaper article that mentioned that The Notting Hill Mystery was the first ever detective novel; it was published in about 1865, and had been out of print for about 150 years.

“So really, just as an experiment, she looked and saw that the library had a very rare surviving first edition copy. We decided to republish it and see what people thought. And the response was much warmer than we expected and the series has really grown from there.”

Publishing the crime classics actually fits very neatly into the division’s remit “to publish books that increase people’s understanding of and access to the library’s collections.” It allows the library to”reach a new community of readers using material that the library owns.”

“You can go into a lot of independent bookshops and branches of Waterstones around the country, and there’ll be a table devoted to these books.”Robert Davies

As one of the UK’s five legal depository libraries, the British Library is entitled to receive a copy of every book published in the country. This kind of publication helps readers “understand the breadth of what the library collects”—not just ancient manuscripts but also fiction and periodicals. The program also generates revenue, an increasingly important factor these days.

After the success of The Notting Hill Mystery, the move from the Victorian era into the so-called golden age of crime–between the two world wars–was a logical one.

“It was obvious to us,” Davies says, “when we started moving into 1930s crime that people were continuing to read and buy Agatha Christie in large numbers, and that there was a real taste for classic crime fiction of that kind. But it was ill-served by publishers. Apart from perhaps four or five authors in that period, the great crime queens of the time, a lot of the work by their peers and competitors had been allowed to slip out of print almost as soon as it was published.

“I thought, if people love Agatha Christie, Dorothy L. Sayers, and Margery Allingham to this day, then they’d probably like other people—perhaps not in the same league as the great heavyweight contributors to the genre, but authors who wrote books that people would probably enjoy reading now.

“So, it was just a question of finding what they were and packaging them in a way that appeals.” Another display of Crime Classics series books with other offerings. Image: Alastair Horne

That packaging has clearly been a key factor in the books’ success. “The visual identity has been absolutely crucial,” Davies says.

“Most of the covers are from railway posters from the 1930s,” he says, “which are from the National Railway Museum collection. Where we’re looking for books with a very specific setting, where there isn’t a railway poster that exists for that theme–for instance, a book set in a circus–we’re commissioning contemporary illustration in a style to match.”

That presentational consistency makes it easier for the books to be sold as a series, which helps get buy-in from retailers, Davies says.

“These books look like a collectable series and they’re cleverly branded as a physical object. You can go into a lot of independent bookshops and branches of Waterstones around the country, and there’ll be a table devoted to these books.”

The books’ desirability as physical objects is also reflected in lower-than-usual digital sales, Davies says. “I think we’d estimate up to around 5 percent” of copies sold are digital, “whereas I hear from other crime publishers that a typical ebook sales figure is around 25 to 30 percent.”

Readers Who Are ‘Talkative Amongst Themselves’

Another factor is the library’s willingness to engage with its audience. Davies modestly says when asked if more conventional publishers could learn anything from their success, “It would be laughably arrogant for a publisher of our scale to start giving other people lessons.” But it’s clear that the British Library’s level of interaction with its reading audience is extensive.

“We’re publishing for a community that’s very active, very engaged, and very talkative amongst themselves,” he says, “and it didn’t take very long–or a great deal of effort–to break into that community, to start talking to bloggers. “We’ve organized events at the library. There’s a convention once a year called Bodies From the Library that people come along to. They talk to us, and we talk to them, and we listen to their ideas. They’ve often read hundreds or thousands of these books; they’re desperate to see them back in print, and they’ve got fantastic ideas and suggestions about where we should go next, and titles we should consider. So, we listen to people, and that’s been crucial.”

Series consultant Martin Edwards, whom Davies calls “probably the world’s leading authority on British crime fiction of the classic period,” is also a major influence: “I’m in constant contact with him, asking for suggestions of things to read.”

Following up on these suggestions can be a complicated business. Although the titles the British Library publishes are all out of print, very few are out of copyright, so getting permission to republish them has involved the library in some detective work of its own. “We’re having to do genealogical research,” Davies says. “We spent a fair bit of time on Genes Reunited or ordering copies of wills to get in touch with people’s descendants and copyright-holders and negotiate deals with them.”

Many are delighted by the attention: “They might be aware that a grandparent wrote books and was published, and they might have copies of them, but they’ve long since lost any hope of them being republished or finding a new readership. So, they’re often incredibly excited to receive some contact from us, and quite happy to work with us.”

Looking to the future, Davies says that next year will see the crime fiction releases continue monthly—”That seems to be the rate that readers want to see them at”—along with more publishing in complementary series, such as Classic Thrillers.

“We’ve published three books this year by Eric Ambler,” says Davies. “He’s seen as one of the great authors of British espionage fiction–maybe after John le Carré. But only five of his books were in print in the UK, so we’ve brought three more back into print.

“That’s the kind of thing we’re looking to do, to build on the success of classic crime in other strands and other genres.”