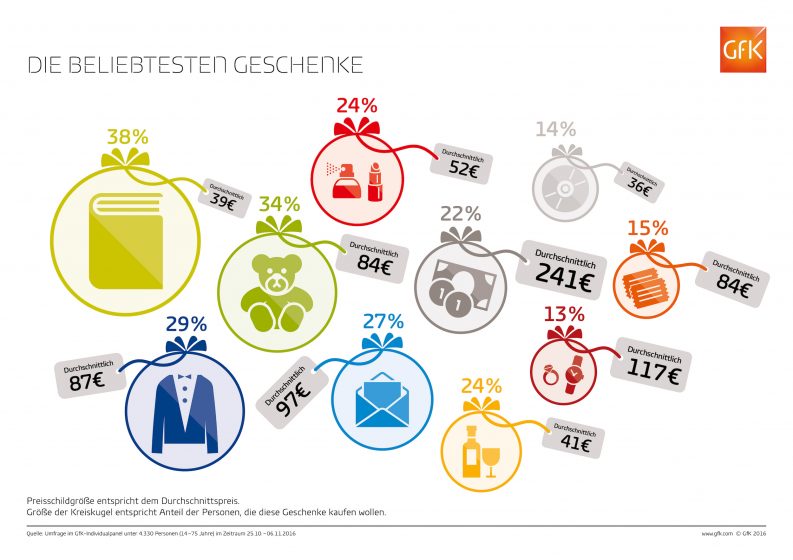 Thirty-eight percent of Germans plan to spend an average of €39 on books as gifts this holiday season, according to market research firm GfK. Favorite holiday gifts in Germany and the average amount consumers plan to spend on each category, according to a market research study by GfK

Each year in October and November the Gesellschaft für Konsumforschung (GfK, Society for Consumer Research) conducts a study asking a representative number of Germans between ages 14 and 75 about their holiday gift-giving plans: what and how much they’ll give to their loved ones. Below are the key findings for 2016.

Once again, books are the favorite Christmas present this year listed by those surveyed: 38 percent of respondents say they plan to give reading material as gifts and are willing to spend €39 ($US41) in this category. Last year, books were also the favorite present among 37 percent of people, who reported a potential spend of €40.

GfK estimates potential book sales of €953 million from holiday gift givers. If we include gift vouchers—which respondents indicate will be given by 27 percent of gift givers at an average value of €97—revenue from book sales might go up even further. There’s a chance that 2016 holiday book sales will overtake last year’s revenue of €977 million.

Gift voucher spending is expected to increase from €63 million in 2015 to €82 million in 2016. The reason for this, GfK speculates, could have to do with more people giving ebooks as gifts this year.

Next to “real” presents, cash is still king: “Cash will once again be a popular gift. It’s most likely to make the cash registers ring after the holidays,” says Dr. Wolfgang Adlwarth of GfK. He estimates that €3.5 billion will be given in cash this holiday season.

Although books are the overall favorite German Christmas present, there’s a clear bias in who’s buying them: 42 percent of women prefer giving books, while only 33 percent of men do. Also, being “middle-aged” (between 35 and 44 years) makes you more likely to buy books as holiday gifts: 47 percent vs. roughly 35 percent with both the 14-to-24-year-olds and the over-55s.