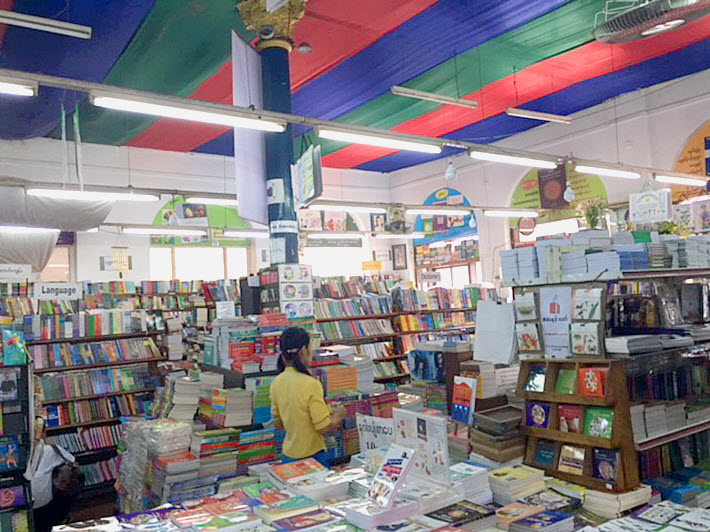 In a land of nearly 2,000 small book publishers, Myanmar’s post-junta industry is strengthening its ties to ASEAN and serving a youthful demographic. In a bookshop in Rangon, which is said to have about 25 independent bookstores. Image: Claudia Kaiser

In her travels to many markets of the world, our Frankfurt Book Fair colleague Claudia Kaiser often sees emerging publishing industries in sharp relief. Today, she talks with the Myanmar Publishers Association’s leadership to get a handle on what the trade faces in a country in which, she’s told, “The good news is that censorship has ceased.”—Porter Anderson

A glimpse into a different world: Myanmar is a country with a population of almost 56 million—of which 43 percent is younger than age 24.

A young country needs lots of content, and in Myanmar it comes mostly in the form of books. Publishing Perspectives visited the second Winter Book Fair in Yangon. It’s a book bazaar established to push sales to the general public and organized by the Myanmar Publishers Association. The organization’s president is Tha Tun Oo and its general secretary is Myo Aung.

“Altogether the book publishing and bookselling industry in Myanmar is facing huge challenges,” says Myo Aung, with Tha Tun Oo’s agreement. They’re both publishers and have their own bookshops. Tha Tun Oo runs the Today Group which publishes around 25 titles per year in business, management, self-help, and children’s literature. He also publishes four magazines and runs six bookshops and a consultancy named the Creative Agency in Yangon. In 1994, he participated in the Stanford Publishing Courses for Professionals program, which was discontinued in 2009. Myo Aung entered the field of publishing after a career in other media—he was a journalist for a time—and he now is the exclusive printer for The New York Times in Myanmar and imports other newspapers. He says The Nikkei Asian Review from Japan is doing really well.

He began publishing in 1996 with a focus on children’s books, and is the founder of the ISBN agency for Myanmar. ‘No Way To Buy Books’

“I don’t even know where to start when talking about our challenges,” says Tha Tun Oo.

“First, there’s distribution. With our infrastructure in bad shape, logistics aren’t any better, and therefore distribution is a huge issue. We have only about 25 independent bookshops in Yangon (a city of six million), fewer in our second city, Mandalay. And in the other 339 cities there’s no way to buy books, other than textbooks.

What’s more, “piracy is huge,” Myo Aung says, “in this country where we don’t have proper copyright legislation. The old British legislation from 1914 is the latest we have. We’ve been talking about a new copyright law for the past 10 years, and we’re waiting for it to be passed by the new parliament.

“We’d been hoping for this to happen in mid-2016. We’d then become a signatory of the international copyright conventions like Berne and could start trading internationally,” he says, referring to the Berne Convention for the Protection of Literary and Artistic Works, first accepted in 1886. “But at the moment, we just lose business all the time.”

One of Myo Aung’s publisher-colleagues points out that some sellers offer memory sticks with 250 books on them on the internet for as little as US$18. The publishers association is trying to take action but without concrete legislation, progress is difficult the publishers say. ‘A Steep Increase in Political Books’

“I do believe this period” of the junta’s rule “took away some of our  creativity. That’s so sad and it takes so long to rebuild it.”Tha Tun Oo

Another huge challenge is translation, Myo Aung and Tha Tun Oo say. The few translators able to provide proper translations would prefer to work for NGOs, non-governmental organizations, because they pay more than the publishers can afford to offer. The higher rates would make book prices go up, as well. And, for that matter, they say, it’s expected that when the international copyright conventions are signed, prices will go up, too, because licensing fees will come into play.

“The good news,” says Tha Tun Oo, “is that censorship has ceased, at least in the book industry. Before 2012 when censorship was lifted, we had to submit our manuscripts to the censorship office” for approval. And once a book was approved and printed, the authorities wanted to see the finished edition, too.

“There was no playing around with these kind of laws,” he says. “They would get you in no time. Since 2012, that’s all gone and we can publish whatever we want, as long as we’re registered as publishers and receive the license.

“Right now we see a steep increase in political books, a hunger  for material that was banned beginning in 1962,” when the March 2 coup d’etat instituted military rule in what was then called Burma.

“I do believe this period took away some of our  creativity,” he says. “That’s so sad and it takes so long to rebuild it. And, as in many other countries today, our young people are preoccupied with messaging each other on Facebook and Viber.” Myanmar’s publishers association was set up in 2012 to help publishers overcome some of the most pressing challenges in the post-junta period.

There are some 1,900 publishers in Myanmar, according to the association, but only 20 or so are able to publish more than 20 or 25 titles per year. Some publish only one or two titles per year, hoping that such modest output will lead to a money-making business. “When they realize how much work is involved,” says Tha Tun Oo, “they stop.”

Tha Tun Oo and Myo Aung also say that their industry needs education. Publishers, they say, frequently don’t understand why ISBNs are important. Some of the larger houses instead use barcodes from supermarkets that sell their books. While Myanmar produced more than 14,000 new publications in 2015, the association says, the number of ISBNs distributed may be no more than 400 each year, since 2013.

Myo Aung, an alumnus of Frankfurt Book Fair’s 2015 Invitation Program, says that the key is creating more awareness of the industry overall among Myanmar’s publishers.

“Being in Frankfurt,” he says, “was a big eye-opener. This country needs new content and we want to find ways of making publishers visit other fairs to understand what’s happening outside and to bring in new content.

Chances are good that the event will happen: Myanmar’s new minister for information, Pe Myint, is a translator, a former journalist, and an author, and has an interest in moving the country’s publishing industry forward. He also is involved in the establishment of a Literature House in Yangon—as reported by Publishing Perspectives—in cooperation with PEN Myanmar and the Norwegian Hedda Foundation. It’s expected to open its doors in 2017.

Among the country’s potential, the best news may be that people in Myanmar still read. The downtown area in Yangon with its stunningly big and beautiful if slowly decomposing colonial buildings hosts a number of bookshops. With luck, the rents won’t rise too much for the shops, something surely hoped by anyone who sits in these little cafés in a warm December sun at the book fair, talking with the publishers of Myanmar.