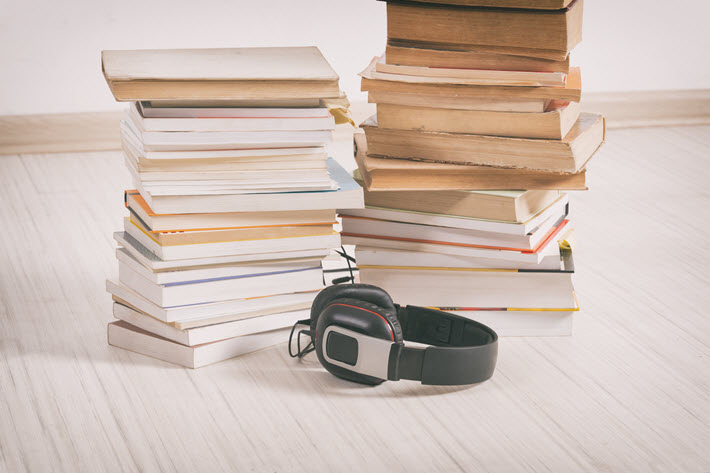 A BookNet Canada study reveals growing sales and library circulation of audiobooks, but consumers are having some problems finding the audiobooks they want. From ‘Are You Still Listening? Audiobook Use in Canada’ from BookNet Canada

Positive reports from The FutureBook Conference indicate that audiobook use is on the rise, especially in the US, the UK, and Sweden. In Canada, audiobook use has been the focus of an in-depth survey.

At the end of last month, BookNet Canada released Are You Still Listening? Audiobook Use in Canada 2016, a survey of audiobook consumers, who they are, what they’re listening to, how long they listen, how much they pay for audiobooks, where they get them, and other factors that provide a snapshot of audiobook use in Canada.

The report follows up on results from a March 2015 survey, Listen Up: Audiobook Use in Canada. In both studies, researchers surveyed 400 adult Canadians who reported they’d listened to at least one audiobook in the past year.

A comparison of the two BookNet reports suggests that Canadians’ interest in audiobooks is increasing. Publishing Perspectives spoke with Noah Genner, BookNet Canada’s president and CEO, who confirms that audiobook consumption appears to be expanding. “Yes, definitely growing,” he says. “In the small amount of sales and consumer data we have access to, we’re seeing growth in the format. Anecdotally, there appears to be a growing interest and/or demand from Canadian readers, listeners, buyers.”

More users are listening to five or fewer books per month, which may indicate, the survey analysis suggests, that more users are sampling audiobooks. Fifty percent of survey respondents said they use the sampling feature in audiobooks. From ‘Are You Still Listening? Audiobook Use in Canada’ from BookNet Canada

As in Other Formats: Discoverability Concerns

How much are listeners spending on audiobooks?

Thirty-one percent of respondents acquired audiobooks free of charge, either from the library, Genner says, or from other legal free online source such as Librivox. Most get their downloads from either Amazon.ca or Audible (40 percent), and just under 6 percent (down from 12 percent) say they’re interested in listening to a book they have already read or listened to.

On a few points of comparison, Canadian listeners are similar to their international counterparts.

In addition to demographic information, the survey also reports on user preferences and their ability to find what they want that. At FutureBook, Hachette’s Louisa Livingston reports: “Discoverability is a real issue for some—one in five [surveyed] just didn’t know where to find an audiobook.”

BookNet, too, reports that roughly 35 percent of listeners are never, rarely, or only sometimes able to find the books they want to read. This figure is an improvement, however, over 2014.

BookNet explores in some depth the ways listeners find their next books. Overall, recommendations from friends and books received as gifts, both at 28 percent, are how most users find their next read. In the age of the algorithm, these discoverability methods suggest that a personal connection is still important to some readers. Bestseller lists (20 percent), the library (18 percent) and book reviews (18 percent) are also popular sources for book discovery. Book recommendations from social media are down slightly from 2014.

This data is also parsed by gender, and shows again that women rely more on bestseller lists and friend recommendations, while men look to online retailer Web sites and social media.

In categories, listeners in Canada much prefer fiction, with mystery and detective titles as first choices, followed closely by general fiction and literary fiction. Romance comes third. In the UK, Jo Henry of Nielsen reported at FutureBook that the genre of choice is crime and thriller, and Agatha Christie, curiously, tops the author charts. Narrators and a Big Jump in Mobile

Some especially strong reader preferences are revealed in the BookNet survey results.

Another striking finding is the rapid uptake of mobile phones as the preferred device for audiobook listening. From 2014 to 2016, use of phones jumped from 16.7 to 44.5 percent. In the same period, the use of every other listening method declined. Preference for mobile corresponds, too, with the survey’s finding that users overwhelmingly choose digital downloads over audio CDs, at almost 80 percent.

There’s a wealth of additional information about Canadian book users in “Are You Still Listening?”

For instance, for daily readers, print remains the format of choice, but for less frequent readers and users, audiobooks are catching up to print and far surpass ebooks.

We also learn that Canadians continue to be somewhat ambivalent about book bundling, and aren’t especially interested in consuming books across multiple formats.

And finally, the report confirms what we’ve long suspected. Why do listeners prefer audiobooks? “It helps me multitask.”